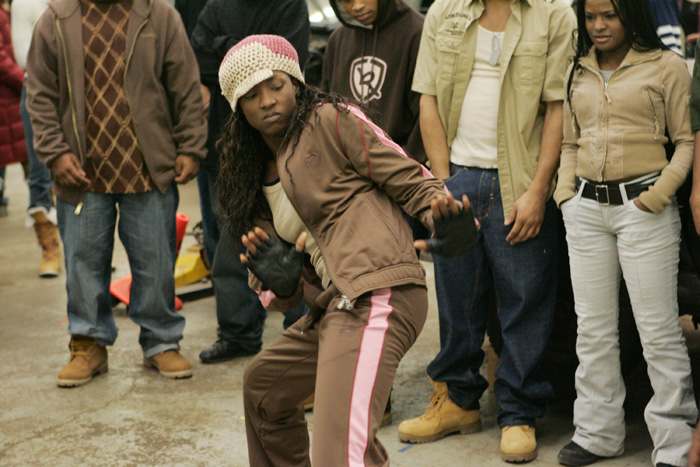 Raya Green (Rutina Wesley) was well on the road to fulfilling her dreams to becoming a doctor. But fate steps in and the money her parents scrimped and saved for her was sucked up trying to help Raya's now-dead junkie sister. Now, the bright young woman has to give up her prestigious education and return to the mean streets of her youth where step dancing may offer her a way to win back her dreams if Raya can show "How She Move."

While "How She Move" is a mish-mash of plotlines that oftentimes goes nowhere, the real reason to see the film is the energy of the dance and the wonderful choreography displayed by the characters that populate the step stages. Things like the rivalry between Raya and former friend Michelle (Tre Armsrong) that runs sometimes tense, sometimes friendly, with no rhyme or reason. Then there is Raya's propensity to jump ship to dance on another crew not once, not twice, but three times, so loyalty does not seem to be one of her strengths. There is other unfinished story threads that first time screenwriter Annmarie Morais puts in but never ties up. But, we're not here for the story (but it would not have hurt if more care were given to that story), we're her for the dance. And, there is loads of highly entertaining, energetic stomping choreographed by Hi-Hat that makes "How She Move" worth the watch - especially for the youth market that will appreciate the many varied dance numbers as the players prepare for the big Monster Step Competition. That comp, where the best of the best step dance crews trek to Chicago for a $50000 prize, uses MTV-style three-second edits (well and stylishly shot by cinematographer Andre Pienaar) to good affect. (This is, after all, an MTV production.) The stars of "How She Move" are attractive and impressive in their dance moves. Newcomer Rutina Wesley has the looks (with a dazzling smile) as she moves to be the first woman to break into the big money-winning, male-dominated step crews. Dwain Murphy makes his debut as Bishop, Raya's long time friend, mentor and, maybe, love interest who helps her in her vision quest. Murphy is likable as an actor and no slouch with his dancing. The rest of the young cast makes the dance, if not the movie (not their fault), worth the time. Director Ian Iqbal Rashid handles his youthful players and their well-staged dancing effectively. Given a better screenplay, he might have made this a more memorable movie, dance notwithstanding. Music, by Andrew Lockington, uses the necessarily heavy percussion of the stomping step dancers to good effect. (I love heavy percussion when done well.) "How She Move" is not aimed at an old film critic like me, though I thoroughly enjoyed the many dance numbers. Its youthful target audience, judging from the positive reaction I saw at a screening, is in for a visually and audibly exciting good time.