How Much Do You Love Me? (Combien tu m'aimes?) 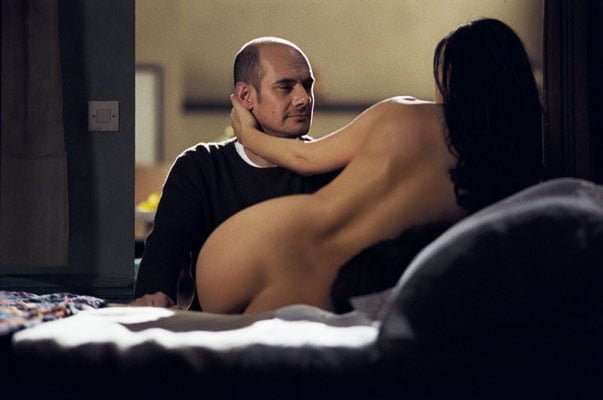 Francois (Bernard Campan) is a dull, unattractive, pointy-eared worker drone with a weak ticker and a solitary, lonely life. That changes when he wins 4+ million Euros in the lottery and passes by a particular window in Paris's notorious Place Pigalle, where spies beautiful prostitute Daniela (Monica Bellucci). This gives him an idea that may end his lonely existence in "How Much Do You Love Me?"

When François (Bernard Campan, "The Man of My Life") wins 4.5 million Euro he goes to a hooker bar where he meets the stunningly beautiful Daniela (Monica Bellucci, "The Passion of the Christ," "The Brothers Grimm") and asks her to live with him for 100K a month in writer/director Bertrand Blier's ("Beau Pere," "Too Beautiful for You") "How Much Do You Love Me?" Blier's film has been largely panned, so approaching it with lowered expectations helps yield some satisfaction. François's doctor professes concern for his patient's weak heart while he himself covets Daniela, who seems to actually have real affection for her client. Things are thrown for a loop when Daniela's boyfriend/pimp, Charly (Gérard Depardieu, nowhere near as interesting as in "The Singer" or "La Vie en Rose"), reenters the scene and then there is the surprise third act events which are hard to see coming. "How Much Do You Love Me?" may be preposterous, but it is not commonplace and for that it gets a mild recommendation.

This is a lightly wrought French farce that is, essentially, a beauty and the beast story. Homely Francois, with his lotto winnings, finally has a chance to find happiness, or something like it. He offers Daniela, whose going rate is 150 Euros for the night, 100000 Euros a month to be his live-in squeeze, providing cooking, cleaning and performing wifely duties for her benefactor. She agrees, but only if, when he touches her, it is 'with gentle hands.' Francois enters a time of bliss for the first time in his life. However, Francois's paradise has some problems. One is the constant badgering by his doctor and best friend, Andre (Jean-Pierre Darroussin), who fears for his friend's life - 'a guy with a weak heart shouldn't be with a nuclear bomb' he admonishes. The other is the arrival of Daniela's pimp and 'husband,' Charly (Gerard Depardieu), who is none to happy with an arrangement that costs him revenue. Writer/director Bertrand Blier comes up with a mildly amusing love story - think the schlemiel and the hooker - that is occasionally shrill and forced. This four-hander struggles to keep its focus, mainly due to the lack of sympathy developed for Francois. Bellucci gives a one-note perf as Daniela and she, too, does not build your sympathy. It is telling when a supporting character, in this case Francois's loyal friend and physician, Andre, nicely played by Darroussin, garners far more empathy than the film's stars. "How Much Do You Love Me?" is one of the last films shown in Boston's Museum of Fine Arts 12th Annual French Film Festival and, alas, ending that terrific fest with a whimper, not a roar.