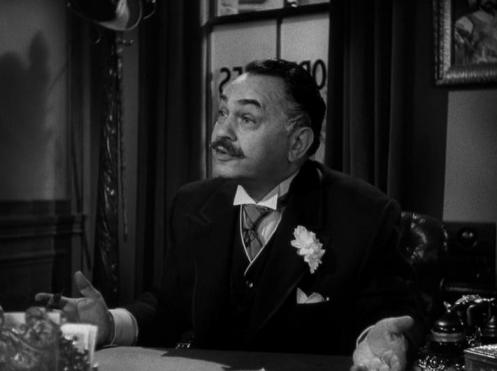 The first thing Max (Richard Conte, "A Walk in the Sun") does when he gets out of jail is confront his three brothers Joe (Luther Adler, "Absence of Malice"), Pietro (Paul Valentine, "Out of the Past," "Against All Odds") and Tony (Efrem Zimbalist Jr., TV's 'The F.B.I.,' '77 Sunset Strip') at Monetti Trust and Loan about getting his seven years back. Max was the only son to stand by their father, Gino (Edward G. Robinson), when his bank was challenged by the U.S. Government, but by that time Gino had already turned his home into a "House of Strangers."

This surprising dysfunctional family noir from Joseph L. Mankiewicz foreshadows "The Godfather" in many ways. Edward G. Robinson is an Italian immigrant who has risen through the ranks of the lower East Side where Gino's Bank is financial refuge to those with no collateral. Gino is visited by people of the neighborhood all asking for favors as if he were Don, and like Don Corleone, while Gino looks out for women and children, his 'favors' come with a price. Gino also manipulates his sons, keeping them under his thumb with the promise of the bank as their inheritance. In the meantime, he keeps eldest, Joe, in check as a teller ('Get back to your cage!') despite the promise of a raise when Joe married (to WASPy Elaine (Diana 'mother of Michael' Douglas) who expected a moneyed lifestyle). Pietro, an amateur boxer, is ordered about, called a 'dumbhead' and stripped of his Monetti robe when he loses the bout dad's finally come to see. Tony is a flash guy who tries to keep the peace but without much conviction. Max, however, is on his own as a lawyer, engaged to good Italian girl Maria (Debra Paget, "Love Me Tender") when he falls under the spell of client Irene Bennett (Susan Hayward). The film, which was adapted from a novel by Philip Yordan ("Johnny Guitar") with uncredited work from word man Mankiewicz, is notable for its shades of gray. Gino sees himself as a benefactor and, at times, is even portrayed that way, but gradually we learn how his usurous loans indenture many of his customers. He tries to instill a work ethic in his sons, a good thing, but belittles them in public and private, using his power to control. Max, also, isn't just the story's hero as can be seen most obviously through his romantic attachments. But his ability to stand on his own gives him a unique perspective. The film has some purple prose in its early goings, but Mankiewicz had a sophisticated ear for dialogue and it shows here. The film was shot by "All About Eve's" Milton R. Krasner in noir style, even without the genre's black, rain-drenched streets. The ensemble, including Esther Minciotti ("Marty") as the family's shattered matriarch, all hit their pitch in fine form. Mankiewicz has attained a family portrait made up of distinct individuals. He also stages a doozy of a scene in a restaurant whose patrons are a study in character traits and whose owner/waiter glides about as if on roller skates (Jack Chefe in a standout supporting role). "House of Strangers" was clearly influential (star Conte even went on to play "The Godfather's" Don Barzini), but unfortunately somewhat overshadowed by Mankiewicz's own "A Letter to Three Wives," for which he won writing and directing Oscars that same year (he won the same two again for his masterpiece, "All About Eve"). All these years later, "House of Strangers" may very well be the more interesting film.

In “House of Strangers (1949),” immigrant martinet Gino Monetti has built up a successful banking business by lending money to his neighbors at usurious rates. He has kept his sons, Joe (Luther Adler), Pietro (Paul Valentine) and Tony (Efrem Zimbalist Jr.), under his controlling thumb for years and only Max (Richard Conte) maintains his father’s respect by leaving home and earning his law degree. This family drama is reminiscent of Shakespeare’s “King Lear” with sons instead of daughters. This tale of greed and power is melodrama but, with terrific actors and a hard-bitten script, it is a cut above what it could have been.