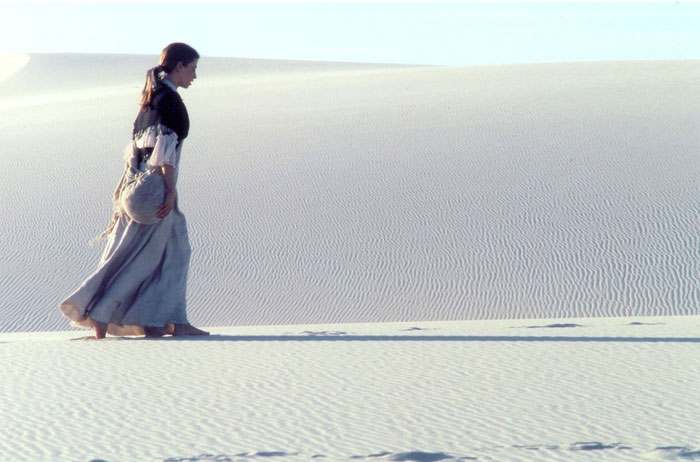 In 1910, Áurea (Fernanda Torres, "Four Days in September") and her mother Donna Maria (Fernanda Montenegro, "The Other Side of the Street") follow Áurea's husband Vasco (Ruy Guerra, "Fable of the Beautiful Pigeon Fancier") on a harsh two week trek to the land he has been deeded in Maranhão near the northwest coast of Brazil. Pregnant, Áurea is horrified at the idea of raising a child in this remote, bleak area but Vasco will not return to the capital even when their servants desert them. When Vasco dies in a freak accident that Áurea and Donna Maria do little to save him from, they are left to weather decades in a "House of Sand." Talk about two women of the dunes! I admired director Andrucha Waddington's 2000 Best Foreign Language entry "Me You Them," but it didn't sweep me up as much as the startling "House of Sand." This is a film about existing outside of the world, encased in a bubble of time and it is strikingly beautiful (cinematography by Ricardo Della Rosa) and brilliantly acted by the real life mother and daughter team of Montenegro and Torres who play mother and daughter through two and three generations. "House of Sand" was the 2006 Sundance Film Festival's World Cinema Jury Prize winner and if it is eligible, should be in the race for 2006's Foreign Language Film Oscar. From the time she arrives in Maranhão, Áurea expends her energies trying to leave it, but it is Donna Maria who finds a link to the outside. Lone fisherman Massu (1910-1919, Seu Jorge, "City of God," "The Life Aquatic with Steve Zissou"), a black man of the former slaves who escaped to the area, has never seen anyone come or go via the raging ocean at their door, but his father has a store that is supplied by Mr. Chico (Emiliano Queiroz, "Madame Satã") who intermittently passes through the area. At first nonplussed by the man's age and limited resources (no cart!), Áurea nonetheless makes a deal with Mr. Chico which takes so many years to come to fruition that she's amassed a herd of goats to barter and her daughter is a girl of nine. When Massu, who clearly does not want Áurea to leave him, comes back to report that Chico died before reaching his destination, Áurea insists on seeing for herself. After a two day journey through the dunes, she happens not upon Chico, but a solider Luiz (1919, Enrique Díaz, "Carandirú"), who has guided a group of scientists to photograph the phenomena in the skies (photographs appear often in this film, accentuating time encapsulated). Áurea cries at the first sound of music in a decade, the thing she has missed the most, and marvels at tales of unknown wars and a thing called an airplane. Luiz takes the strange woman as his lover, then promises to take her back with her mother and daughter Maria (1919, Camilla Facundes), but by the time Áurea returns she is greeted by the tragedy that has threatened her for years. Finally making a home with Massu, Áurea and her daughter's relationship will diverge wildly from the one she had with her mother and yet the two generations' experiences will dovetail in surprising ways. Fernanda Torres, who takes on the role of Maria as an adult, is not a pretty woman, but one with an arresting, chiseled face the camera loves and she pulls you into Áurea's story with fierceness and never lets you go. When Montenegro takes over for the older Áurea, Torres doesn't miss a beat slipping into the skin of wild child Maria, a woman who has known nothing of the outside world except for the things she gets from the visiting soldiers she sleeps with. Torres is a force and her dual performances should put her on the short list for a Best Actress nomination comes year's end. Madre Montenegro plays both Donna Maria and, later, Áurea with a more passive strength that suits Maria's generation and Áurea's eventual acceptance. After his roles in "City of God" and the Portuguese Bowie singer of "Life Aquatic," Seu Jorge is proving quite the screen presence - he's magnetic keeping Áurea by his side before she even realizes it is a place she'd like to be. Unfortunately, when Luiz Melodia takes over the character in 1942, he seems beaten down, a useless old man dependent on a woman, casting Massu's role in a pathetic light that it does not deserve. Conversely, 1942's Luiz, Stênio Garcia ("Me You Them") is richer and more vital than his 1919 counterpart. In 2000's "Me You Them," Waddington told the tale of a woman in a remote part of Brazil keeping peace among three lovers who fulfilled three different needs. She was a feminist in a male dominated society. In the glorious "House of Sand," three women dominate a landscape which men either coexist with or only visit. Yet despite their strength, only one achieves the long yearned for return to the outside world. Áurea's dreams are engulfed in sand.