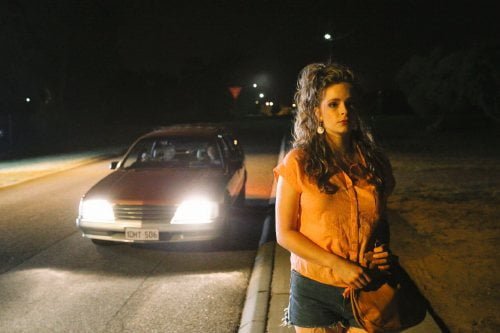 It's Christmas time, 1987 in Perth, Australia. Vicki Maloney (Ashleigh Cummings) just gotten a puppy from her dad, Trevor (Damian de Montemas, "Somersault"), but she's not happy about spending time with her mom, Maggie (Susie Porter, "Little Fish"), resenting her for having broken up their family. Sneaking out of her room one night to head to a party, a couple pull up asking if she'd like to buy some weed. John (Stephen Curry, "The Castle") and Evelyn White (Emma Booth, "Gods of Egypt") seem friendly and ordinary, but they're anything but in "Hounds of Love."

Who knew a movie about a serial killing couple could also turn out to be a Mother's Day movie? Gunpowder and Sky has chosen the holiday weekend for a canny bit of alternate VOD programming. Writer/director Ben Young's feature debut is a beautifully shot, superbly acted psychological thriller with more on its mind than its subject matter would suggest. Young opens with a voyeuristically creepy slo-mo shot of teenaged girls playing volleyball on a school court, one of whom is picked up by a passing car as she walks alone down the street following the game. This is followed by an extreme closeup of two lovers, two sets of blue eyes, noses sprinkled with freckles, seemingly very much in love. We then meet another couple, Vicki and her boyfriend Jason (Harrison Gilbertson, "Need for Speed") goofing around after school. There's a shot of a boarded up window, then one of a box on the floor inside, its contents chilling in their suggestion. A missing poster of a teenaged girl is posted on a pole outside. When the couple who've stopped Vicki 'remember' they've left their weed at their home, Vicki is ready to move on, but John and Evie are so open and inviting, she relents. Vicki's startled by a barking dog, but Evie introduces her to Lucy, calling her a big old sweetie gifted to her by her husband. When John gets a phone call, Evie convinces her to have a quick drink inside, a pre-party lift. It is not until Vicki tries to get up and leave that her situation dawns on her. Young sets his stage with great precision, in bright, cheery sunshine and breezy evening camaraderie, cutaways from the action his tension building blocks. Curry and Booth create the type of easy-going charm of a couple you'd meet on vacation and hang with, Cummings just wary enough to not be naive. Vicki's a smart girl nonetheless taken in by master manipulators, and as she will observe, that manipulation doesn't end with their victims. She will use what she observes between the Whites for a psychological edge, appealing to Evie's self doubts when the women are left alone. Meanwhile an increasingly worried Maggie is being assured by the police that her daughter is a runaway, just like the others who've gone missing from their pedestrian suburb (Young also weaves this presumption into the Whites' MO, a stepping stone to his emotional climax). Cummings, who won the Venice Film Festival's debut actress award, is on constant alert once she finds herself shackled, always watching, always thinking. But it is Booth, who won the Brussels International Film Festival's Best Actress award, who is the heart of the film. She's a fresh faced beauty, her happy housewife routine only broken by the precision with which she lines up John's toast on his plate and the picture of her with a toddler tacked on the refrigerator door. Booth evokes sympathy, clearing torn between a maternal, compassionate nature and the demands of John's sick desires, her proof of her love for him. Curry, whose wavy salt and pepper hair gives him the air of a dapper British gent of times past, paints a more black and white picture, affectionate husband one moment, dangerous psychopath the next (his power play with Evie after Vicki is restrained is playfully terrifying). Young uses stillness to great effect, his camera mostly static (cinematography by Michael McDermott) as it peers down the hallway to and from the Whites' kitchen. Their are episodes of frenzied action (Vicki's one attempt escape is almost unbearable), but Young wisely keeps most of his violence offscreen. An eclectic soundtrack, from "Carol of the Bells" to Cat Stevens's "Lady D’Arbanville,” add irony and melancholy to Young's tonal balance. (The film's title only references the Kate Bush song, instead pointing to substitutes for patriarchal love.) "Hounds of Love" is an exploration of domestic abuse that is at once relatable and extreme. Using the trappings of the serial killer genre, Young explores the strength of maternal bonds and the will necessary to break free of male dominance. Grade: