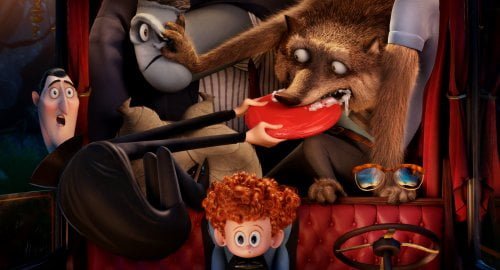 Drac's (voice of Adam Sandler) just thrilled to be a vampa when his daughter Mavis (voice of Selena Gomez) and human husband Jonathan (voice of Andy Samberg) have a little hybrid. But when little red-headed Dennis (voice of Asher Blinkoff) hasn't 'fanged' by the age of five, Drac has to take drastic action to keep Mavis from moving her family to California in "Hotel Transylvania 2."

From "Father of the Bride" to "Meet the Parents" it's been a long standing formula that if the first film features a father giving away his daughter, the sequel will be about a new grandad. And so it goes for "Hotel Transylvania," the rare sequel that improves upon the original. Although director Genndy Tartakovsky showed a great knack for the visual gag in "Hotel Transylvania," the script's dialogue was rarely funny. The sequel, by star Adam Sandler and returning writer Robert Smigel, sinks its teeth into overprotective parenting, families joined by marriage (Jonathan's are voiced by Megan Mullally and Nick Offerman) and tradition vs. progress with Sandler in his one of his most lovable roles leading up his pally pack of ghouls. Soon after the opening credit wedding sequence, which finds Mike and Linda introduced to their strange new daughter-in-law's family and friends, Mavis is following in dad's footsteps, baby proofing the entire hotel while Jonathan is acting as liaison to the newly allowed human guests. Drac's come a long way, but he's appalled by Dennis-o-vitch's 'Cakey Monster' videos. They lack bite, just like his grandson (clearly Jonathan's progeny, Dennis looks ripped out of Pixar's "Brave"). In cahoots with his son-in-law, Drac sends the couple off on vacation, agreeing to Mavis's lengthy child care list but really intending to put the kid through monster training boot camp. But his buddies are getting soft, Frank (voice of Kevin James) taking selfies with joggers, Wayne (voice of Steve Buscemi) distracted from taking down a deer by a Frisbee and Murray (voice of Keegan-Michael Key) becoming generally unraveled. Invisible Griffin (voice of David Spade) is all wrapped in a girlfriend his friends don't think is really there. So, it's off to Camp Winnipacaca where Drac earned his fangs only to discover the past 1,000 years has brought changes there as well, ones which the Count finds wimpy (he's really disgruntled that old campfire songs like 'Michael row your corpse ashore' and 'Old McWerewolf had an axe' have been replaced by 'Vampires are friends forever'). When he tries tough love, his gamble goes viral, bringing his furious daughter back home. But someone else's coffin has been rattled. Drac's 'old school' dad Vlad (voice of Mel Brooks) is coming to meet his grandson and he and his bat Bela (voice of Rob Riggle) have only one use for humans. The CGI animation is lively and clever, Drac's movement alone bringing a smile. Blobby's propensity for engulfing his environs offers constantly changing sight gags. The short California side trip allows Mavis to instantly own BMX and delight in the 48 flavors of convenience store slurpees. The vocal cast is having a ball, Sandler really owning this role, Buscemi's put upon werewolf dad screamingly funny. Mel Brooks is genius casting for Vlad, but he isn't given a lot to work with, the biggest pleasure just in hearing that voice. As is often the case with animations, at least those not from Disney, Pixar or Studio Ghibli, the film's climax is loud and chaotic, going on too long with little in the way of wit. But "Hotel Transylvania 2" is funnier the second time around and it has heart (a real one, actually, ripped from a monster's chest). Grade: