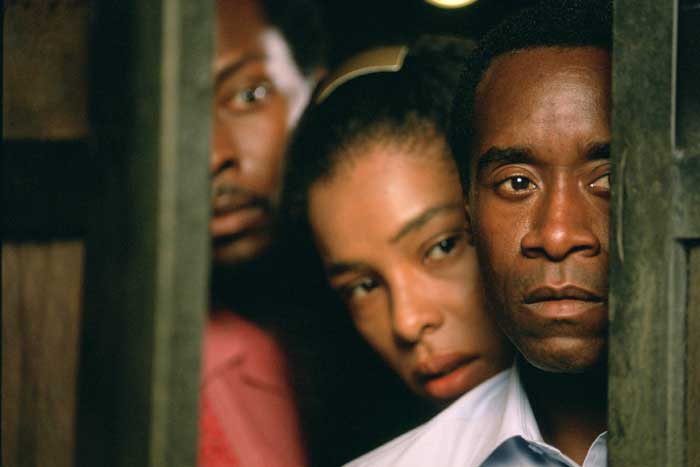 Paul Rusesabagina (Don Cheadle) is the black assistant manager in a Belgian-owned luxury hotel in Kigali, Rwanda, Africa. It is 1994 and civil war has broken out outside the walls of the four-star lodging and the now-in-power Hutu tribe is bent on getting revenge on the previously powerful Tutsis. Paul, a Hutu but non-political, only wants to save his family from the coming slaughter, but soon realizes there is more at stake – the lives of over one thousand people, Tutsi and Hutu alike, who come to find sanctuary at “Hotel Rwanda.”

Reading the film’s synopsis, I fully expected a rehash of “Schindler’s List,” but with an African, instead of Eastern European, backdrop. I could not have been more wrong and satisfyingly surprised. Director Terry George makes an incredibly deft splash with his first theatrical feature, co-written with Keir Pearson, with his based-on-real-events story that reveals the heart of a true hero.

Paul, due to his influential position at the four-star hotel that is regarded as a safe haven amid the chaos of Rwanda, has amassed a cache of favors from influential people both in and out of the country. His first plan is to save his wife, Tatiana (Sophie Okonedo), and their children but it soon becomes obvious that his sizable extended family is in danger, too. The white, foreign workers and managers are abandoning Rwanda into the hands of the murderous Hutu with only a token United Nations force remaining, led by Colonel Oliver (Nick Nolte), but hamstrung by a no-fire policy.

The abandonment of Rwanda by the western powers leaves the door open for rampant abuse and murder by the Hutus and more and more refugees flock to Paul’s hotel, where he is placed in charge by the Belgian owners. Paul utilizes the support and political clout of the company’s chairman (played by Jean Reno) to protect his steadily growing number of wards. But, for every good deed and success, the hotel manager must face increasing obstacles that could mean the wholesale slaughter of his refugee residents. He calls in his fast-diminishing markers to feed and protect the still-growing numbers.

Hotel Rwanda” is the frequently harrowing story of a man trying to make sense out of chaos. Helmer George mixes, sure-handedly, the personal hopes and fears of Paul and his family as they struggle to survive amid the carnage being inflicted on the Tutsis and any of their Hutu supporters. Paul’s story is set within the horrific events of the civil war. In one of the film’s many potent scenes, Paul and one of his employees set off into the night to secure supplies. The Hutu black-marketeer advises Paul to take a particular route home, one that he assure the hotelier is clear. It is anything but clear and the horror they encounter is shocking.

Don Cheadle has finally been given the lead in a significant and important film. I have been a fan of the actor since I first noted him with Denzel Washington in “Devil in a Blue Dress” and have been impressed by every performance since. The actor is commanding in the role of Paul Rusesabagina as he must juggle his influence and stockpile of favors and bribes to maintain a tenuous balances as he tries to work both ends against the middle. His bravery in the face of brutal violence is an impressive depiction.

Sophie Okonedo, as Paul’s wife Tatiana, gives a strong perf in a tough role. She is supportive of her husband and will stand by her man. But, she is also concerned for her family and their survival and this complexity of character is well balanced by the actress, to emotionally powerful results. Nick Nolte, as the UN peacekeeper, does a solid job depicting a man who wants to do the right thing in the war torn country but whose hands are tied by forces and influences outside Rwanda.

Hotel Rwanda” has a verisimilitude that puts you in its time and place. It grabs you on both a personal level, as you watch Paul try to protect his family to near tragic ends, and on the larger social scale that depicts the savage murders by machete that may have numbered a million victims given “the chop” in a scant three-month period. This is a film that rivals Schindler’s List,” “The Killing Fields,” and “State of Siege” in its powerful story, dynamic acting (Cheadle deserves a Best Actor nom, among other kudos for the film), and careful crafting. More than once it brought tears to my eyes with its raw emotion.