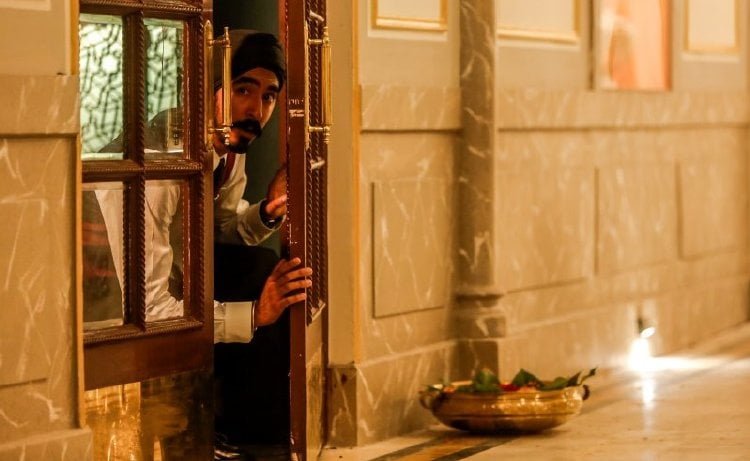 A young Sikh father delivers his little girl to her expecting mother as he rushes to work, his shoe slipping from his bag unnoticed. He doesn’t pass inspection under exacting executive chef Hemant Oberoi (“The Big Sick’s” Anupam Kher), but waiter Arjun (Dev Patel) is so in need of his shift, Oberoi lets him wear a pair of his (too small) shoes. In a matter of hours, both will be concerned with far more pressing matters than food and service when 10 jihadists from Pakistan rain terror over the entire city of “Hotel Mumbai.”

The timing of this Bleecker Street release couldn’t be worse. Considering the recent mosque massacres in New Zealand, there are bound to be those who will use this retelling of the November 2008 siege of Mumbai and the Taj Mahal Palace Hotel as a bludgeon against the entire Muslim faith. That said, cowriter (with John Collee)/director Anthony Maras has paid homage to the hotel staff whose bravery in unbelievably horrific conditions ensured the safety of most of their guests. Of over 500 people in the hotel during those three days including guests, staff and those who came to the hotel for shelter after the shooting and bombings began, only 32 lost their lives. Half of them were staff who could have escaped. Maras also addresses unwarranted fears, a Taj guest, Lady Wynn (Carmen Duncan), asking for Arjun to be removed from the safe space where they have gathered because his turban makes her uncomfortable (Patel is wonderful in this scene, using it as an opportunity to explain Arjun’s faith and the reason for his turban, winning the woman, who’d been denounced by another guest, over). The young jihadists are not interchangeable ‘bad guys,’ but fleshed out characters whose radicalization is teased out during communications with their mastermind, The Bull. In one particularly tense scene, Imran (Amandeep Singh) realizes the subversion of his faith. It is quite extraordinary to consider that this is Maras’s first feature. His huge undertaking encompasses multiple story threads across multiple locations. With the assistance of production designer Steven Jones-Evans, he gives us a clear spatial understanding of the vast luxury hotel. The violence is sudden and shocking, yet Maras guts us while keeping most of it off screen, frequently cutting to the perpetrator rather than the victim. On November 26, 2008, an inflatable motors to the shore. Ten young men disembark and get into three cabs, each headed to a different destination. Two get out at the CTS train station (the same station where ‘Jai Ho’ was performed in “Slumdog Millionaire”). They head into a public restroom, assemble automatic weapons and step back out into the crowd, the restroom’s attendant oblivious until the shooting starts. At the Taj, the hotel’s extraordinary service is on display as VIP guest Zahra (Nazanin Boniadi) arrives with her American architect husband David (Armie Hammer), their infant son and nanny Sally (Tilda Cobham-Hervey).Butler Jamon (Alex Pinder) has already ensured that the bath in their suite is at the ready, down to the very particular temperature preferred by its guest. A dinner reservation has been made and the couple head to the dining room. Zahra is appalled by the cell phone conversation of Russian billionaire Vasili (Jason Isaacs) at a neighboring table as the man discusses the physical attributes of women he is ordering to be sent to his room. Our opinion of Vasili will become more complex. In a far less ostentatious restaurant, backpackers Bree (Natasha Liu Bordizzo) and Eddie (Angus McLaren) are settling their bill in preparation to head to the Taj. Their waiter drops between them, shot in the head. Bree and Eddie are among those who run to the Taj for shelter, where exterior events are just beginning to become known. Outside a local police officer (Nagesh Bhonsle) instructs the five nervous men under his command that they were going in, Mumbai, India’s financial and entertainment capital, having no tactical units of its own, awaiting assistance from New Delhi four hours away. While any movie about such a horrific event is subject to criticism of exploitation, Maras has given us what appears to be a very even-handed approach, one which allows us to understand what it must have been like to endure this horror as well as one which honors truly heroic actions. Many of the characters are composites, Oberoi being the most notable real person (as if his actions during this siege were not notable enough, the executive chef had one of the hotel’s restaurants operational again just three weeks after the attacks). Even so, Maras has based these composites on real people, giving us a broad cross section of characters composed of more than one defining trait. Dev Patel, who came up with the idea of making his waiter a Sikh, is maturing into a very fine actor, his Arjun the epitome of the best of humanity without ever coming across as saintly. “Hotel Mumbai” is a very well crafted film but be forewarned as it is also a difficult and draining experience. Grade:

Between 26 and 29 November 2008, 10 Pakistani terrorists, heavily armed with assault weapons and explosives, staged a coordinated attack on 12 sites across Mumbai, India. One of those targets, the Taj Mahal Palace Hotel, was laid siege to by the killers, threatening hundreds of guests and staff members. The battle to stop the terror in that esteemed edifice is told, from both sides, in “Hotel Mumbai.” First-time feature writer-director-producer-editor Anthony Maras creates a well-crafted story of the events that gripped the city of Mumbai for three days. The film begins with the terrorists, in small inflated boats, landing at the port and dispersing, heading for their assigned targets. They are being commanded, via cell phone, by their fanatic leader in Pakistan called “The Bull.” Across the crowded city, Arjun (Dev Patel) hustles to get ready for his job as a porter at the prestigious Taj Hotel and drops off his toddler daughter with his pregnant, working wife. He arrives at work, late, as the day begins for the staff and guest, and almost loses his job. The rooms are meticulously prepared for the pampered guests as the maitre d’hôtel greets them on their arrival. Meanwhile, within a 30 minute period, the city is wracked by explosions and devastating gunfire as the terrorists put their horrific plan into action, indiscriminately killing and wounding hundreds. Then, they converge, in the citywide chaos, on the Taj Mahal Palace and begin slaughtering all the infidels they come across. This gripping tale of survival and sacrifice is a true ensemble effort by its large cast, with Dev Patel first among equals. Arjun’s story thread – and this is a tapestry of many story threads – shows his, and by extension the rest of the staff’s, dedication to the hotel and its clientele. The bravery of the staff members is, as intended, quite moving. The other main thread, from the terrorists’ POV, shows their fanatical devotion to their leader and willingness to carry out the carnage for Allah and their families, who are promised payment for their sons’ sacrifices. The filmmakers do not extol their deeds, at all, but it gives a glimmer into the terrorist mind and reason. There are, as I said, many stories going on, from Armee Hammer and Nazanin Boniadi as an American-Indian couple with a new baby and nanny in tow to Jason Isaac as a Russian oligarch in town to do business. Anupam Kher, as the hotel’s chief chef, shines as the man who takes charge to protect all in his care against the slaughter going on just outside their barricade. These and other stories are given the attention needed and the viewer sympathizes with the survivors and the victims. “Hotel Mumbai” is a well-told docudrama that does a fine job of showing us the horror of the fanatical attack and the bravery and courage of those who fought back.