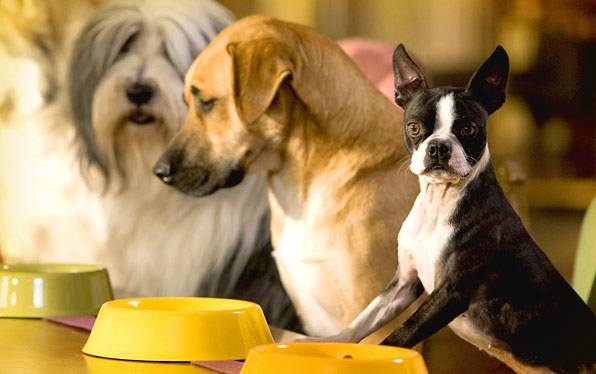 16-year old Andi (Emma Roberts) and her brother, 11-year old Bruce (Jake T. Austin), have bounced from one foster home to another since the death of their parents some years before. To cope with their vagabond life, they adopted a little stray mutt and named him Friday. He has been their best friend for three years and the kids successfully hid their canine pal from their many foster parents. One day, Friday runs off on a look around town and is caught by Animal Control. Now a marked pooch, Andi and Bruce must find a home for their little buddy when he evades arrest again. They find his refuge in the “Hotel for Dogs.”

Sixteen year-old Andi (Emma Roberts, "Nancy Drew") and her twelve year-old brother Bruce (Jake T. Austin, "The Perfect Game," TV's "The Wizards of Waverly Place") have been trying to stay together through a series of foster homes since their parents died. Now living with the despicable Scudders, they are also trying, and failing, to keep their dog, Friday, hidden and fed. One day downtown, they follow Friday into a condemned building where they discover a Bull Mastiff and Boston Terrier making their home. After Andi gets pet shop employee Dave's (Johnny Simmons, "Evan Almighty," "The Spirit") buy-in to provide food - and three more homeless dogs - Andi and Bruce are inspired to turn the abandoned space into a "Hotel for Dogs." Adapted from Lois Duncan's book, "Hotel for Dogs" certainly has its heart in the right place, but aside from its talented canine cast (none of whom speak by the way) and its Pollyanna Purebred leads, this is a pretty generic exercise. "Beverly Hills Chihuahua" may not be comic gold, but it at least tried to throw in some entertainment for the adults in the crowd. "Hotel for Dogs" is pablum made more palatable by its animal rights message. Friday, a Jack Russell terrier, is a bottomless pit whom Andi and Bruce attempt to feed by scamming local pawn shop dealers. At home, Lois (Lisa Kudrow, TV's "Friends," HBO's "The Comeback") and Carl Scudder (Kevin Dillon, HBO's "Entourage") are aging, untalented rockers who keep the pantry locked and presumably keep the kids for the state funding that comes along with them. Their social worker, Bernie (Don Cheadle, "Ocean's Thirteen," "Traitor"), tries to keep them out of trouble and together. When Andi enters Paws pet store with too little money, she attracts the interest of good looking Dave and makes up a story that lands her with Shep, a herding obsessed Border Collie, Cooper, an English Bulldog that eats everything in its path and Romeo, a funny looking Chinese Crested. Paws employee Heather (Kyla Pratt, "Doctor Dolittle," "Doctor Dolittle 2 & 3"), who has a crush on Dave, follows the store van, but when she sees what Andi and Bruce have been up to, offers to help. Mark (Troy Gentile, "Nacho Libre," "Drillbit Taylor"), a strange neighborhood kid, completes the hotel foursome. As Bruce's knack for invention is put to use building automated doggie bathrooms, feeding stations, fetch machines and even mechanical sheep to amuse Shep (they remind one of a Wallace and Gromit adventure). The building was indeed once the Hotel Francis Duke (HFD - Hotel for Dogs), so Bruce has a lot to work with. He even succeeds in locating a fancy dress when Andi's asked to a pre-school year party by Dave. But as the kids rescue dogs and clear out the local pound, neighbors begin to complain about the noise, and before long, Andi and Bruce and their four-legged (three-legged in the case of Chelsea) friends are busted once again. Emma Roberts is a natural for this kind of role and she shows sisterly protectiveness towards Austin and a sweet chemistry in her chaste romance with Simmons, but the adults are too black and white, too utterly good, as is the case with Cheadle's character and his school teacher wife Carol (Robinne Lee, "Hitch," "Seven Pounds"), or too cartoonishly bad like Kudrow and Dillon and the dastardly dog catchers Jake (Ajay Naidu, "The Honeymooners," "Righteous Kill") and Max (Eric Edelstein, "The Hills Have Eyes II"). Even a guy on the street (Jeremy Howard, "Accepted," "Sydney White"), used as a bookending dog hot dog steal trick, is a villainous buffoon. Pratt drops her crush the moment Roberts comes onto the scene and Gentile is MIA for a large hunk of screen time with no explanation. Production design merely serves the story with no attempt at logic. The Scudders have a decent, if bare bones apartment and custody of two kids with no apparent source of income. The supposedly condemned hotel not only hides no dangers but is blessed with running water and electricity. "Hotel for Dogs" only really works as a parade of purebred species, trained to project each character's idiosyncrasy yet synchronize as part of a group. Besides the lovable mutts, there is little for anyone over the age of ten at "Hotel for Dogs."

Based on the Lois Duncan book, first time feature director Thor Freudenthal brings us a politically correct kids' film that is amiable enough for their parents, too. With the current spate of doggie movie like “Beverly Hills Chihuahua” and “Marley & Me” out there, another one is expected. And, it comes in the telling of “Hotel for Dogs.” We know (though the kids watching won’t notice) that something magical is happening just as the long arm of Animal Control (nasty but in a bureaucratic way) is about to snatch Friday off the street. An old, abandoned hotel’s marquis lights turn on, like a beacon to attract Friday. He slinks into a hole in the building, followed quickly by Andi and Bruce. Once inside, they discover they are not alone. Living in the vacant building are two other dogs, dubbed by Bruce as Lenny (the big dog) and Georgia (a diminutive Boston terrier), and Friday finds a home, for a while, at least. The siblings decide that, if they can take care of three dogs without adult help, they can take care of more strays. Three becomes nine and then 15 until the stray population in the city all find a home at the old hotel. The young assistant manager at a local pet store chain, Dave (Johnny Simmons), who has taken a shine toward pretty Andi, volunteers to help them out. Then, one of his co-workers, Heather (Kyla Pratt), joins the club. Thus reinforced, and with inventor Bruce’s propensity for building Rube Goldberg machines, everything seems secure. Until, that is, the neighbors complain about the barking din coming from the supposedly empty building. The human actors take a back seat to the canine stars and their amusing antics. The kids are OK but the adult thesps are left to deal with two-dimensional characters. Don Cheadle, as Andi and Bruce’s social worker, and Kevin Dylan and Lisa Kudrow as their mean foster parents do not get to do much. Other adults, like the nasty animal control officers, don’t even have two dimensions to work with. While “Hotel for Dogs” deals with the social issue of stray and abandoned animals, it doesn’t raise a finger over the other issue of animal neutering. It is something that the kids will not notice, but it is a glaring omission for me, especially considering the otherwise politically correct story. “Hotel for Dogs” is definitely a kiddy flick. The bevy of real dogs all have their own, individual personalities and the little ones will love Friday, Lenny, Georgia, Romeo, Juliet, shoe-chewing Cooper and the rest. The wacky inventions that Bruce comes up with will also keep the kids amused. Adults will see the huge plot holes that pepper “Hotel for Dogs” but the filmmakers know that the real audience, the youngsters, won’t care.