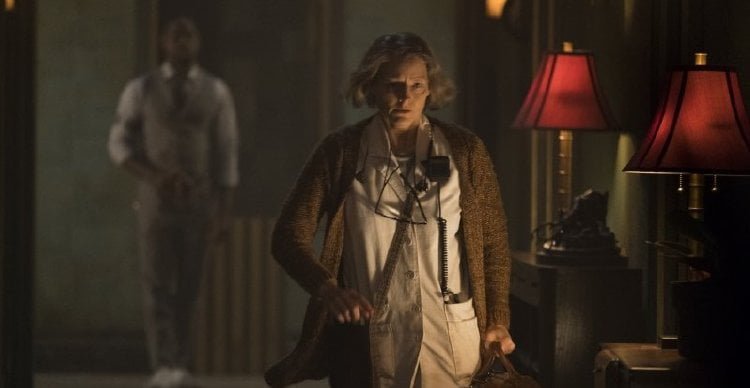 In the not-too-distant future, Los Angeles is being torn apart by riots and crime during a catastrophic water crisis. One place, though, is a sanctuary, run by the Nurse (Jody Foster), for those criminal elements that need emergency care, and can pay for it. It is called “Hotel Artemis.”

During the third night of L.A. rioting over the lack of now privatized water, four men wearing skull masks end up in a shoot-out with deployed police after a failed bank heist. Sherman (Sterling K. Brown) finds himself in a familiar place, having to take care of his now badly wounded younger brother Lev ('Atlanta's' Brian Tyree Henry) in the midst of violent chaos. Thankfully he is a member of a secret clinic for criminals, "Hotel Artemis." Before seeing writer/director Drew Pearce's (writer "Iron Man 3") feature directorial debut, I thought it sounded an awful lot like "John Wick" with its secret hotel for criminals. And in many ways, including the all important house rules, it is. But primarily, this is an emotional character study of its central character set within a genre B movie and Jodie Foster really delivers in her best performance in years. "Hotel Artemis" can also be seen as an allegory for our current political situation where breaking of the rules results in systematic collapse. Only members who can identify themselves via implanted wrist chips are allowed into "Hotel Artemis," where they become known by the names of the hotel's former penthouse suites. Sherman and Lev become Waikiki and Honolulu, their now shabby, art-deco accommodation featuring a tourist mural and state-of-the-art medical equipment. The Nurse (Foster), who has run the facility for 22 years and not been outside of it in several, tells orderly Everest (Dave Bautista), who has the endearing habit of pointing to his name tag and informing that he is a health care professional, to take care of Buke (Kenneth Choi), a thief shot in the neck who's tried to enter with legitimate clients. The gray haired, no nonsense nurse attends to Lev, removing bullets and hooking him to a 3D printer which will recreate his damaged liver. As Lev goes under, she also points out the needle mark between his fingers, Sherman distressed to learn his brother is still using. As The Nurse frets about her unusually busy evening, having already checked in Nice (Sofia Boutella), an assassin who shot herself to get in, and Acapulco (Charlie Day), an arms dealer, she gets a disturbing phone call demanding that a room be held. As that is against the rules, she repeatedly hangs up - until she learns the caller is Crosby Franklin (Zachary Quinto), the son of her boss, the Wolf King. Things really heat up when she spies a shot cop (Jenny Slate) on a security camera pleading to be let in. This, for very obvious reasons, is also against the rules (which also forbid fighting with or killing other guests), so Everest is astonished when she decides to treat her. As her agoraphobia barely allows her to reach the woman, policewoman Morgan must be brought inside. While Foster has already painted an intriguing portrait, it is the identify of this cop and the arrival of Orian Franklin (Jeff Goldblum) that brings her past into focus. Pearce has given us odd flashbacks of a tow-headed boy beneath a pier on a beach, often followed by The Nurse self-medicating from a hidden bottle. Foster's Mrs. Thomas, as Morgan calls her, is a compassionate soul within a brittle and battered shell and the actress's stripping away of her character's protective artifice is moving and unexpected within Pearce's genre trappings. While the rest of the film is entertaining, it's also mostly irrelevant, there as the underpinnings to this character study. The rest of the oddly assembled cast is hit and miss. Day brings his comedic background to his increasingly paranoid dealer, one who learns a big lesson when hitting on 'Nice.' Boutella is a big plus, costumer Lisa Lovaas garbing her in sheepskin collared jacket and slit burgundy gown that doesn't impede the movements of her very physical performance as she trips the plot mechanism which brings the film to its climax. Bautista's show of adoring loyalty is great support for Foster's character definition while Brown steps in as her moral 'caring for people' parallel in a role that doesn't show us anything new. Goldblum adds tart amusement while leaving us wondering why Quinto took the thankless role as his dim, violent son. The film has a grungy, set-bound aesthetic, but the hotel itself is a worn out bit of nostalgia for a downtown L.A. largely disappeared. The film's soundtrack springs from The Nurse's portable tape player, a collection of 70's California music remembering better days. Grade:

First time feature writer-director Drew Pearce takes on a whole bunch of stuff in his dystopian future world where the corporation owns the water supply for drought-stricken LA and hold the city in its grip. The people fight back and the riots threaten to destroy LA and, in its path of destruction, the criminal sanctuary and hospital, Hotel Artemis. Despite the encroaching violence, it is business as usual at the hotel as the Nurse greets two “members” (Sterling K. Brown and Brian Tyree Henry) who come for treatment for their bullet wounds. But, you cannot simply walk into the Hotel Artemis and demand treatment. There are strict rules in the establishment and the security system keeps the nonmembers out. That and the Nurse’s assistant and “health care professional,” Everest (Dave Bautista, the most endearing character in the film). The dark action-thriller that is the base for “Hotel Artemis” is over-shadowed by its companion character study of the Nurse. Jody Foster, with convincing age makeup, envelops her enigmatic character who, on the surface, is a strict taskmaster who enforces the hotel rules, no exception. Then, she sees on one of the hotel’s outside monitors a young woman cop, badly injured, begging to get in. This incident is the catalyst for change in the Nurse, who knows the woman and memories about the son she lost 20 years ago – to drugs or violence? – flood back. Suddenly, the rules change, at least in this one case. But, not for crime kingpin, Oren Franklin, who still must follow these rules, if he is to get treatment. Another “patient,” the sexy Nice (Sofia Boutella) is also there for a bullet wound but she has an ulterior motive. Plus, there is Mr. Acapulco (Charlie Day), a petulant patient who demands the protection of the Hotel Artemis fortress from the outside violence. While these disparate story threads do come together, few garner full attention as the action shifts continuously. “Hotel Artemis” has a moody, foreboding atmosphere with dark hues that convey the sinister goings on. It is a den of the worst criminals, but their money and always-maintained membership ensures their care. But, can the high-level of security at the hotel protect it and its inhabitants from the coming riot? You have to see it to find out.