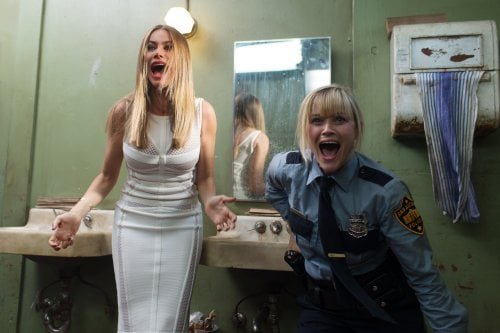 Straight arrow Texas cop Officer Cooper (Reese Witherspoon, "Wild") is thrilled to be tasked with escorting mob wife Daniella Riva (Sofía Vergara, TV's 'Modern Family') across the state to testify against a dangerous drug lord, but before Riva's even finished packing they are under assault and Cooper must wrangle her slippery witness with crooked cops and crazed criminals in "Hot Pursuit."

Reese Witherspoon is funny as hell, nailing physical comedy, timing and a plummy r-rolling Spanish accent in a movie that doesn't deserve her talents. "Hot Pursuit" feels like a comedy written by a machine that analyzed old odd couple buddy movies and spit out the most generic, seen-it-all-before plot imaginable. If you've seen the trailer (and who hasn't), you've seen all the best bits. Director Anne Fletcher (“The Proposal”) (and screenwriters David Feeney of TV's 'Two Broke Girls and John Quaintance of TV's 'Joey') shows more originality during the film's opening title credit sequence, in which we see Cooper grow up in the back of her dad's squad car, than she does during the entire rest of the film. As the odd couple, now branded criminals, hit the road, TV news reports continually make Cooper shorter and Daniella older, much to each's outrage. Where male odd couples in crummy comedies resort to homophobe panic, this film just subs in the lesbian equivalent. And guess what? A trusted individual shouldn't be while two who appear to be enemies aren't. Sofia Vergara does her usual schtick, her best gag a wail that competes with a police siren, but this is Witherspoon's film (sadly she has a producer's credit). As Randy, an inadvertent stowaway turned love interest, Robert Kazinsky ("Pacific Rim") has low key charm but is under utilized. As Cooper's Captain, the terrific character John Carroll Lynch ("Zodiac," "Gran Torino") has nothing to do, nowhere to go in a role so stock it could have been portrayed by a cardboard standup. Comedian Mike Birbiglia has a mildly amusing little bit, but Jim Gaffigan isn't so lucky. The pairing of Witherspoon and Vergara is actually quite inspired, but "Hot Pursuit's" inspiration stopped dead in its tracks after its stars were cast. Grade: