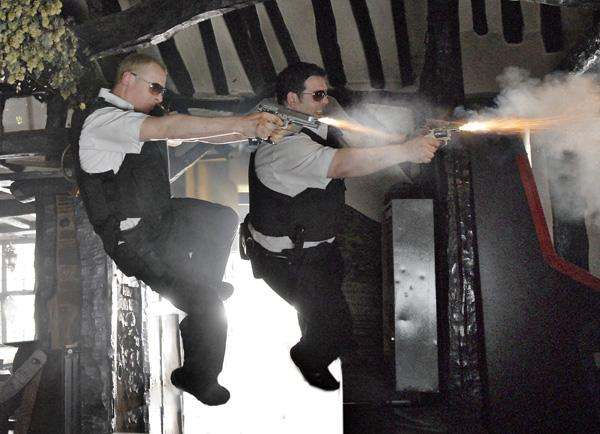 Police constable Nick Angel (Simon Pegg) is not just one of London’s finest, he IS the finest. With an arrest record 400% better than his nearest rival on the force, he has become an embarrassment to the less ambitious cops, especially his bosses. The solution to their “problem”? Send Angel to the remotest, quietest little hamlet in England – Sanford. But things are not quite what they seem in the supposedly sleepy little town and Nick has the chance to get back in form in Hot Fuzz.”

Enraged by his treatment at the hands of humans after marrying one, the widowed Dracula (voice of Adam Sandler) is determined that his daughter Mavis (voice of Selena Gomez) always be safe. And so, he builds a respite for his kind, a place where family friends like Frankenstein (voice of Kevin James) and Wolfman Wayne (voice of Steve Buscemi) will gather to celebrate Mavis's 118th birthday, "Hotel Transylvania." Sandler and Samberg are united for the second time in 2012, this time not as father and son but as father and potential son-in-law. They were funnier the first time around. This overprotective dad story by Todd Durham and Dan & Kevin Hageman (TV's 'Ninjago: Masters of Spinjitzu') (screenplay by Peter Baynham (2011's "Arthur," "Arthur Christmas") and Robert Smigel ('SNL')) is a Universal monster mashup draped over the bones of 'The Munsters,' albeit without the laughs. The best thing about "Hotel Transylvania" are the vocal performances of Sandler (his Romanian disdain for the phrase 'blah, blah, blah' is a gem) and Buscemi. Samberg ("That's My Boy!") is the not-too-bright backpacker Jonathan who shows up to get hostility instead of hospitality and to 'zing' with Drac's daughter, but the pair have no zing at all and are awfully boring characters. The filmmakers have a problem with female characters in general - turning Frankenstein's bride into Jewish caricature Eunice (voice of Fran Drescher) is misguided at best and multiple-dad Wayne is saddled with Wanda (voice of Molly Shannon), as bland as Little Red Riding hood's real grannie. There are a couple of good jokes involving Wayne and The Invisible Man and some decent visual gags - including a literal one from The Fly running an aqua aerobics class - but on the whole this is one unfunny comedy. For a film that takes shots at "Twilight," no one's bothered to solve the mystery as to how vampires can procreate, either.