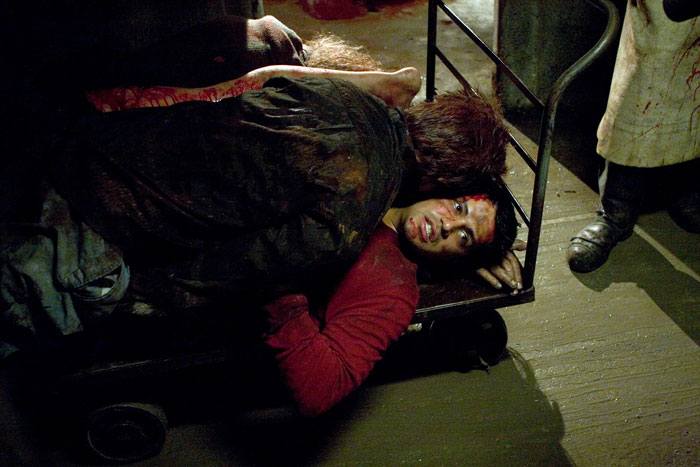 When loutish American backpackers Paxton (Jay Hernandez, "Crazy/Beautiful," "Friday Night Lights") and Josh (Derek Richardson, "Dumb and Dumberer: When Harry Met Lloyd") and their Icelandic buddy Oli (Eythor Gudjonsson) get locked out of their Amsterdam digs late one night, they're invited in by Alex (Lubomir Silhavecky), a stranger who tells them they'll find all the willing sex they could ever dream of in a small town outside of Bratislava. All they need to do is check into the small Slovakian village's "Hostel."

Writer/director Eli Roth, who gave us the mildly amusing splatterfest "Cabin Fever," has been given Quentin Tarantino's seal of approval for his sophomore effort, but don't let that fool you. "Hostel's" concept may be horrifying should the urban legend at its source ever prove true, but in execution it is nothing but a reined in gorefest for aficionados of torture, and even they won't be happy until the director's cut DVD is issued. Roth has the wit to foreshadow his victims' fates but that's it. After failing to lose his virginity in Amsterdam's Red Light district, Josh suffers the further indignity of a close encounter with a weird Dutch businessman (Jan Vlasák) who eats his food with trembling hands, but his luck seems to change when he and Pax check into their semi-private room. There they find topless Natalya (Barbara Nedeljakova) and Svetlana (Jana Kaderabkova) who invite the boys to join them in the spa. After a night of disco, the boys get lucky, just like Alex said they would, but the next morning they can't find Oli. They're told he's 'checked out,' and later they're disturbed to see a local wearing his distinctive orange jacket. Apparently not quite alarmed enough, the duo spend another night discoing. Paxton is lucky enough to get locked in a store room, but Josh awakens to find himself shackled in a torture chamber, the plaything of the very man who touched him on the train. Now Paxton's looking for two friends. After pushing a now obviously strung out Natalya for information, he finds them. Roth's script was inspired by a web site shown to him by aintitcoolnews webmaster Harry Knowles that purportedly sells 'murder vacations' in Thailand. The idea of snuff for sale has been around for a long time though - Johnny Depp made a film back in 1997 called "The Brave" (it was never released in the U.S.) based on the same concept - yet Tarantino claims to have never heard of this 'sick idea' before. And herein lies the problem - Roth has directed a sick movie, not a horrific one. It is the mind of the torturer that terrifies, not seeing his twisted acts played out before us in brutal detail. And Roth realizes this with one very effective scene in his film, one where a privileged American (Rick Hoffman, "Cellular") ponders the 'thrill' he's about to enjoy. The film also builds well (although initial scenes in Amsterdam coffee bars are cartoonish) with a sense of doom closing in around Paxton as the fairy tale-like pleasure town turns distinctly dark (even if there is no logic as to why prostitutes must pleasure their captives before turning them over to their real fate). But from the point of Paxton's entry into the dank dungeons of Roth's torture palace (an abandoned Czech mental hospital, appropriately enough), the film has nowhere to go. Roth even sucks the wind out of his own third act revenge agenda with an entirely gratuitous suicide that undercuts Paxton's actions. "Hostel" arrives on a wave of notoriety that it never delivers on, even with the imprimatur of Tarantino and cameoing Japanese genre director Takashi Miike. In and of itself it inspires no horror nor is it the unrelentingly depraved movie some gorehounds will queue up for. It's an exploitation film for xenophobes.