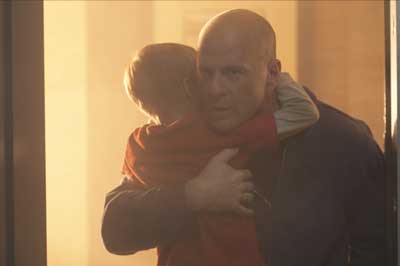 Burned out, ex-LAPD cop, Jeff Talley (Bruce Willis), following a deadly standoff, quit his job as a hostage negotiator and moved his family to the upscale, crime-free burg of Bristo Camino in Ventura County. Crime-free, that is, until three young thugs break into the wrong house and take its family hostage. The mob accountant owner (Kevin Pollak) of the heavily armored house has evidence that could put his gangster boss away for a long time. So the mobster, to protect his “investments,” takes Jeff’s family captive as incentive for the police chief to save the accountant and his family and keep the incriminating evidence from falling into police hands in “Hostage.”

Jeff Talley (Bruce Willis) thinks he's left his nightmarish career as a hostage negotiator behind him to become police chief in a high income, low crime California town, but when three teenage car jackers coveting an Escalade break into a gated estate, things quickly spiral out of control. Their victim, Walter Smith (Kevin Pollak, "The Whole Ten Yards"), is a money-launderer for the mob and the mob, desperate to regain possession of a highly incriminating disk, blackmails Talley into retrieving it by taking his wife and daughter "Hostage." In "Die Hard," the movie that made Willis an action hero (while also giving a seriously needed overhaul to the genre), Bruce was a tough guy with 'tude and swaggering cheek whose evident destructibility made us care and kept tension in the film. In this grim piece of overstuffed pulp, Willis is in constant anguish with no opportunity for show offy head games and faces such an overwhelming amount of challenges to be overcome we're too worn out for knuckle biting. Still, director Florent Emilio Siri ("The Nest") is so caught up in his florid stylings that "Hostage" is somewhat enjoyable on a cheesy level. After a predictable, if effective, prologue that fills us in on Talley's history, we're brought to the present where Jeff is working on his marriage to Jane (Serena Scott Thomas, "The World Is Not Enough") and the resentment of teenage daughter Amanda (Bruce's daughter Rumer Willis) for transplanting them from L.A. Meanwhile, brothers Dennis (Jonathan Tucker, "The Deep End," "The Texas Chainsaw Massacre") and Kevin Kelly (Marshall Allman, "Little Black Book") along with creepy chum Mars (Boston native Ben Foster, "Northfork," "The Punisher") are targeting the upscale SUV and the 'rich bitch' acquaintance (Michelle Horn as Jennifer) whose Daddy owns it. They're seen inside the house by Jennifer's little brother Tommy (Jimmy Bennett, voice of Roo in "Pooh's Heffalump Movie"), one of those adventurous, capable preteens, who wisely sets off their security alarm, but the officer who comes to investigate is shot by Mars, a budding psychopath eager to bloom. When Talley attempts to extricate himself from the hostage situation which erupts by handing over the reins to state law enforcement, he's forced to weasel his way back in as an undercover agent for the mob or lose his own family. Not content with this double barrelled setup, screenwriter Doug Richardson ("Welcome to Mooseport," "Die Hard 4"), adapting a novel by Robert Crais, throws in territorial power disputes both within the car jacking gang and among government employees (Talley even leans on an old EMT buddy to administer a potentially life-threatening injection to Smith), a media circus, child endangerment, animal executions, the threat of rape, a faux FBI SWAT team, shootouts and firestorms. The information that the mob is intent upon grabbing is disguised as a "Heaven Can Wait" dvd for no apparent reason and even when Tommy, who Talley has been forced to jeopardize as a gofer, finds the 1978 version first (his dad used the 1943 title), he seems to know enough to grab the older movie as well, a useless waste of maguffin on multiple levels. Siri, who suggests either a megalomaniac or a guy really having one over on us, adds all kinds of deranged tweaks to the action, beginning with his technique of bleeding color up and down for scene transitions. His most hilariously out there moment features Jennifer, her trashy gear swaddled in a blanket Virgin Mary style, dolefully watching Mars bearing down brandishing Molotov cocktails like an antiChrist. Siri's taken a series of dire predicaments and exploited them for trash entertainment. "Hostage" would have been a perfect drive-in flick.

French helmer Florent Siri (“The Nest”) has crossed over the Big Pond to take on the task of renewing Bruce Willis as the preeminent action hero since he took over that position in 1988 with “Die Hard.” The latter actioner reinvented the genre and made its star, Willis, into an international phenomenon. Since then the actor has never quite reached the hero heights he did in ’88 but has certainly made a lucrative career trying to reprise his John McClane-level of action icon. With “Hostage,” Willis travels a well trodden road as a man whose life is nearing ruin because of a terrible murder/suicide incident in his past. Now the chief of police in backwater Bristo Camino, Jeff Talley still has unresolved inner conflicts that have estranged his daughter, Amanda (Rumer Willis), and threaten to ruin his marriage to Jane (Serena Scott Thomas). Heading to work on yet another peaceful day in Ventura County, CA, Jeff has an encounter with the three young men who are up to no good. They pass like ships in the night, though, and go their separate ways. A while later, the three thugs spot Walter Smith (Pollak) and his children, Jennifer (Michelle Horn) and Tommy (Jimmy Bennett), driving in their fancy Cadillac Escalade and follow them home. The plan is to carjack the Caddy but, when ringleader Dennis (Jonathan Tucker) and his quiet sidekick, Mars (Ben Foster), break in to the Smith house, things go wrong and a hostage crisis begins. Chief Tulley arrives on the sense after one of his police officers is gunned down in cold blood by Mars. Jeff pulls the cop out of harm’s way but she dies before help can arrive. He turns the case over to the County Sheriff’s office and heads home to try to patch up his family life. Suddenly, he finds himself under the gun of a gang mystery men, the leader of whom tells Jeff that he had better end the hostage crisis or else. The stranger then shows Tulley his incentive – wife and daughter trussed up and gagged in the back of a van. The Chief has no other recourse but to end the crisis if he wants to save his family. From here things get into kitchen sink territory as coincidence and cliché abound and Jeff must do whatever he can to wrap it all up. Adapting Robert Crais novel, screenwriter Doug Richardson creates a by-the-numbers action thriller that has all the requisite elements for the genre but falls far short of the originality of “Die Hard.” The story manufactures one obstacle after another for our hero, Jeff, and he overcomes them all – with a little help of his inside guy, young Tommy, who has freed himself and acts as Tulley’s eyes and ears. Complicating this is loose cannon, Mars, who, we come to find out, gunned a convenient store clerk down and calmly watched as the man died. We know that Mars is the monkey wrench thrown into the works and nothing good will come of him. There are some imaginative aspects to “Hostage,” like Ben Foster’s psycho Mars, but I felt that I had been at this trough too many times before. Willis has put aside the wisecracking cockiness of his early years and plays Chief Tulley as a very troubled, sullen man whose life is going down the tubes. It’s a change from his past performances but never gets beyond two-dimensional. The supporting cast is adequate but do not come across as real people. Second billed Kevin Pollak is unconscious for much of the film, woefully underutilizing the competent actor. Ben Foster lends an oddly compelling sinister nature to his crazy Mars. The rest of the cast do their jobs and collect their paychecks. Techs are in keeping with the moody nature of the film with cinematographer Giovanni Fiore Coltellacci and production designer Larry Fulton keeping it dark and in tones of blue and gray. There is a nice crispness to the mostly night and interior shots that are punctuated with a slue of explosions and flame that make up the film’s big climax. Unfortunately, the big climax does not represent the end of the film and, much to my chagrin, there is the second climax that really wraps thins up. Unfortunately, the second ending feels tacked on, even if it is “necessary” to the plot and only made me want this thing to end. I braved a blizzard to see “Hostage” and my regret is that the dangerous drive should have been for a better movie.