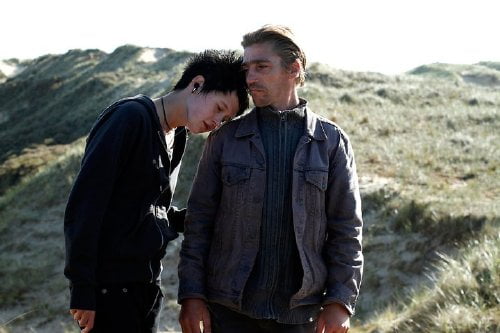 A man (David Dewaele) walks across the rolling fields near a small French village. He meets a troubled young woman (Alexandra Lematre) who tells him, “I can’t take anymore.” The man replies, “There is only one way.” Soon, a shotgun blast kills another man – was he the girl’s abuser? This is one of the many questions raised in the landscape rich “Hors Satan.”

In southwestern France on the Côte d’Opale a homeless man (David Dewaele, "Hadewijch") is regarded as a savior and possible lover by a teenaged farm girl (Alexandra Lemâtre), as a healer by the mother (Sonia Barthélémy) of another, younger girl (Juliette Bacquet) and as a trespasser by a local guard (Christophe Bon) who has designs on the farm girl. The fate of a female hiker (Aurore Broutin) who encounters the man on her way to Boulogne has eerie connections to the town's two young girls in writer/coeditor/director Bruno Dumont's ("Humanité," "Flanders") "Hors Satan." A small village bordered by the sea and the road to Boulogne features a mountain, wild flower fields with a divided cistern, woods and dunes, where the taciturn man makes camp beside the fragment of a long ago foundation. This varied, compact landscape is contemplated by the man and the teenager in meditation and perhaps prayer. They spend hours silently walking, but their time together is punctuated with violence. When we first see the two together, the girl, in what will become apparent is a ritual, asks for a cigarette, but she is visibly upset and says only that she 'cannot take it anymore.' After a while, the two have made their way outside a barn and the man lifts a shotgun, killing the man coming out. We can surmise that the girl was being abused, and indeed, this supposition is confirmed later when her mother (Valérie Mestdagh) apologizes for the harm caused by her stepfather. In a scene which will be repeated twice more, police tape goes up around the crime scene, but no one appears to be questioned or arrested. The man is called into a neat little home in the village by a distraught woman. He enters a darkened bedroom where a young girl lies and is thanked on his way out (during a second visit, we will witness what he does, a type of breathing in through the mouth or moaning out, a primal type of exorcism). The farm girl tries to get him to kiss her, but he resists with a smile. She also brings him food and lets him into her home when her mother is not there. Young village boys taunt them with calls of lovebirds. When the guard who has asked the man to get off the land tries to kiss the same girl, seemingly unobserved, he's badly beaten in the forest and taken away by ambulance. Another man looks stonily towards the homeless man and his friend. This stout guy has an Alsatian, Hugo, the only character named in the film. "Hors Satan" ("Outside Satan") is full of events which could be construed as religious. When the woods are seen ablaze across the horizon, the man tells the girl that if she crosses the narrow divide in the middle of a cistern, it will cease. And so she walks on water. The hiker who asks him for directions, then invites him to have sex receives similar treatment as that sick young girl, but this time it's decidedly horrific. Her fate is a mirror image of the farm girl's, with Baptism, Sacrifice and Resurrection all coming into play. Dumont's protagonist is an enigma, sometimes Christlike, other times demonic. This dichotomy is reflected in the actor's startlingly commanding face, handsome on the upper half, something other on the bottom (Dewaele resembles a handsomer Jackie Earle Haley). He looks like a wood cut of a Spanish priest. On the flip side, we meet the farm girl with short, spiky hair, but over the course of the film, her hair is often flattened to look like Joan of Arc. The film has little dialogue and features only natural sound. Images are carefully composed (in one notable shot, the girl and her friend stand, heads titled towards each other, eyes closed and they look like they could be brother and sister, yet the actors bear no resemblance). "Hors Satan" could be grouped with Carlos Reygadas' "Silent Light" (itself based on Dreyer's "Ordet") and the films of Robert Bresson, but his minimalism makes his meaning more elusive, inviting less emotion than those filmmakers. This is a work that engages throughout, at least for those who can take a determined pace, but it may elude a spiritual connection with the viewer.

Writer-director Bruno Dumont indulges himself with his lyrical, thoughtful story of a man who may be evil or a guardian angel (or both) as he takes the girl under his protective wing. What happens, though, are long walks by the man and the girl as they travel miles, it seems, only to gaze at the mountains, fields, valleys and the sea, usually at sunrise or sunset. The ambiguity of the episodic story with its sparse dialog, combined with the visually stunning landscape photography, makes “Hors Satan” a compelling, if overly long, composition. The long shots of scenery – very long – are beautiful but are lingered on to excess. The 110 minute film could have 30 minutes cut and not be so self-indulgent. Still, it is a beautiful looking film with an intriguing character in the man.