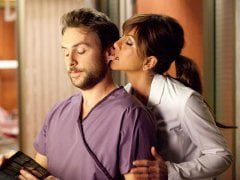 When Nick Hendricks (Jason Bateman), Dale Arbus (Charlie Day, "Going the Distance") and Kurt Buckman (Jason Sudeikis) get together for a few drinks, each one of them has a tale that's worse than the last about how excruciatingly awful their jobs are, and it's all because of who they report to. So when Dean 'MF' Jones (Jamie Foxx) introduces himself and offers them a solution for a price, they're surprised to discover they actually do want to bump off their "Horrible Bosses."

Take the old Jane Fonda/Dolly Parton/Lily Tomlin/Dabney Coleman vehicle "9 to5," cross it with "The Hangover" and add a dash of Hitchcock's "Strangers on a Train," mix it up sloppily and you've got "Horrible Bosses," a formulaic film which shouldn't work, but does largely due to the talents of its well chosen cast. Director Seth Gordon ("The King of Kong: A Fistful of Quarters," "Four Christmases") gives the film a loose, shambling pace that surely suited a production which must have been high on improvisation. Those who've formed an allergy to Jennifer Aniston comedies may want to give her another chance as not only is she smoking hot here, but her Dr. Julia Harris, D.D.S. is one highly focused - and funny - sexual predator. So Nick's credo is that 'the key to success is taking sh*t,' something he's been doing for years under Dave Harken (Kevin Spacey), a guy so mean he kept Nick from his grandmother's deathbed. Harken strings Nick along under a barrage of abuse dangling the carrot of promotion to Senior Vice President of Sales, but when he makes the promotion announcement it's to say he's added the job description to his own. In private, he tells Nick that he's 'his bitch,' because Nick can go nowhere without his letter of recommendation. At Pellit & Sons chemical company, Kurt's best buddy is owner Jack Pellit (Donald Sutherland), even though Jack employs his own cretinous coke head son Bobby (Colin Farrell, sporting a comb over). When Jack has a heart attack, Kurt's promised ascension to the president's chair is foiled by the son who wants to undercut all his father's good values to drain the company of all the capital he can squeeze, even if it means exposing South American civilians to potentially fatal health hazards. All Dale's ever wanted to be is a husband and he's just gotten engaged to the sweetest girl, but Julia is a raging nymphomaniac obsessed with stealing his virtue. It's to Aniston's credit that she really makes Dale's situation seem intolerable and a natural joke that Dale's buddies find his the least of their problems. Kurt's the first one to fall in with the idea of a hit man, justified with the Hitler defense of taking one for the good of many, but it's Dale who thinks he knows what it takes to find the right guy. His first attempt, an online ad for 'wet work,' produces a James Bondian professional (Ioan Gruffudd, "W.," "Sanctum"), but Dale's interruption of his 'code' is hilariously off. Jamie Foxx isn't the brightest bulb in the shady bar they choose to trawl in, but he still manages to get the better of them, taking their cash before informing them that his parole status means he can only 'consult' and that it's up to them to get the actual job done. An old Hitchcock film (or a newer Danny Devito one?) provides the inspiration for them to trade murders. Of course nothing goes right for the guys, who bumble and stumble only to be helped along inadvertently when one of their mistakes sets off a chain of events that produces their desired results. The fun of the film is, as usual in these types of buddy comedies, how the three wildly disparate personalities interact. Bateman is the uptight one, the worriwort, the straight man to the other two, Sudeikis and Day reteaming from the underrated "Going the Distance." Sudeikis is the smoothie and lady's man, while Dale is, like his cartoon namesake, a hyperactive chipmunk who works overtime on the old "Annie Hall" cocaine joke. Jamie Foxx hasn't been this good in years in a truly funny performance that wouldn't have been out of place in "Fargo." Spacey's played this role before ("Swimming with Sharks"), but he doesn't phone it in and Farrell just lets himself go way out there. Celia Finkelstein makes a mark as pregnant Marge, a Pellit employee and an against-type cameo from Bob Newhart that's not as funny as it set out to be. Aniston's the revelation among equals. The production is adequate, although Bobby Pellit's home is a comic high point. And if the other big comedy opening today, "Zookeeper," shills for T.G.I. Friday's, "Horrible Bosses" has Applebee's. There's an amusing coda which pulls the rug out from under a seemingly happy ending followed by the de rigeur outtakes which are often funnier, especially in Farrell's case, of anything in the film. "Horrible Bosses" is formula whose shaggy style makes it play like something more inspired. Bateman, Sudeikis and Day are the new Helms, Cooper and Galifinakis. And Aniston is the new Jolie, only wickedly funny. After her appealing turn in Sandler's "Just Go With It," Jennifer should play with the rude boys more often.