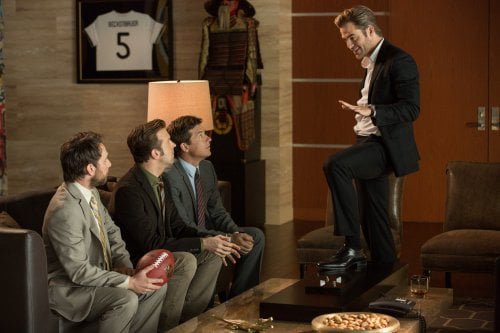 Now that Nick (Jason Bateman), Kurt (Jason Sudeikis) and Dale (Charlie Day) have gotten rid of their awful overseers, they're ready to start their own business. But after pitching their Shower Buddy to Bert Hanson (Christoph Waltz, "Inglourious Basterds"), CEO of the country's largest catalog retailer, who gets them financing with his exclusive order, they discover he's a shark who intends to bankrupt them and take over the spoils. But Hanson's son Rex (Chris Pine, "Star Trek: Into Darkness") has his own axe to grind with dad and comes up with a kidnapping plan to benefit them all in "Horrible Bosses 2."

It's astounding that cowriter (with his "We're the Miller's" partner John Morris)/director Sean Anders ("Sex Drive," "That's My Boy") needed two additional folks (Jonathan M. Goldstein and John Francis Daley) to come up with this hackneyed sequel to a film that coasted by the first time around on the strength of its cast. Although all who remained alive in the original return, even they can't prop up this dismal, coma-inducing cash grab. After 'launching' their new product on Good Morning L.A. with a tired gay sight gag followed by a racist 'joke' that's an attempt at being edgy but which is merely nonsensical, the lads get what they thinks their lucky break. They turn down Rex's offer of a one-shot buyout, only to be saved when dad walks in with a better offer. They find manufacturing space and hire inappropriate people to run it, Kurt needing reminding that he can't hit on all the hot, inexperienced women he's brought in (oh, how meta - yawn). When they realize they've been had, the boys come up with the kidnapping scheme on their own, but of course they blow it (while we're given an opportunity to see what a 'horrible boss' Rex is, heaping abuse on his housekeeper). Caught out, they're surprised when Rex offers to join the plot, incensed that dear old dad valued his money more than his life. Nick wants nothing to do with it, but Rex proposes a brainstorming session to win him over. Here the filmmakers come up with their best bit, a visualization of the thought out plot preceding the botched reality. Dave Harken's (Kevin Spacey) pulled back into the picture as a consultant. A need for an anesthetizing drug finds Dale remembering the code to his old office, where Dr. Julia Harris, D.D.S. (Jennifer Aniston) holds sex addiction meetings at night to find new prey (she enjoys 'flipping' gay men - time for more homophobic hilarity). I found one smile in the entire running time, a non-verbal scene of the tiring trio and their mentor, "MF" (Jamie Foxx), sharing a Twizzler. Aniston's still willing to push raunchy boundaries, but she's so dewy looking here one suspects her scenes have been shot through a Vaselined lens. Pine's overly manic and Waltz is more of a straight man than a humorous horrible boss. A running gag featuring Dale's wife Stacy (Lindsay Sloane) goes nowhere. "Horrible Bosses 2" is so uninspired, even its soundtrack, featuring the likes of The Heavy's "How You Like Me Now," is tired. Grade: