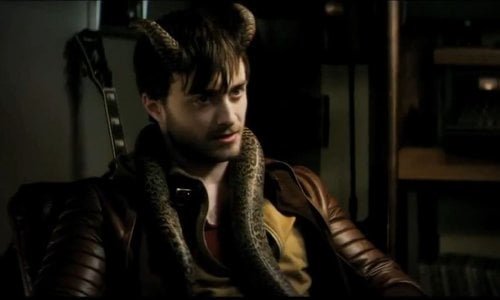 Ignatius Perrish (Daniel Radcliffe) has loved Merrin Williams (Juno Temple) ever since they were kids. That ends on the night he plans to propose to her and she, instead, breaks up with him. He drives off in tears, leaving Merrin at a local diner. What he does not know is that it is the last time he will see her in “Horns.”

Ig Perrish (Daniel Radcliffe) has been in love with Merrin Williams (Juno Temple, "Killer Joe") since they were kids, but on the night he proposes to her, she's brutally murdered and in almost everybody's opinion, Ig killed her. Drowning his sorrows at the local bar after even his mom (Kathleen Quinlan, 2006's "The Hills Have Eyes") voices doubt, Ig's taken advantage of by bartender Glenna (Kelli Garner, "Taking Woodstock"), who's long held a torch for him, but when he awakens in her apartment the next morning, Ig makes a shocking discover - he's sprouting "Horns." Well, if his recent acting gigs haven't proven star Daniel Radcliffe has moved well beyond Harry Potter, consider this - another actor, Mitchell Kummen, portrays his character here at 13. Radcliffe's terrific as the grief stricken outcast who responds devilishly when he learns about his new found powers in this crazy genre mashup directed by Alexandre Aja ("High Tension," "Piranha 3D"). Keith Bunin's (HBO's 'In Treatment') script bears the hallmark of novelist Joe Hill's ancestry, with an extended flashback right out of the Stephen King playbook, but it is his and Aja's use of their Satanic leitmotif that gives the film its kick. The movie begins like a Grimm Brothers fairy tale - or a love scene from "Twilight" - as Ig and Merrin cuddle in a lush forest ('Are you horny?' she asks). Then Aja pans down through the dirt to bring us into his present day underworld, where Ig peeks out his blinds to see a media storm. Escaping to his folks' home, Ig counters his successful music producer dad's (James Remar, "Django Unchained") insistence on engaging a high priced attorney with loyalty to his old friend Lee (Max Minghella, "The Social Network"), stating that Lee actually believes in his innocence. Radcliffe's convinced us too, so just who killed Merrin? The fun begins when Ig learns that while people see his horns, they quickly forget the fact but do begin to spill their innermost secrets. Glenna asks him if she should consume an entire box of donuts, because nobody wants her anyway, then proceeds to stuff three in at a time. Puzzled, Ig heads to his doctor's where the receptionist flips out over an unruly child in the waiting room and Dr. Renald (Alex Zahara, "Open Range") takes advantage of Ig's anaesthesia to schtup his nurse, the horn amputation proving fruitless. On and on this goes from Ig's priest to his own mom's hurtful confession. When Al decides to burn down his bar for the insurance money, Ig walks out of the flaming building and gleefully instructs the media to fight each other for his first exclusive. A melee ensues. There's only one person unaffected by the power of Ig's horns. This revelation is what leads to the flashback of a childhood incident involving a dare, a cherry bomb and the wooing of Merrin that pretty much points out the genesis of the murderer, but the filmmakers choose a convoluted path complete with unconvincing red herrings as they work their way towards their finale. It's more fun to look for witty touches, like just how a cherry bomb accident mutilates its victim, by leaving his hand in a natural formation of the Italian horn gesture (the real meaning of which, cuckolding, adds yet another layer). But while the film may bog down in plot mechanics, special effects and the overacting of Heather Graham, it does have something to say about love, the power of truth and forgiveness. "Horns's" Satanic antics provide the wit, but it's got heart too.

Unusual is one word I would use to describe “Horns.” After Merrin’s death, Ig wakes up after a drunken one night stand, to find the titular horns beginning to sprout. He also finds that, as the horns grow, that he has the power to make people speak their minds. And, he is the prime suspect in Merrin’s murder There is a lot of other stuff going on in “Horns.” Ig can make people bid his will – which leads to a comical interlude of horned Ignatius making the horde of media fight each other for an exclusive. There is the murder mystery as Ig uses his powers to track down the real killer. Frequent flashbacks to the good old days with Merrin provides the fuel for the angst the anguished present day Ignatius feels for his loss. So, that covers supernatural and romance. Oftentimes, though the film veers off into darkly humorous interludes of satanic references – not just the horns, but serpents, Ig walking out from a smoking inferno (very nicely shot), a dog barking when Ignatius comes near and, of course, the signature pitchfork. The satiric, religion-over-toned humor, the romance and the serous murder mystery make for an odd, but entertaining, mix of genres. This is not a bad thing.