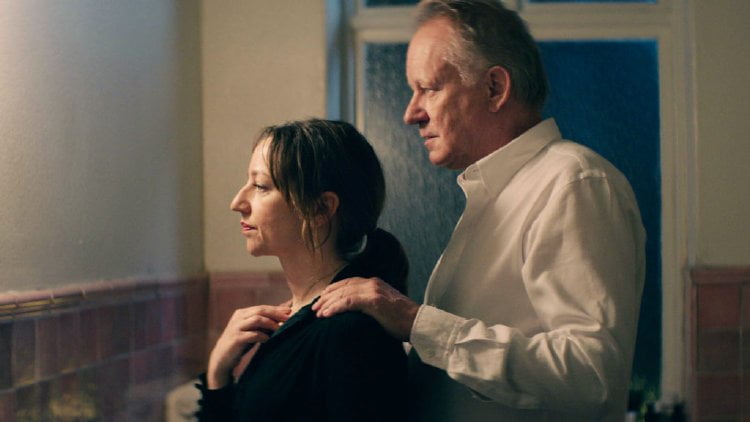 Returning home from Amsterdam where her new theatrical production was well received, Anja (Andrea Bræin Hovig) is annoyed to find her partner Tomas’s (Stellan Skarsgård) son Henrik (Eirik Hallert) making dinner for their six children because his father is at work.  They’ve been growing apart, but it will be the most devastating type of news imaginable right before Christmas that will, oddly, give this couple “Hope.”

Norway's submission for the International Oscar, which was shortlisted but not nominated, is director Maria Sødahl’s painfully real autobiographical reconstruction of how an alarming cancer diagnosis metamorphosized her romantic relationship.  Told as the Christmas and New Year’s holidays are being celebrated by Anja’s blended family, “Hope” is a raw and moving modern love story.

After expressing her annoyance with Tomas for not tending to the children per their agreement, Anja heads to their family doctor (Kristin Voss Hestvold) complaining of bad headaches and is sent for tests.  We learn that the former smoker had successfully beat lung cancer, but now it has not only reappeared, but spread to her brain.  Distraught by the idea of leaving their three young children without a mother, Anja tells Tomas ‘You don’t have to love me just because I’m dying but I need you to help me.’

Anja, who’s been given Medrol to decrease the fluid pressure on her brain, struggles valiantly to get through Christmas as if everything is normal, but the news that Tomas has invited a French producer and his daughter to Christmas Eve dinner nearly undoes her.  Tomas quickly makes other arrangements.  At the dinner table, Anja’s father Martin (Einar Økland) toasts her return to them ‘in good health.’  Tomas gifts her with a long-dreamed of trip to India, one which she now believes she’ll never take.  On Christmas, the entire family heads to a party at their friend Arthur’s (Alexander Mørk Eidem) where Anja shares her news with good friend Vera (Gjertrud L. Jynge), who will prove a life saver over the coming days.

Told by the very caring oncologist to ‘always give the kids 10% more hope than you have,’ the couple break the news to their children after Anja’s brain surgery is given top priority, scheduled for January 2.  Then he surprises her by saying they’ll get married.

Sødahl’s tale is rich with emotion, from Anja’s relationship with her children, to her complicated life with Tomas.  Waiting for yet another medical appointment (the stress of dealing with a critical diagnosis during the holidays extends to access), the couple have a very revealing heart-to-heart in their car.  Wedding preparations provide Anja a further platform for couple’s therapy, Tomas declaring her recitation of their history to a chaplain ‘brutal,’ all of her resentments spilling out when he disrespects tradition by visiting her in a hair salon on their wedding day.

The filmmaker notes each passing day from December 23rd through January 2nd, wisely abbreviating January 1st, the first full day of Anja and Tomas’s marriage and last day before she goes under the knife.   The film’s pinnacle is the wedding itself.  Arriving right after a piece of extremely heartening test results, it is a joyous celebration aglow with evening candlelight, all the sounds of the ceremony fading away as Anja and Tomas stare deeply into each other’s eyes.  The two actors are brilliant together, Hovig a bundle of fear, resentment, caring and drug-fueled emotional zigzags while Skarsgård supports her with a quieter performance in which he manages to convey his love for Anja even during their rockier moments.

The film’s conclusion is note perfect, the very picture of love and union during a critical moment. One cannot help but come away from Sødahl’s film filled with anything but “Hope.”

Just one year ago Anja (Andrea Braein Hovig) survived lung cancer. But now, at the cusp of the Christmas holidays, she receives bad news: a tumor, possibly because of the earlier disease metastasizing, has appeared on her brain. Instead of the pleasures of the family gathering, she must now make some very hard decisions as she tries to keep up “Hope.”

Stellan Skarsgard is a known and reliable actor and is Tomas, the male half of the partner-artist couple that is the focus of “Hope.” But, his costar Andrea Braein Hovig, as Anja, is the powerhouse that drives this family drama. She is a complicated woman who never married her partner but had three kids with him. She is also a celebrated dance choreographer recently returned from a successful tour. Plus, the Christmas holidays are upon them and the family, including his older children, gathers to celebrate.

Then comes the phone call from her doctor and, with it, the lightning bolt of bad news. Anja, because of the tumor, may be facing a fast-approaching death, an experience that is overwhelming in and of itself. She then must cope with Tomas and the impact her death will have. But, her biggest challenge is how to tell the kids.

The challenge is met head on by Anja as she scours on line medical sites trying to find a straw to grasp. Her story is about how she deals with her seemingly certain death while worrying about her family and what they would do without her. She keeps up mission of survival and she grasps to life with any possible glimmer of hope and this makes for a complex character study expertly performed by Andrea Braein Hovig. She is the draw that gives us “Hope.”