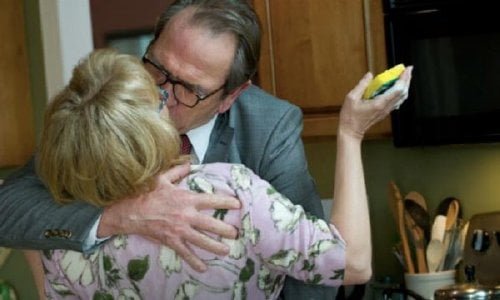 Kay (Meryl Streep) and Arnold (Tommy Lee Jones) have been married for 31 years and their life together is steeped in the daily routines and separate bedrooms. She wants to put the spark back into their marriage but he is surly and set in his ways. Kay takes the bull by the horns and makes arrangements for them to travel 1500 miles to the Center for Intensive Couples Counseling in the Maine town of Great “Hope Springs.”

Kay Soames (Meryl Streep) has watched her marriage stray off the road and into a rut. After thirty-one years, she and her husband Arnold (Tommy Lee Jones) cohabitate, not even sleeping in the same room. When her own attempts to shake things up fall flat, she finds a book whose author, Dr. Feld (Steve Carell), runs one week intensive couples therapy sessions in Maine. Kay books the trip and threatens to go without Arnold if need be. Reluctant but aware that something important is going on, Arnie leaves Omaha for Great "Hope Springs." This relatable relationship comedy from writer Vanessa Taylor (TV's 'Everwood,' 'Game of Thrones') was on the infamous 'black list' of the best unproduced screenplays and rightly so. Director David Frankel ("The Devil Wears Prada") wisely lets his actors do the heavy lifting and the result isn't so much an out and out comedy but a rather moving character study of two middle aged people making themselves awfully uncomfortable in order to attain a new ease with intimacy. Streep and Lee Jones are at the top of their games here, supported by an extremely humane and quiet performance from Carell. Arnold is apparently content with the status quo. He's served two eggs and bacon every morning in front of his newspaper, goes to work, returns and falls asleep in front of the Golfing Channel. His conversation consists of 'mm-hmmm.' But Kay, who has taken pains to keep up her feminine appearance, is obviously lonely. The children have started lives of their own but hers is going nowhere. Arnold's given a slight jolt by a coworker whose marriage ended later in life, but when he tries to apply a floral Band-Aid, it's not enough. He follows Kay to the airport and we see her surprised joy, but the journey's just begun and Arnold's not happy about it - not about spending money and certainly not about talking in front of a man he considers a charlatan, especially about sex. As the sessions continue day to day, there are frustrated separations and surprising admissions. It begins to dawn on us that Dr. Feld may help the Soameses find a marriage they never had to begin with. Streep, perfectly made up and costumed as an Omaha housewife, and Lee Jones, all buttoned up cantankerousness, do a lot of communicating to the audience about what their characters aren't saying to each other. Streep lets us see Kay's longing and dashed hopes and need for closeness. She also can bring the house down with just a 'Huh?' Jones simmers and stews and complains but his eyes let us in on a seeping awareness that Kay might just be right about life slipping away. When he finally makes his big moves, we can feel his conviction. There are some oddly big names in supporting roles, like Oscar nominee Elizabeth Shue as a sympathetic bartender and Mimi Rogers are the punch line to the film's capping joke. New Englanders are unlikely to be fooled by Stonington, Connecticut standing in as a fictional Maine town. Great Hope Springs just doesn't feel like Maine, but production designer Stuart Wurtzel (" Marley & Me") at least gets New England seaside quaint and Arnold and Kay are well represented by the Econolodge where they're booked for the week and the inn they eventually spend one night in. There are, perhaps, a few too many pop songs that coat the film in a light gauze, but they're not unduly obtrusive and the actors are more than capable of selling the real emotion. For a film classified as a comedy, it often left me a bit teary eyed.

Well, this is different – a mature romantic comedy aimed directly at couples over 40. “Hope Springs” will connect with anyone who has been in a long term relationship with his/her husband, wife or significant other. Kay and Arnold, after being together for so many years, have grown used to each other and live separate lives together. She longs for the old days when there was passion in their marriage and, when she reads self-help author Dr. Bernard Felds (a nicely cast Steve Carell), decides that, with or without Arnold, she is going to the doctor’s couples retreat. The problems that Kay and Arnold face in their longtime marriage have the ring of truth. We do get used to each other and fall into a routine after years together and the gleam can fade. Screenwriter Vanessa Taylor, when Kay and Arnold go to their therapy sessions with Bernie, captures the hesitancy and embarrassment of the couple when asked intimate questions about their sex lives and moments from their past. The discomfort felt by Kay and Arnold as they try to rekindle their lives takes genuine human moments and twists them just a little bit to put the comedy into this rom-com. Acting, in this three-hander, is first rate. Streep and Jones play their characters beautifully, especially Arnold who is a skinflint who only sees dollar signs when he has to spend some money. Arnold is set in his ways, resistant to change and critical of, well, everything, so his character has a positive arc in the end. Meryl Streep, an American treasure, makes Kay an empathetic person who we root for right to the end. Steve Carell is near-perfect as the marriage counselor who is committed to his patients and pushes them beyond their limits to save their marriages. He is like a sounding board who knows how to ask the probing questions. Director David Frankel delivers an honest portrait of a marriage that has reached a level of familiarity and complacency that is just as dangerous as one gone bad. “Hope Springs” is a complete package with good directing, writing, acting and production. It will not attract the 18-24 year old male demographic but does hit home if you are over 40 and committed to someone.