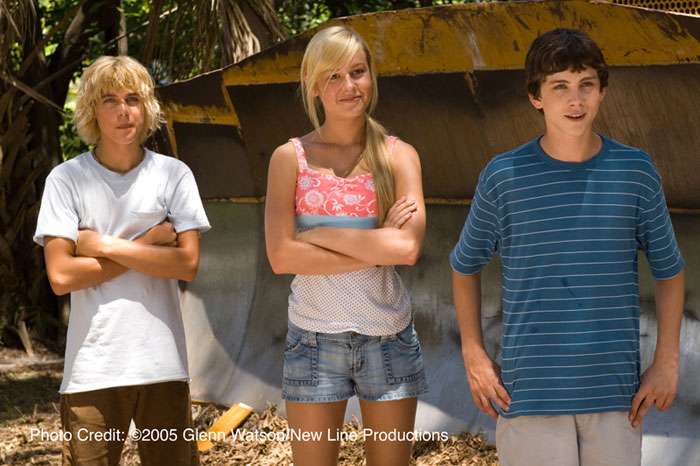 Roy Eberhardt (Logan Lerman, TV's "Jack & Bobby") has a difficult transition when his family moves from the mountains of Montana to the Florida coast. He's picked on by the school bully and draws the attention of an inept cop, Officer Delinko (Luke Wilson, "The Family Stone"). But an unlikely alliance with soccer jock Beatrice (Brie Larson, "13 Going On 30") and her homeless brother draws Roy into their environmental crusade. The pancake chain restaurant being built in town will destroy the nesting place of protected burrowing owls and Roy quickly learns that big business doesn't give a "Hoot."

Miami-based writer Carl Hiaasen's ("Strip Tease") first novel for kids has some really good lessons for kids at its core, but television director Wil Shriner ("Becker," "Frasier"), who adapted the novel, doesn't know how to pace a feature length film. Florida and its unique wildlife get their ample due, but watching "Hoot" is like slogging through quicksand. One of the biggest problems with "Hoot" is its adult characters. While Kiersten Warren ("13 Going On 30") and Neil Flynn ("Mean Girls") are fine as Roy's confused but loving parents, most of the adults (Tim Blake Nelson, Clark Gregg, Luke Wilson) play to the rafters, as if the under twenty set cannot digest naturalism. Another is that the comedy here is just so plain hokey - outdoor rat traps 'catch' a kid, a cop that dents his fender with each move of a seven point turn - that the film is squaresville rather than playing with the environmentally hip edge it should have. The kids are alright, although the invention of Mullet Fingers (Cody Linley, "Rebound"), a kind of bare-footed wild child, is a bit of a stretch. Lerman needs to shed "Bobby's" wide-eyed naivete, although it serves Roy here. Larson is the best of the bunch. Singer/songwriter Jimmy Buffet, who contributes five so-so songs here, gives a nice relaxed vibe as the kids' laid-back science teacher. "Hoot" is admirable for showing kids that grassroots efforts can succeed and that there are times when 'thinking like an outlaw' is justified. Its burrowing owls and respect for nature are cool too (although what environmentalist would put an alligator in a chemically treated port-o-potty?). Unfortunately, though, the message depends on its media and "Hoot" offers more tedium than entertainment.