Honk for Jesus.  Save Your Soul. 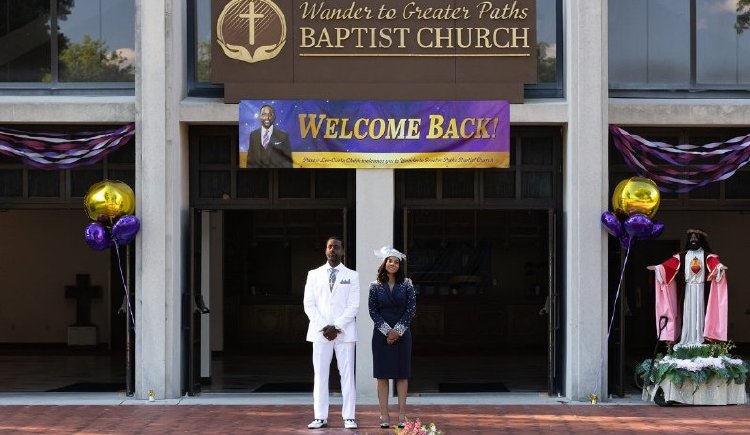 Pastor Lee-Curtis Childs (Sterling K. Brown) is feeling so confident that a settlement with the young male parishioners he had sexual relations with will clear the way for a rebirth of not only himself but his Wander to Greater Paths Baptist Church that he has engaged prize winning filmmaker Anita (Andrea Lang) to document the comeback.  But while his first lady, Trinitie Childs (Regina Hall), is all supportive smiles in public, in private she seems to realize nothing has changed in “Honk for Jesus.  Save Your Soul.”

Aren’t satires supposed to be funny?  Writer/director Adamma Ebo’s feature debut may have been intended as one, but this flat-footed mockumentary merely checks boxes it fails to mine for comedy or insights.  Regina Hall is really the only reason to see the film, the actress pulling gold nuggets out of thin air, her Trinitie a more self aware Tammy Faye Bakker.

While Lee-Curtis preens for the camera, Trinitie sees what she suspects an audience will, frequently calling for the non-responsive Anita to stop filming and trying to create cover when she doesn’t.  Inside their vast walk-in closet, the pastor suggests he needs something new for the Church’s relaunch, but Trinitie points out the Prada suits he already has in every color of the rainbow.  They admit ‘The Devout Five’ - Deacon and Deaconess Culpepper (Robert Yatta, Greta Marable Glenn), Sapphire Devaughn (Crystal Alicia Garrett), Sapphire’s show biz-aspiring daughter Aria (Selah Kimbro Jones) and Kensington Straterly (Perris Drew) – into the Church for a practice run.  Lee-Curtis’s ‘I’m a sinner’ sermon exalting marriage between a man and a woman ends with a strip tease, a prelude to his full body baptism during which he and Trinitie argue over the pronunciation of ‘Amen.’

But there will be real trouble in paradise when Trinitie pays a visit to Bathsheba’s Bonnets at the local mall and runs into former congregant Sister Denetta (Olivia D. Dawson), happy to relay the juicy news that the Childs’ former parishioners Keon and Shakura Sumpter (Conphidance, a sharp Nicole Beharie), who poached their congregation during their shutdown, plan to open their new, larger Heaven’s House Church on Easter Sunday as well.  The Childs pay a visit to the Sumpters to make a direct appeal and receive wide-eyed, well wishing pretense in return.

“Honk for Jesus.  Save Your Soul.” is a portrait of generational exploitation of black women (Trinitie’s mom advises her to stand by her man while admitting her own was problematic until the day he died).  When Trinitie tries to ignite some fire in the bedroom it turns into a one-sided sex act and Lee-Curtis strips his shirt whenever a handsome man is around, even attempting to seduce a member of Anita’s crew.  The film’s last act is a stinker, Lee-Curtis, not content with his wife acting as a roadside sign twirler advertising their reopening, forcing her to perform whitefaced minstrel.

The only purpose served by the film crew is to magnify the immensity of Lee-Curtis’s ego, Anita barely seen or heard.  It is difficult to ascertain the point Ebo is trying to make as the film merely goes through expected motions, spinning its wheels to an inevitable conclusion.  There is no subtext on televangelical grift, which is only apparent via the Childs’ material possessions.  Sterling K. Brown, more known for dramatic roles, is miscast here, Hall pulling both their weight with an able assist from costume designer Lorraine Coppin.  Save your money.

Pastor Lee-Curtis Childs (Sterling K. Brown) once had a congregation of tens of thousands with his First Lady, Trinitie (Rebecca Hall), leading the Wander to Greater Paths Baptist Church. Then, a huge scandal brought down his mega-church and the flock was lost. Not to be kept down, the couple plans a grand new reopening of their church and bringing back the flock in “Honk for Jesus. Save Your Soul.”

There is a good idea in this feature debut by Adamma Ebo (and twin Adanne Ebo) but, unfortunately, I think that idea was better realized in the original 2018 short film. In that short, the idea of an evangelical comeback was fully examined in about 15 minutes. This extended version of that simple story clocks in at 113 minutes.

I have seen a number of feature films that are a remake of the original short film and some succeed in expanding the material to full length quite successfully. That is definitely not the case with “Honk….” The filmmakers cover all the points made in the first short but that material is expanded to proportions that do not fit the story of hoped-for redemption.

There is forcedness to Sterling K. Brown’s preacher that felt false. For a man who is supposed to be repentant for his earlier alluded-to misdeeds, there is an inherent falseness in his character that the huckster cannot cover. My question as I watched the remake is: why would anyone believe and follow these people in the first place?

The biting satire of the original is lost amidst the Childs’ sense of entitlement and selfish opulence that, to them, is their god-given right, It is not.

Focus Features opens "Honk for Jesus. Save Your Soul." in theaters on 9/2/22.