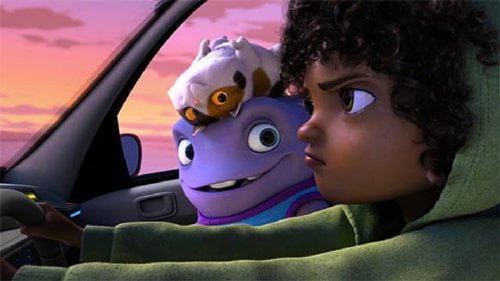 Threatened by the Gorg, Captain Smek (voice of Steve Martin) engages his most valued talent of running away and informs his fellow Boovs they will be settling planet Earth as soon as its human inhabitants have been resettled. But scorned outsider Oh (voice of 'The Big Bang Theory's' Jim Parsons) makes yet another mistake when he hits Send All on his 'warming of the house' party eVite, broadcasting the location of their new "Home."

An alien buddying up with a human child in a movie called "Home" may sound too much like "E.T.," but Oh isn't trying to get back to his kind but away from them and if his reasons are simplistic at film's start, by its end Oh will have delivered a nice message for kids on empathy and open mindedness. The film's starring vocal talents are both new to the medium and, surprisingly, singer Rihanna is more effective as Gratuity 'Tip' Tucci, the young girl inadvertently left behind by the Boov, than Parsons, who merely recycles Sheldon's vocal inflections and whose fractured English is too close to Yoda-speak. Martin's performance as the xenophobic martinet Smek is that of an indulged brat, perfect for his character. The squat, big eyed, tentacled Boov, normally purple, are emotional chameleons, turning yellow when scared, red when angry, blue when sad, and as Tip quickly susses, green when lying. Tip, who escaped the Boov suction transfer that took her mom Lucy (voice of Jennifer Lopez) on Christmas Day, runs into Oh hiding out in a convenience store and quickly traps him. When her mom's car will no longer start, though, Oh volunteers to fix it, transforming it into the Slushious, a flying vehicle powered by Slushy machines. Along with Tip's cat Pig, they set off to find 'my mom,' discovering they're more alike than looks would suggest along the way. Adapted from Adam Rex's 'The True Meaning of Smekday' by "Epic" writers Tom J. Astle and Matt Ember and directed by Tim Johnson ("Over the Hedge"), "Home" echoes lots of other films from "Wreck-It Ralph" to countless odd couple road movies and alien invasion flicks. Oh is even introduced much like "The Lego Movie's" Emmet Brickowoski, a perpetually upbeat creature who doesn't seem to get that no one wants to be around him (he gets his name from fellow Boovs' exasperated 'Oh's' when they see him). But the film's bright animation design featuring Boovian circles (their tentacle-like 'ears' look like Princess Leia buns curled at rest) is pleasing and visual sight gags, mostly derived from Smek's repurposing of human artifacts, amusing. The 3D photography adds little, even with many flying sequences. Musical choices are uninspired, although a sequence set to Stargate’s “Dancing in the Dark,” which makes Oh respond in spite of himself is charming. Grade: