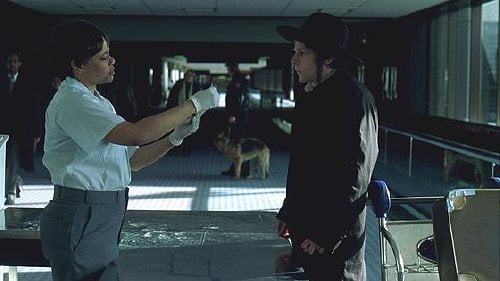 In 1998, a group of Hassidic Jews were recruited to smuggle 1 million ecstasy pills into the United States. First time director Kevin Asch tells their story through the eyes of Sam Gold (Jesse Eisenberg), a piously religious young man who is attracted to the glamour and excitement of smuggling in what he is told is just medicine not approved by the FDA. When he learns the truth that he is a illegal drug mule, Sam is too sucked into the narcotics underworld and all of its perks to give it up in “Holy Rollers.”

In Brooklyn's Hasidic Jewish community, Sam Gold (Jesse Eisenberg, "Adventureland," "Zombieland") is frustrated by his father Mendel's (Mark Ivanir) resistance to his innovative business ideas for the family owned fabric shop. He is struck another blow when he finds out he was rejected by the Lazar family as a husband for their daughter Zeldy (Stella Keitel, daughter of Harvey and Lorraine Bracco), and so when his best friend's older brother next door, Yosef (Justin Bartha, "The Hangover"), proposes they earn a little cash by transporting medicine from Europe, Sam jumps with Leon (Jason Fuchs) trailing behind. Innocence lost, Leon realizes the truth, but Sam is intoxicated by the quick cash and becomes one of ecstasy dealer Jackie Solomon's (Danny A. Abeckaser, "You Don't Mess with the Zohan") best "Holy Rollers." First time feature director Kevin Asch and screenwriter Antonio Macia developed this stranger-than-fiction true story, which took place in 1998, with producer Danny Abeckaser and while the novelty of the story itself maintains interest, the filmmakers have draped it over a too familiar framework. Film's last act is especially disappointing, waffling in indecision over just what point it wants to conclude on. Still, the collision of the familiar story of corruption followed by redemption intersecting with the Hasidic community and an intriguing performance by Bartha make "Holy Rollers" worth a look. One thing the filmmakers get right is conveying the insular innocence of the community they portray. When Sam and Leon fly to Amsterdam, Sam stacks airplane pillows against his armrest to prevent him from coming into physical contact with the female passenger seated next to him. Details like these not only make the film interesting, but help to explain how these two young men could have been so naive. On the flip side, it is never really made clear how Yosef could flaunt the rules of his faith so openly while living within the community. Eisenberg's Sam is notable because despite his early naivety, he is far from shy. We can see this early on, when he approaches his chaperoned 'date' with Zeldy with a confidence that clues us he has no doubt of her acceptance. When he first meets Solomon's girlfriend, Rachel (Ari Graynor, "Nick and Norah's Infinite Playlist," "Youth in Revolt"), he cockily jokes 'I didn't order a brunette.' Then, he goes one step farther, offering a shrewd evaluation of Solomon's possibilities using Hasids which undercuts Yosef's predominance and sets in motion the entire operation's eventual collapse. While scenes of Sam with his customary hat and forelocks grooving in a disco and playing lady killer are amusing for the extremity of their cultural clash, the film is actually at its best when it shows how Sam's behavior affects family life. His criminal behavior becomes an open secret (how is never explained - did Leon, who ditches the operation as soon as the truth emerges and who goes on to marry Zeldy, out his friend?) and when he buys the family a much needed new stove, he is astonished to find his ostracism complete. Sam's relationship with Rachel also works in an unexpected and strangely bittersweet turn and, with it, Graynor continues to build a varied filmography. Jesse's sister, the child star Hallie Kate Eisenberg ("Paulie"), has some brief moments here as Sam's sister Ruth. Still, for all its exotic content, "Holy Rollers" leaves us with too many blanks to leap across before it settles into something all too familiar. The movie leaves us with a series of title cards explaining what happened, then jumps back with a father-son prison scene to suggest healing reconciliation but which instead only underlines a lack of clarity.

Inspired by, instead of based on, true events in the late 90’s, “Holy Rollers is an insightful character study of a young man whose faith is sorely tested by the excitement of his job and its new found gains. Sam begins his career in the drug underworld innocently enough when Smiling Jack Solomon (Danny A. Abeckaser) recruits the gullible Jew to become a drug mule to smuggle “not yet approved” medicine into the US for wealthy clients. Sam’s first mission is to Amsterdam and things go off without a hitch. The exciting new world carries a lot of perks for the young men until the truth comes out. However, Sam is too deeply into his new “faith” and he sheds the last vestiges of Hasid life, creating, in the end, a moral dilemma for himself. Antonio Macia’s script smartly avoids the scrutiny that a “based on a true story” would have had. Using the events of the day instead, director Asch is able to create the underworld of drug smugglers as he and Macia see it. The result is an interesting look into two unknown-to-most worlds: The Hasidic and the international drug smuggling. Using Brooklyn and Amsterdam as backdrops, “Holy Rollers” shows the simplicity of life, on one hand, in the Hasid community and the complexity and dangers of the drug smugglers. Jesse Eisenberg is somewhat a one-note actor, always playing the same type, but the note works well here. Sam transitions from devoted Hasid to callous drug runner in a fine arc and he makes you sympathize with him. Jason Bartha does a solid job as the wily Yosef, older brother of Sam’s best friend Leon (Jason Fuchs), who brought Sam into the smugglers fold but soon resents him when Smiling Jack shows the new recruit favor. I like this exploration into the very different worlds of Sam. Kevin Asch shows a skilled hand that belies his tyro status. He moves the story along briskly and to the point and gets solid performances from his talented cast. This is a fine debut for the newcomer.