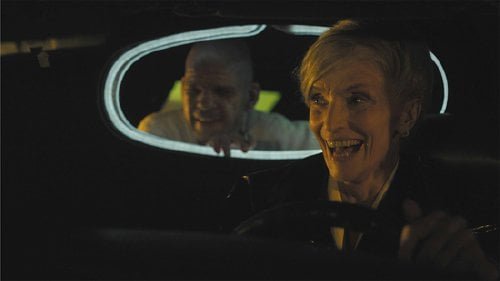 Monsieur Oscar (Denis Lavant) is a man of many talents. He is an industrialist, a banker, a musician, a motion capture artist, an assassin, a beggar, a family man and a monster and we follow this mysterious man over the course of his dawn to midnight day and his many appointments in Paris as he is driven around in a stretch limousine from “Holy Motors.”

Monsieur Oscar (Denis Lavant, "Beau Travail") awakens and pushes through a wall adorned with prints of trees to find a cinema audience looking away from him, towards a screen. He dresses, says goodbye to his daughter and gets into the white stretch limo that awaits him. His driver, Céline (Edith Scob, "Eyes Without a Face"), tells him he has nine appointments this day, many hours of work before she can return to "Holy Motors." Wow. With "Holy Motors," writer/director Leos Carax ("The Lovers on the Bridge") celebrates cinema and the art of acting like he's commenting on life itself. With Denis Lavant assuming Lon Chaney's 'Man of 1,000 Faces' mantle (the actor even shares the art of his own makeup applications), Carax has achieved what Martin McDonaugh attempted, but couldn't pull off in "Seven Psychopaths." But although this film is not without humor and left this viewer feeling rapturous, it's perspective is often bleak and the man holding the entire show on his shoulders is growing weary. Monsieur Oscar transforms himself into an old crone for his first 'appointment' begging on the streets of Paris, where he/she is ignored. His second appointment is one of the film's most eye-popping, as he acts for motion capture, doing acrobatic martial arts, running on an impossibly fast treadmill, then conjoining with a female counterpart so fluidly it recalls the opening of Fincher's "The Girl with the Dragon Tattoo." Significantly, they both disappear, replaced with the animation they are modelling. Carax gets self-reflective for Oscar's third outing where he reprises his role as a sewer dwelling troll who calls himself Merde. First seen in Carax's contribution to 2008's "Tokyo!" omnibus, this time around Merde interrupts a fashion shoot in Pere Lachaise cemetery where he's recruited to be the beast to the beauty, but instead kidnaps her (Eva Mendes) to make his own fashion statement (turning her couture into a burka) in an underground tableaux. Carax almost, just almost, fakes us out when Oscar then picks up his daughter Angèle (Jeanne Disson, "Tomboy") in an old beat up car, but she gets dropped off at a different home than the one he left that morning in finer apparel. But wait - that was yet another character, one he later confronts at the meeting place (Fouquet) we'd witnessed him making an appointment for. Later, as a thug out to kill another, the actor will not only play both roles, but turn the victim back into the killer. 'Sometimes one murder a day isn't enough,' he tells an increasingly concerned Céline. This is the first appointment after an Entr'acte (an exhilaratingly aggressive accordion parade led by Lavant in a dimly lit church), and indeed the tone of the film changes, becoming more inward, more personal. An old rich man has a death bed scene with his niece (Elise Lhomeau), then Oscar must rush off, telling the actress he'd like to work with her again. Céline worries that he's drinking without having eaten, that he's tiring, then she herself gets into a fender bender, allowing Oscar time to be himself - just when he spies former lover Jean (Australian pop star Kylie Minogue), herself with 20 minutes to spare before her appointment as Eva Grace, an air hostess living her last day on earth. These appointments are all layered with meaning, skipping across film genres. This chance meeting at the derelict La Samaritaine department store is musical tragedy. The store's once famous rooftop is overgrown, its mannequins tossed aside and broken, its sign, seen from behind, Paris's own Hollywood overlooking Carax's Pont Neuf of his "The Lovers on the Bridge." "Holy Motors" connects to many other films, with even the wall mural of the opening scene recalling "The Man Who Fell to Earth's" table tennis room. Carax's film is a cousin to "Synecdoche" and a modern response to Rivette's "Celine and Julie Go Boating." He even appears to have anticipated Cronenberg's "Cosmopolis," answering the questions set forth by Robert Pattinson as to where all the limos go at night (Holy Motors!). There is one last meeting, a return 'home' at its third address of the day and the family Oscar returns to is one of the film's best surprises. Then its Céline's turn, where Carax tips his hat to her most famous role before the fleet worry about their obsolescence. "Holy Motors" is simply breathtaking.