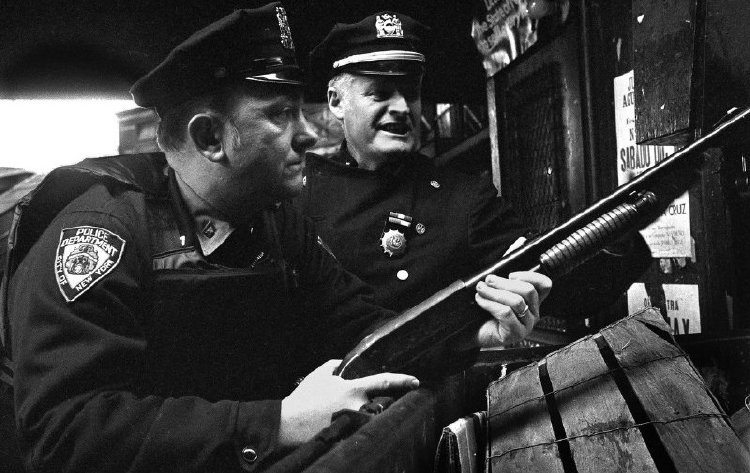 In 1973, four young Black Muslims entered a Brooklyn sporting goods store to steal rifles to protect their families after the police failed to help them with threats by the Nation of Islam.   A passerby called the NYPD who soon arrived en masse, the four robbers misidentified in the media as members of the Black Liberation Army.  Believing any attempt to surrender would result in their deaths, 23-year-old leader, MTA worker Shu’aib Raheem, took twelve hostages in what would become the longest standoff in NYC’s history.  The incident also became the first instance of hostage negotiation, a technique cops ridiculed but which proved effective.  Writer/director/editor Stefan Forbes ("Boogie Man: The Lee Atwater Story") looks at he case from multiple angles in “Hold Your Fire.”

It is no coincidence that Forbes notes such seminal NYC cases as the Attica prison riots and the inspiration behind “Dog Day Afternoon,” two events which took place in the two years prior to this one.  Not only does NYPD Captain Al Baker mention them as instances where police could learn from their mistakes, but the latter appears almost a blueprint for the suspense Forbes builds with his true story, aided by an exceptional amount of archival coverage and photojournalism.  But while the film is a gripping account of ill considered police training, racism and the radical move by disrespected NYPD Commissioner Patrick Murphy in allowing street-cop-with-a-psychology-PhD Harvey Schlossberg to try his ‘defuse and de-escalate’ approach, Forbes also leaves questions hanging.

Take, for example, the testimony here of Alan Alda lookalike Jerry Riccio, the owner of John and Al's Sporting Goods and one of the twelve hostages.  Riccio is quick to condemn the phalanx of police who all opened fire on his shop, their bullets whizzing past him at shoulder level.  He also testifies that, with one exception (the ‘little guy,’ loose cannon Mussidiq, who at one point held a gun to his head), these were not bad guys.  Yet a little research turns up accounts of him testifying at Raheem’s parole hearings, stating that he heard the man orchestrating the murder of the rookie cop who was killed and that he should not be freed until that patrolman could walk into his store whereas Raheem talks about friendly fire and ricocheting bullets.  Notably, the bullet that killed the 23 year-old officer was never matched to a gun via ballistics, but Forbes doesn’t tell us if all the weapons used from within the store were tested.

Forbes builds his story with testimony, frequently conflicting, from three separate angles – the perpetrators, represented by the paroled Raheem and still incarcerated Dawud Rahman; the hostages, represented by Riccio and Rosemary Catalano, a then teenaged customer; and the cops represented by the open-minded Baker and Sgt. Jack Cambria, less so.  The greatest difference in viewpoints between then and now comes from the police, some still openly racist in how they come to their conclusions.  Forbes’ historical recreation illustrates a situation that escalated wildly, Raheem recalling that an early attempt to surrender was foiled when they were confronted with a don’t move/drop your weapons conundrum.  The streets outside become a war zone with 150 police officers and a tank.  As in “Dog Day Afternoon,” the public masses behind barricades, many supportive of the men inside the store.

Forbes is at his most even keeled when getting to the core of his documentary, the introduction of communicating with the hostage takers in order to save lives on all sides.  Raheem declares that he wanted to speak to police, yet when a walkie talkie was thrown in front of the store it was rendered useless by the impact and when they threw it out again, their action was misinterpreted.

But Murphy, whom his own cops considered a pantywaist because he hadn’t come up from their ranks, got not only Schlossberg, but the Attica defense attorney and NYPD Commissioner Ben Ward, a Black man, involved.  A yes/no system was set up using the store’s lights.  Notably, when a hostage release was requested, Raheem chose the most frightened, a young Black woman, but she refused to leave, too terrified of the police outside.  But Schlossberg’s theory proved sound.  It is astounding to consider that after 47 hours of chaos, Riccio and his employee Cleve, a Black man, exited the store from a rooftop hatch safely while Riccio was holding a weapon retrieved from his desk because police held their fire.

“Hold Your Fire” is a gripping account of a landmark police confrontation with armed hostage takers that has been mostly lost to history.  But while one can appreciate Forbes trusting his audience to parse conflicting testimony, one also wishes more facts were provided to answer some obvious questions.