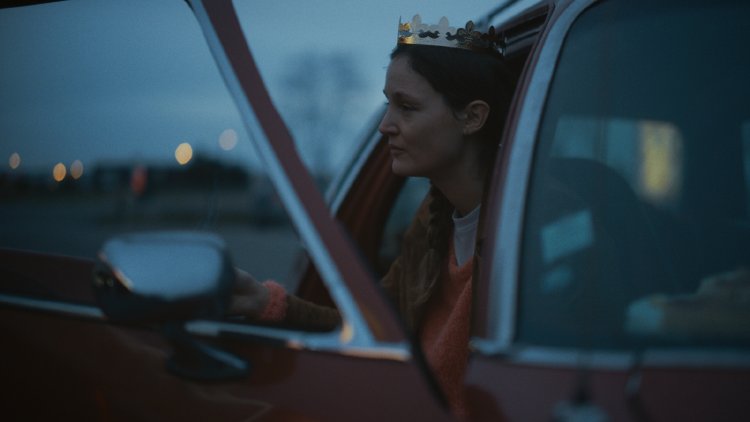 One dawn, Clarisse ("The Phantom Thread's" Vicky Krieps) slips out of the bed she shares with her husband Marc (Arieh Worthalter), checks on her sleeping children Lucie (Anne-Sophie Bowen-Chatet, Julilette Benveniste as adolescent) and Paul (Sacha Ardilly, Aurèle Grzesik as adolescent) and drives off in her red 1979 AMC Pacer.  She stops at a gas station telling the friend (Aurélia Petit) who will check out her car that she wants to see the sea.  Just why Clarisse has abandoned the family she so clearly misses is the mystery of “Hold Me Tight.”

In adapting Claudine Galea's unproduced play 'Je Reviens de Loin,’ French actor Mathieu Amalric impresses behind the camera, multiple timelines and locations melting into one another via match cuts as sound is both overlaid and bleeds from one scene to the next, both devices illustrating Clarisse’s psychic connection to her family.  Almaric’s use of music is inspired, from Clarisse singing along to J.J. Cale’s ‘Cherry’ as she drives to her daughter’s piano performance of György Ligeti's Musica ricercata: No. 1, Sostenuto.  Krieps digs deep to portray a range of emotions from the joy of freedom to the desire for the touch of a lover’s skin to a keening sense of loss during her mind and time tripping journey.  The haunting “Hold Me Tight” will linger.

I have known, for many tears, Mathieu Amalric as an excellent and prolific actor – just watch Julian Schnabel’s “The Diving Bell and the Butterfly (2007).” He also, it turns out, likes to write and direct films. And that he does, here, with his adaptation of Claudine Galea’s play, “Je reviens de loin.” Be prepared to think and be challenged by “Hold Me Tight.”

Claudine (Vicky Krieps) walks out on her family – husband Marc (Arieh Worthalter) and their two kids, Lucie (Anne-Sophie Bowen-Chatet) and Paul (Sacha Ardilly) – without a word and gets into her vintage AMC Pacer and drives away. We do not know why and director Amalric gives us tantalizing clues as her story “plays” out. Do not bother to try and, instead, watch “Hold Me Tight” without “figuring out” what is going on.

If you do, you will get a highly effective character study of a woman who holds a secret from us and, perhaps, from herself. She seems to be eking out a new existence without her family. Why she does this is given to us in carefully metered portions, making us build assumptions and make guesses about her life.
The other half of “Hold Me Tight,” centers on the family she left behind. Or, is it? That is one of the beauties of this film. It gives you the chance to guess what is going on, but only a chance.

Kino Lorber releases “Hold Me Tight” in select theaters on 9/9/22.  It is the closing night film of Boston’s Museum of Fine Arts’ French Film Festival running from 8/18-8/21/22.