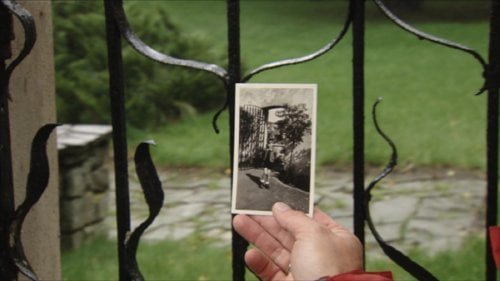 Some of Adolph Hitler’s most infamous henchmen were Hermann Goering, Heinrich Himmler. Hans Frank, Amon Goeth and Rudolph Hoess. We think of these men as monsters but they were family men, too. First time documentary feature filmmaker Chanoch Zeevi visits the children and grandchildren of these evil men and we learn the thoughts and feelings of “Hitler’s Children.”

The German people as a whole have long dealt with the shadow of Nazi guilt, but imagine if your last name was Goering or Himmler or Hoess? Writer/director Chanoch Zeevi visits the grand-nieces, daughters, sons and a grandson of five of the most notorious Nazi war criminals to see how they cope with their family history as "Hitler's Children." Zeevi not only has found himself five incredible subjects, but he's woven his film together so that their experiences and opinions are studies in contrasts and commonalities. The film begins with Bettina Goering, the attractive blond great-niece of Hitler's second in command, Herman Goering. She lives 'off the grid' outside of Santa Fe, New Mexico, trying to escape from the past, yet she's last seen celebrating German traditions, homesick. Another grand niece, Katrin Himmler, descendant of Henrich, the man considered the architect of the Holocaust itself, appears to be the most well adjusted. She's written a book on this subject which has, sadly, cost her relationships with many of her family, but she seems to have mostly expunged a sense of personal guilt. She's even married to a Jewish descendant of the camps. Katrin makes the observation that there is no achieving a balance with Nazi family history - one either runs from it, like Bettina, or one pretends it doesn't exist, like many of those relatives who no longer speak to her - yet she is the exception. Niklas Frank is the son of Hans Frank (and godson of Adolf), the man Hitler put in charge of Poland where he was responsible for mass exterminations. Niklas has also written a book in which he denounces his parents. He spends his days traveling around to schools and other institutions, where he believes he shocks his audience by breaking, with gusto, the commandment about honoring one's parents. Some of his childhood recollections are chilling, as is the story of his own divided siblings. One sister moved to South Africa because 'she liked Apartheid.' (On a personal note, my German father, an unrelated (to the best of my knowledge anyway) Frank, was awfully nervous when we crossed from Germany into Czechoslovakia in 1980 because of our last names.) Rainer Hoess has eerie memories too, but they're passed down by his father and from family photographs which show his dad as a young child living beside the Auschwitz concentration camp in oblivion. Rainer's grandfather was Rudolph, the SS-Obersturmbannführer of Auschwitz and he travels with journalist Yael Bedarshi, the film's narrator, to the camp for the first time. The man breaks down standing in the very same places his father and grandfather were in those family photos, separated from unspeakable horror only by a wrought iron gate. Later, he meets with a Jewish group who have also come to the camp and a healing session results, although Bedarshi isn't moved, believing amends have been made too quickly. The film's most tragic figure, though, is Monika Goeth, the daughter of Amon who was the commander of the Plaszów camp in Poland (he was played by Ralph Fiennes in "Schindler's List"). Monika asked questions as a child and her mother deflected them. She innocently told a young Jewish man she was romantically interested in who her father was after learning he had been at Plaszów too. When Spielberg's film was released, she went alone to see it and could not believe what she was witnessing. Monika Goeth seems to have just about lost her mind because of who her father was. Although Himmler and Goeth are presented in talking head fashion, Zeevi keeps his film visually interesting by following his three other subjects around their homes and in their travels. He doesn't lean on archival material, except as presented by his own subjects, which makes "Hitler's Children" a very personal film about an evil so widespread its progeny are still struggling to to make sense out of it.

Tyro helmer Zeevi interviews the members of the families of the above-named henchmen. Bettina Goering, grand-niece of Herman, tells how she and her sibling submitted to voluntary sterilization rather than spread the genes of her war criminal great uncle. Katrin Himmler, grand-niece of former chicken farmer Heinrich, spent years trying to lose her German identity out of shame for her great uncle. Monika Goeth, the daughter of Amon Goeth, the monster of the Plaszow Concentration Camp, talks about the man made world infamous in Steven Spielberg’s “Schindler’s List.” Niklas Frank, son of Hans Frank, the Polish Governor General during WW2 responsible for the Jewish ghettos and concentration camps in that country, freely gives talks to young people about his father and the crimes he committed and warns of the possibility of a new Reich. Finally, Rainer Hoess, grandson of Auschwitz Concentration Camp commandant Rudolph, lectures about Nazi Germany and his grandfather and growing up next door to the death camp. Zeevi does a solid job in garnering the thoughts and feelings of the children and children’s children of the monsters of the Third Reich and architects of the Holocaust. The interviewees discuss the difficulties in coping with the deeds of their notorious forebears and growing up in the shadows of the horrors they perpetrated on mankind. It is a never ending process for these children of Hitler to assuage the inherent guilt of their birth. We get to know these people and the grief and guilt that they live with daily. “Hitler’s Children” is an original study of the Holocaust and is also a cautionary statement of the dangers of the rise of a new fascism.