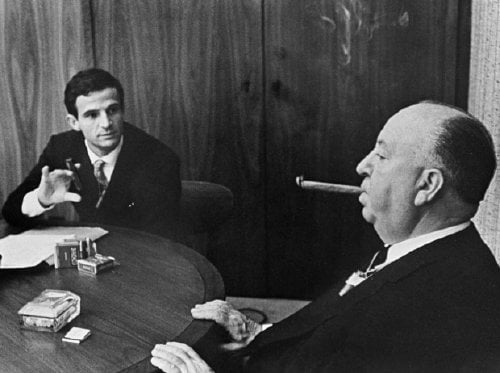 In 1966, Francois Truffaut published the definitive book on the works of his idol in Cinema According to Hitchcock, describing both the master’s films and the influence they would have on future generations of filmmakers. Director Kent Jones assembles archival footage of the titular pair plus talking head interviews with directors and filmmakers from around the world in “Hitchcock/Truffaut.”

Cowriter (with former 'Cahiers du Cinema's Serge Toubiana)/director Kent Jones ("A Letter to Elia") documents the creation of the book by French director Francois Truffaut that finally acknowledged Alfred Hitchcock as more than a director of commercial entertainments. With assists by such current filmmakers as David Fincher, Wes Anderson, Peter Bogdanovich, James Gray, Kiyoshi Kurosawa, Richard Linklater, Paul Schrader, Arnaud Desplechin and Martin Scorsese, this highly entertaining documentary combines personal anecdotes about Hitchcock's influence with film analysis and the mechanics behind Truffaut's 'Hitchcock/Truffaut.' Fincher's dad had a copy and Wes Anderson's has been so well perused, it's held together by a rubber band. Gray notes its unpretentiousness while Schrader says it was one of the first to discuss filmmaking craft. Jones uses original storyboards, footage of the interviews themselves (where the two directors were joined by a matronly interpreter), countless film clips and old promotional reels, one astonishing one for "The Birds" featuring Hitch with Hedren, a live crow perched on her shoulder! The Cahiers du Cinema crew are referenced, articles having been written by the man known as the 'French Hitchcock,' Claude Chabrol. Truffaut's exploratory letters played to Hitch's ego, but the young and old directors appear to have enjoyed each other's company, maintaining contact until Hitch's death, Truffaut following a mere four years later at the age of 52. Truffaut's question about suspense often being mistaken for fear is gamely played by Hitch using an unlikely example from his early "Easy Virtue." The subject of control versus improvisation offers interesting insights, as does an analysis of Hitchcock's use of rear projection and film as the expansion and contraction of time. Fincher discusses the personal aspect of filmmaking, noting that Hitchcock's best films were the one that had a direct connection to his subconscious. There's also a rather titillating anecdote concerning Jimmy Stewart during the making of "Vertigo." "Hitchcock/Truffaut" will delight any film buff or anyone who's ever seen a goodly share of Hitchcock's films. It's a quick moving, thoroughly absorbing film class that never bogs down in academia. Grade:

The film (and the 1966 book) is based on the 1962 interviews by Truffaut over an eight day period with Maestro Alfred. With “Hitchcock/Truffaut,” filmmaker Jones adds the additional layers of comment and analysis from the likes of, to mention just a few, Martin Scorsese, Paul Schrader, Wes Anderson, Olivier Assayas, Peter Bogdonovich and David Fincher. It is a treasure trove of information and analysis on one of my all-time favorite film directors. These analyses, alone, have enough depth for a film of its own about Hitch. Add to this the interactions between the older and younger auteur and their insightful views on how their films are made and we get a complete package. Anyone who loves movies and things about movies will thoroughly enjoy “Hitchcock/Truffaut.”