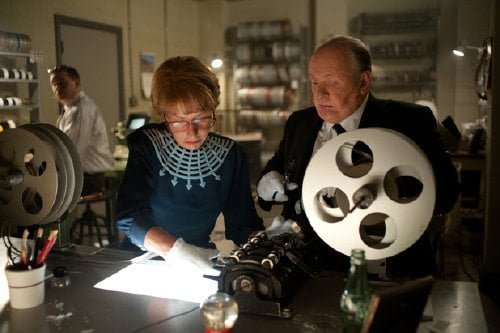 At the peak of his career, British director Alfred Hitchcock (Anthony Hopkins), the master of suspense, had a desire to switch things up. He became fascinated with the real life grue in the story of Ed Gein (Michael Wincott, "The Crow"), the Wisconsin farmer who kept his mother's decomposing body and killed, skinned and hung other women like game. When Robert Bloch fictionalized the tale in his book "Psycho," Hitch bought the rights and when Paramount Pictures refused to finance it, the director mortgaged his house. But the man wasn't expecting his personal life to be switched up too, so when his wife, Alma Reville (Helen Mirren), chose this moment to go off and write with another man, it threw more than finances out of whack for "Hitchcock."

If HBO's dark 'The Girl' was about Alfred disillusioned in his romantic yearnings, Fox Searchlight's far lighter "Hitchcock" is its flip side. These married filmmakers were, it turns out, jealous of rivals who actually had no interest in their partners. It was the fact that these closest of filmmaking collaberators felt the need to look elsewhere for sexual gratification which ended up hurting them both. But if we're to believe director Sacha Gervasi ("Anvil: The Story of Anvil") and screenwriter John J. McLaughlin's ("Black Swan") adaptation of Stephen Rebello's book, the struggles to make "Psycho" forever implanted in Hitch his need for Alma and satisfied her need for his recognition. This, as anyone who's read about Hitch's Tippi Hedren obsession, is a fairy tale ending indeed. The film is entertaining on a surface level, serving up equal portions of marital melodrama and Hitch's dry and impish wit, but anyone looking for a serious biopic should look elsewhere. We get this from an opening that has Hitch in the tub spying on his wife getting dressed. Sure this sets up his inner peeping Tom, but Helen Mirren is widely acknowledged as the industry's sexiest sixtysomething actress, something which could not be said for the real Alma (Imelda Staunton would have perhaps been better physical casting). But then we're off with Hitch's contemplation of his next work - 'What if someone really good made a horror picture?' he asks when Bloch's book is dismissed as claptrap. When he gets pushback from the studio for which he's made millions, it's deliciously ironic when Hitch tells his agent Lew Wasserman (Michael Stuhlbarg, "A Serious Man," HBO's 'Boardwalk Empire') that maybe the studio execs view him now as 'damaged goods' for his television work when today he seems most prescient, not only working in the medium but in developing a brand in the first place. Then there are his marketing instincts, such as when he instructs his assistant Peggy Robertson (Toni Collette) to buy up all the copies of Bloch's book to keep the ending secret and when he invites the press in to announce the production, distributing disturbing crime scene photos and his ghoulish drollery. Meanwhile Alma is working with Whitfield Cook (Danny Huston, "The Constant Gardener," "Wrath of the Titans "), one of the writers on the unsuccessful "Stage Fright," adapting his work in a romantic, secluded beach house and his attentions have turned her head, evidenced by the sexy new red bathing suit she buys despite its price tag. Hitch notes the flirtation yet fails to see the root cause, even as he buddies up to his new, Alma-found star Janet Leigh (Scarlett Johansson, surprisingly good here despite looking always like no one other than Scarlett Johansson). Hopkins does a great Hitchcock impression while also conjuring up an inner life for the man, but the film itself keeps him from going disturbingly deep, despite the good idea of using Gein himself as the conduit to the man's darker instincts. Mirren cannot help the fact that she's too dishy for her role and charges forward carving out a strong career woman who nonetheless chooses to stand in her husband's shadow. She's got one strong scene where she verbally puts her husband right in his place. Collette is her strictly business alter ego and gives the slightly tongue-in-cheek yet no nonsense performance her director's obviously called for. James D'Arcy, who was my favorite thing about the misguided "Cloud Atlas," is spot on perfection as Anthony Perkins, whose sexual orientation is used here for jokey innuendos. Unlike Johansson, Jessica Biel ("The Illusionist") in a wig feels too modern as Vera Miles. In a small role, the original "Karate Kid's" Ralph Macchio scores a good laugh as screenwriter Joseph Stefano. But there are a few things that keep "Hitchcock" from rising above solid entertainment into something more along the realm of art. Mirren's obvious appeal has already been noted. The Hitchcocks' daughter, Pat, who featured in much of the couple's work on screens big and small, is barely mentioned. Finally, considering that the film was adapted from Stephen Rebello's "Alfred Hitchcock and the Making of Psycho," the movie only gives us a highlights reel of the actual production - the self-financing distribution deal made with Wasserman, the comedy of dealing with the censors, the famous shower scene and a couple of minor bits for background. Alma's importance in turning the project around by spurring Hitch's marketing genius is played more for the rebound of the relationship than the movie itself. Those who really want to know about the making of "Psycho" beyond Alma's insistence on using Herrmann's score for the shower scene and snipping a post-murder Leigh blink will still need to read the book. Gervasi doesn't go all in for Hitchcock style references within his own film except for the occasional famous silhouette and a few birds. Production design and art direction provide a period Hollywood gloss, especially in the fastidiously kept Hitchcock home with its well-stocked fridge. "Hitchcock" may not be a weighty take on its subject, but the script is full of well-earned laughs, including one of the best closing lines of the year.