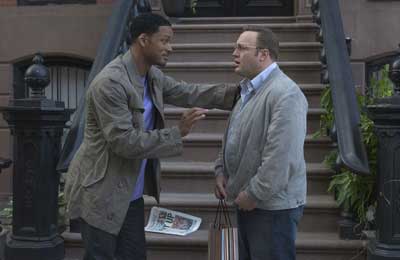 Alex Hitchins (Will Smith) is surreptitiously known on Manhattan as the "Date Doctor." His secretive consulting business trains love starved men on how to get a date with the woman of their dreams and make that first kiss their last first kiss. But, his lucrative business is in danger when gossip columnist, Sarah Melas (Eva Mendez), gets some bad info on the man, hunts him down and threatens to destroy lonely men's only hope for happiness in "Hitch."

Will Smith's career, over the past few years, has become synonymous with the word "action" - such adrenaline busters as "I, Robot," "Bad Boys," "Men in Black," "Enemy of the State" and, of course, "Independence Day" are what the actor has become best known for. But, the Smith's roots - TV's "The Fresh Prince of Bel-Air" - are comedy bound and, with his easygoing and likable manner, ideal for a romantic comedy like "Hitch." We first meet Alex Hitchins by way of a montage collection of three of his clients as they go against their inner nature - screwing up their love lives by doing exactly the wrong thing on a date - listen to the "Doctor's" advice and sweep the women they love off their feet. The only requirement posed by Hitch is that each man must be in love with the woman of his dreams. As we watch, each guy takes the training offered by Hitch to heart and, lo and behold, he woos his true love and they live happily ever after. Hitch faces his greatest challenge as the Date Doctor when he is approached by Albert Brennaman (Kevin James), a chunky-monkey of an accountant with a huge crush on his company's most important client, Allegra Cole (Amber Valletta). Shy and lacking self-esteem, Albert hires Hitch to make his love life right. The "doctor" doesn't know it, yet, but Albert is going to be his biggest challenge ever. Things get complicated, very complicated, when beautiful gossip columnist Sarah learns that her best friend was the victim of a one-night-stand by a selfish guy claiming to be coached by Hitch. Sarah sets the wheels in motion to destroy the love consultant. Meanwhile, Hitch sees the pretty journo and sets his own cap for Sarah's attentions. Sarah is unaware that Hitch is the target for her expose. "Hitch" turns out to be a pleasant surprise for a winter doldrums movie. It is a well-written, nicely paced romantic comedy that puts the accent on comedy. Will Smith is first among equals in the ensemble cast with a screenplay by Kevin Bisch that tells several stories and deftly intertwines them. First, of course, is the story of the Date Doctor and his humanitarian efforts to help Manhattan's neediest guys find love and happiness. Hitch was jilted by his own first "true love" years before and vowed to help the helpless whenever he can. That he makes a really good living out of his chosen vocation is just icing on the cake. When Albert hires Hitch to help him romance the beautiful Allegra, we see the lengths the consultant goes to train his client. Albert's ingrained nerdiness makes Hitch's job all the more difficult, especially when the doctor is distracted by the very appealing Sarah who, in turn, is hunting to expose the date consultant as a sexist charlatan. These several stories form a funny tapestry that is well woven by helmer Andy Tennant. Will Smith doesn't hog the camera as the titular character and gives his costars equal shrift. Kevin James, of TV's "King of Queens" makes his big screen debut and does a superb job in giving Albert dimension and substance in a funny, physical comedy role. Eva Mendez is smart, self assured and sexy as journo Sarah as she gradually drops her self imposed barriers and learns about love while she hunts down the erroneously maligned Hitch. Supermodel Amber Valletta is a pleasant surprise as the object of Albert's secret desire, coming across believably as a beautiful woman who sees Albert for what he is, though cleaned up and polished by Hitch. The beauty and the beast matching makes perfect sense. Techs are first class with some 74 different Manhattan locations, some tres trendy, used as the backdrop for this modern day fable of a man who just wants to make people happy. Soundtrack is an eclectic collection of tunes including songs by Sam Cook, Jimmy Cliff, Martha Reeves & the Vandellas, The O'Jays, Stevie Wonder and lots of contempo stuff, too. Humor kudos go to the film's makeup artists for an Elephant Man moment involving Hitch and seafood. Will Albert get the girl? Will Hitch lose his successful business? Will Sarah get her scoop? Do food allergies suck? Go see "Hitch" and find out. I don't think you'll be disappointed.