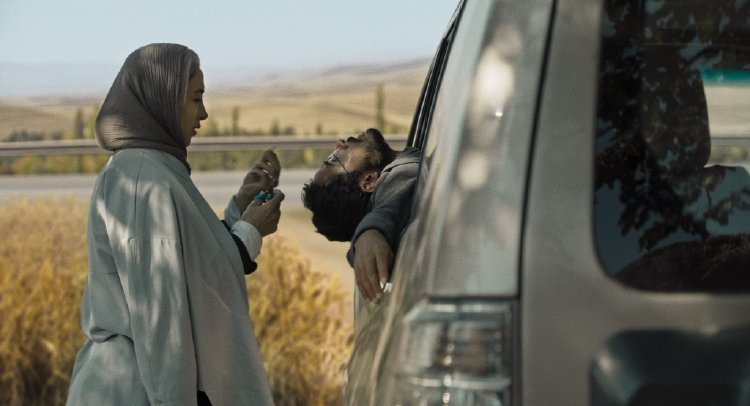 A family of four travels by car, dad Khosro (Hassan Majnooni, "Pig"), his leg in a cast, in the back seat with his rambunctious 6 year-old son (Rayan Sarlak) with his twentysomething son Farid (Amin Simiar) driving and his wife (Pantea Panahiha) riding shotgun.  The uncontrollable but undeniably entertaining child objects to having a forbidden cell phone taken away and hidden amongst some stones, the reason why, having to do with the reason for their journey, hidden from him in “Hit the Road.”

After growing up on the movie sets of Abbas Kiarostami, then his father Jafar, writer/director Panah Panahi makes his feature film debut with that most Iranian of locations – the interior of a car.  This will be one that makes frequent stops, however, as well as one which traverses a variety of Iranian landscapes, as we gradually come to understand that the family is travelling to the border to meet a man who will get Farid out of the country.  Panahi’s gradual disclosure of just why this family is on the road works alongside his measured tone, one which leans on familial dynamics ranging from humor to fear, with sprinklings of sentiment, resentment and everything in between.

Cinematographer Amin Jafari ("3 Faces") gives us a lengthwise view of the vehicle’s interior, cutting to back and front seat POVs, and the four actors within all express something different.  Khosro is a bit put upon by all his young son’s shenanigans, but generally laid back and open minded.  His wife tries to maintain an upbeat atmosphere, but also quietly vents about her husband’s inability to help.  Farid is a picture of tension, his worries boiling over as accusations that his mother is treating him like a child.  The scene stealer here, though, is Rayan Sarlak, a child whose constant motion and continual nattering would get on anyone’s nerves.  But he is also hilarious, claiming he needs his cell, for example, in case the neighbor’s daughter who he intends to marry is trying to get in touch with him.

There is also a surprise revealed when the young boy suddenly checks the back hatch area and we learn the family is also traveling with an adorable dog, Jessy.  Jessy will add additional drama, revealed to be a stray dad brought home for his son, later revealed to be dying of an infection, something Khosro was supposed to have dealt with but bungled.

Last minute directions before the final meeting spot cause more grief, until mom flags down a friendly bus driver, who not only agrees to lead them to their destination, but is unconcerned when their boisterous child boards his vehicle (‘the poor people on that bus’).  Panahi alternates going in close, for a couple of father and son conversations, one a fantastical reverie inspired by “2001” while “Batman” is discussed, with long shots where figures on a horizon can be heard discussing plans we never fully understand.  The film’s conclusion features one of its renditions of an Iranian folk song pantomimed by Sarlak in a desert, a second, unexpected goodbye for the young boy.

“Hit the Road” begins in joyful chaos, emotions becoming bumpier as it makes its way toward uncertain destinations.  While those bumps are occasionally reflected by the film itself as well, Panahi’s family is authentic as are this filmmaker’s bona fides.

Writer-director Panah Panahi follows in his dad, Jafar’s, filmmaking footsteps with a story that is a bit deceptive in what it is about. At first, it seems to be about a family going off on a holiday journey across the wild land of Iran as they “Hit the Road.”

The idea of a holiday is set up quickly by the enthusiastic chatter of Little Brother (Rayan Sarlak), almost non-stop, giving us the impression of festivities. Dad (Hasan Majuni) has broken leg and is cynical and complains about everything, especially their sick dog that he brought home. Mom, the stoic of the family, spends her time policing her volatile family. Only Big Brother (Amin Simiar) remains quiet as the driver for their journey.

Eventually, you find out the family’s intent and their eventual destination. It is not the “holiday” we were led to believe but something far more sinister and smacks of survival. My realization of what is happening occurs as the subtle writing and dialog by the director deftly leads me along the family’s way.

While the family dynamics of the trip play out and the story’s intent becomes clear – all very serious stuff – is tempered by the constant jumble of questions, comments and observations by Little Brother as the journey progresses from start to finish. There is a happy/sadness to this family story and Panahi does the job with deft skill.