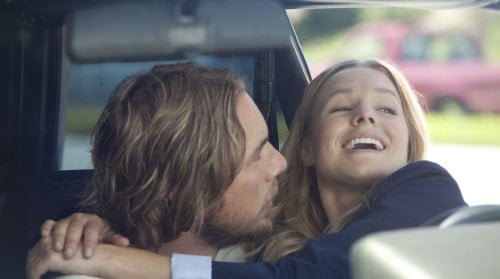 Former getaway driver Charlie Bronson (Dax Shepard, TV's 'Parenthood') just wants to give his girlfriend Annie (Kristen Bell, "Big Miracle") a ride to L.A.. Problem is, he needs to break out of the Witness Protection Program in order to do it and his agent, Randy (Tom Arnold), is not happy. Neither is Annie's ex, Gil (Michael Rosenbaum, TV's 'Smallville') who thinks she's in danger after running down Charlie's true identity and contacting his former criminal cohort, Alex Dimitri (Bradley Cooper), over Facebook. Throw in Gil's gay cop brother (Jess Rowland) and his Pounce app and everybody's crissing and double-crossing on the way to L.A. in "Hit and Run."

On screen chemistry with real life couples is as hit and miss as any star pairing, but Dax Shepard and Kristen Bell, engaged in real life, have it in abundance. Writer/codirector (with his "Brother's Justice" partner David Palmer) Shepard has a knack for applying stylish flourishes to genre fare, but he's not as strong combining genres. The underlying love story here, one which posits that we fall in love with the here-and-now rather than a person's past, is far stronger than the chaotic road chase which encompasses it. The film begins with pillow talk between the obviously besotted Charlie and the lovely playful Annie. Their life in an out of the way Northern California town seems ideal. Then Annie gets served an ultimatum from her boss, Debbie (Kristin Chenoweth) - either go on an interview for her dream job, which would establish the first academic department in the country in her specialty of non-violent conflict resolution, or lose the one she has which Debbie has deemed not good enough for her. There is a catch, of course. The dream job is in L.A., the exact location Charlie is in hiding from. Charlie is determined that he not stand in Annie's way and says he will break free of the program and go and he is going to take her there in his 1967 customized 700 hp Lincoln Continental, a car she thought didn't run. Annie's going to find out Charlie's gilded the lily on more than his car. There will be four different groups on their tail and the set up is too obvious, some characters painted too broadly. Randy is introduced as a complete incompetent, losing control of his vehicle in the path of two little girls playing. He talks about his extensive training handling firearms but it would be safer to be in a tank with a great white than around him with a loaded gun. Charlie and Annie must stop at Gil's in order to get back her teaching certificate and he obviously both wants her back and thinks Charlie is evil incarnate. What better man to allow access to the expired license plate of the car used in bank robberies than a man with a mission and a cop for a brother? That would be Terry, who is introduced explaining to his partner Angela (Carly Hatter) how an app on his phone allows him to pinpoint other gay men looking for a hookup (you can see where this is headed). Last but not least is Charlie's former best friend, Alex, whose introduction is one of the film's better conceptions, a scene which defines a guy whose looks are extremely deceiving. Alex wants revenge for the testimony Charlie gave to keep Nev (Shepard's 'Parenthood' fiancee Joy Bryant), now his own moll, out of prison. A third member of the old gang is barely a character except for the fact that he's always in a suit. As the trip progresses, Annie learns more and more about the man she loves, including the fact that his name isn't Charlie at all. But almost everything that happens is pushed too far and, like Annie's academic speciality, over-rigged for context, or the milking of a motel senior sex party. There are lots of flashy car chases (and one inexplicably goofy one in a parking lot) and Shepard and Palmer know how to stage them. Techniques like slo-mo aren't overused, applied just at the right time. The film's soundtrack is nicely thought out. "Hit and Run" would have made a great drive-in date movie with its gearhead road tripping and sweetly romantic antihero. It's uneven, but its good nature and friends-making-a-movie vibe is more winning than not.