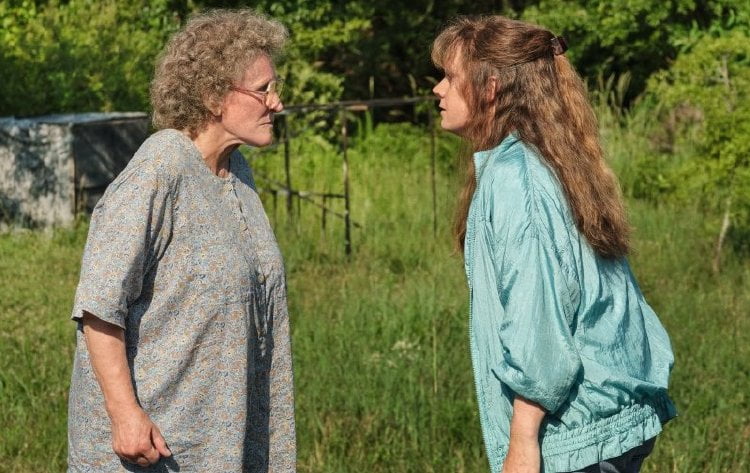 As a young teen, J.D. Vance (Owen Asztalos as a child, Gabriel Basso as an adult) rescues a turtle with a cracked shell, telling us how much he adored the hollers of Jackson, Kentucky where he spent his summers.  But his Papaw  (Bo Hopkins) and Mamaw (Glenn Close) ‘chased a dream’ up Route 23 to resettle in Middleton, Ohio, a rust belt town where jobs have dried up along with poor people’s hope.  J.D. recalls his bumpy transition into Yale while his mother Bev (Amy Adams) succumbs to a heroin addiction in his “Hillbilly Elegy.”

The 2016 book which many turned to as an explanation for Trumpism has been turned into a contradictory and culturally bland adaptation by "The Shape of Water's" Vanessa Taylor.  Director Ron Howard delivers a typically solid production featuring a few fine performances, but his film fails to identify the specificity of hillbilly culture which contributes to his characters’ fates nor is it an elegy - before we are even past the film’s opening narration, life in Jackson has already been depicted as cruel and bullying.

So this opening lament for a lost way of life which ends with our narrator being held underwater by a group of laughing boys wraps with a family caravan all heading back to Ohio.  As Bev bosses everyone around, her mother, Mamaw, is introduced saluting with her middle finger and telling her daughter to ‘sit and swivel’ and you may laugh with a jolt of recognition when you realize this is Glenn Close.  In Ohio, where J.D. informs us they ‘were different somehow,’ we are treated to a golden hued flashback of Bev crying as violins dominate Hans Zimmer’s score to accompany the present day news that she has OD’ed on heroin, news J.D. receives from his sister Lindsay (Haley Bennett) as he sits in a job interview, his chance to break free being strangled by a plea to return home.

The film continues in this vein, J.D. bristling at the stereotypes thrown his way by law professors he’s just reeled in with his connection to the Hatfield McCoy history.  Bev, who appears to be an undiagnosed manic depressive, is alternately a loving, affectionate mom and a shrieking, scary mess.  Mamaw, who essentially raised and protects J.D., will also defend her daughter, telling him that she had it worse that he ever had as we flash back to a scene of Bev as a child observing her mother contending with her drunk abusive father.  This one scene is all Howard really gives us to explain her descent into heroin addiction and we’ve seen J.D. experience far worse, like his mother speeding along a road threatening to crash the car and kill them both.

Despite solid performances from the transformative Close and a sympathetic Basso, Howard’s “Hillbilly Elegy” plays like any story of a poor, dysfunctional family.  There are a few references to being ‘proud hill people,’ but little cultural explanation for hillbilly pride.  The film’s timeline is so fractured, we are given flashes of character rather than flashes of insight into what has formed them.  Similarly, the economic trends which have led to rust belt grievance are summed up in shallow asides.  One line of dialogue is given to J.D.’s success in making it to Yale (he enlisted with the Marines) and his Asian American girlfriend Usha (Freida Pinto) has no purpose other than as comfort or sounding board at the other end of a phone and an excuse for a bit of Mamaw wisdom (‘They’re called Indians, like the Cleveland Indians, and they’re not magic because they don’t have microwaves.’).

Adams is fine, but her performance suffers from the choppiness of the storytelling – she has no arc, only radical departures from her previous scenes.         Cinematography, production design, art direction, costume, hair and makeup are all top notch, lending more regional flavor to the film than its content.  “Hillbilly Elegy” does a good enough job portraying the obstacles many forgotten Americans face, it just doesn’t give them any historical perspective.