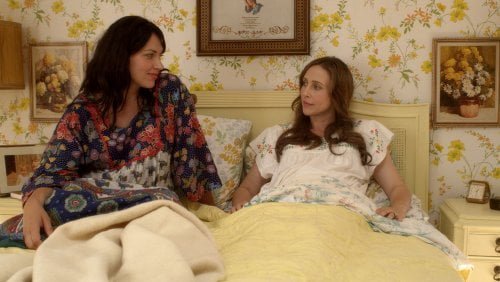 Making her directorial debut behind the camera while starring in front of it, Vera Farmiga ("Up in the Air," "Source Code") proves herself adept at forging various relationships on screen, but awkward when it comes to jumping timelines, symbolism and fantasy. Farmiga herself is quite compelling exploring one woman's spiritual journey during the onset of the women's liberation movement, especially as caught between free spirit best friend Annika (Dagmara Dominczyk, "Running with Scissors") and judgmental pastor's wife Deborah (Barbara Tuttle), but her destination is ambiguous. Carolyn Briggs and Tim Metcalfe ("Haunting in Connecticut") have adapted Briggs’ memoir, 'This Dark World,' and Farmiga concentrates as much on Corinne's sexual life as her spiritual one. She segues from the adult Corinne's born again Baptism with an underwater POV shot that brings us to Corinne as a child gazing up from within a tub (this kind of literal parallelism is overused and wears thin). In her farmhouse kitchen, she plays with a baby pig as she observes her father CW (John Hawkes, "Winter's Bone") playfully mounting his very pregnant wife Kathleen (Donna Murphy, "The Fountain," "Tangled") from behind. Later, when the teenaged Corinne loses her virginity to Ethan (Boyd Holbrook), the crush-worthy lead singer of The Renegades, she does so in a field, her attention taken by an approaching sow. (Why is lovemaking associated with pigs in happy scenes? Sex in both marriages sours later.) A shotgun marriage follows. When Ethan drives the Renegades' tour bus off the road into a river yet still manages to save baby Abby, the young couple see it as a sign to give their lives to God. And poof - suddenly Farmiga's younger sister has been replaced by herself and, more jarringly, Holbrook's been swapped out for Joshua Leonard ("The Blair Witch Project," "Humpday") who bears no resemblance. We've only jumped ahead about five years and yet the change in casting is so disorienting it takes a minute or two to realize we're with the same characters. Pastor Bill observes trouble in the marriage and so Ethan listens to a 'Jesus Likes Sex' tape on how to please their wives with Pastor Bill (Norbert Leo Butz, "Dan in Real Life," "Fair Game") and his not-quite-communal hippie group. Meanwhile Corinne's laughing at her friend Nika's naughty attempt to talk their way out of a speeding ticket (on a country road in the middle of nowhere?). Nika so adores sex with her plain husband Ned (Michael Chernus, "The Messenger") her bedroom is plastered with drawings she's made of his penis, which she calls Shamu. When she encourages Corinne to do the same the result looks like an asparagus stalk, a very thin one. Annika is so spiritual, she speaks in tongues. Try as she might, Corinne can't find the same inspiration and is frustrated - why is her friend's life so full and hers so lacking? Then, as if punishment for her happiness, God delivers a cruel blow to Annika which shakes Corinne's faith. Corinne begins to stand up for herself when her church, and therefore her husband, expect their wives to be subservient. Farmiga makes wonder and a love of life so evident in her scenes with Dominczyk, one wishes she'd laid the groundwork for Corinne's growing sexual apathy towards Ethan more deftly than replacing the actor with a less attractive one. We do see her pleasure when other men take notice. Later, she makes her unrequited lust evident Luke (Ebon Moss-Bachrach, TV's 'Damages'), a parishioner she sparks with, finds his own woman. That turns to wistful, wiser acceptance when she spies postman Liam (Sean Mahon), a potential romantic interest after she leaves Ethan, with his heretofore unmentioned wife. Farmiga shows a real talent for expressing complex thoughts through her actors' facial expressions (there's a lovely late wordless scene between the remarried Kathleen and CW and once Corinne's marriage breaks down Farmiga and Leonard convey their sexual disconnect with few words). But then there are her flights of fancy, all of which fall flat. When her childhood pastor (Bill Irwin, "Rachel Getting Married") appears to admire her mother's décolletage more than her own salvation, Farmiga flashes to the two adults flopping around on a church bench. Deborah's admonishment that a dress might be too revealing flashes to the pregnant Corinne voguing in a full length mirror attired in black lingerie. Lines of dialogue are repeated over time, intended to have ironic weight the second time around, but when Corinne literally finds herself 'outside with the dogs,' it's hard not to laugh. This was certainly an offbeat project to take on as a filmmaking debut and Farmiga puts herself out there in tackling it. Her direction of actors is heavenly but her vision struggles in purgatory. "Higher Ground" is uneven but Farmiga's ambition is to be admired.