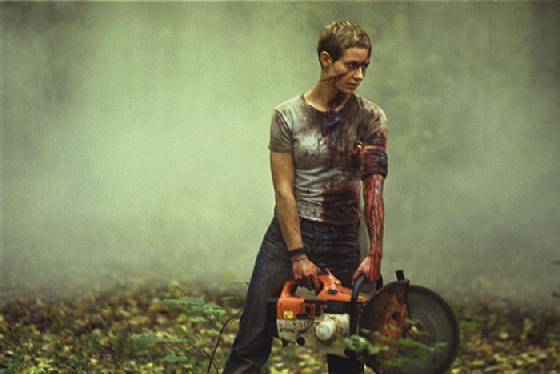 Marie and Alexis (Cecile De France and Maiwenn Le Besco) are best friends heading to the country home of Alexis’s parents to prepare for their school exams. But the beautiful, idyllic setting is shattered one night when a straight razor-wielding stranger murderously invades the quiet home, slaughtering Alexis’s family and leaving the two girls alone to survive the demented killer’s deadly hand in “High Tension.”

Marie (Cécile De France, 2004's "Around the World in 80 Days") travels with her best friend Alex (Maïwenn Le Besco, sister of Isild and the diva of "The Fifth Element") to meet Alex's family in the French countryside. Unknown to Alex, Marie is hoping for more than friendship. Unknown to them both, a serial killer (Philippe Nahon, "I Stand Alone's" Butcher, "Irréversible," "The Chateau") of young women is on the loose and that very evening will storm the house, taking Alex hostage. Marie remains undetected and is determined to save her friend in cowriter (with Grégory Levasseur)/ director Alexandre Aja's (both of the upcoming "Hills Have Eyes" remake) "High Tension." Borrowing liberally from American horror classics of the 1970's, Aja creates a very effective slasher thriller only to light a match and send it up in flames with a third act twist that makes absolutely no sense. Gay activists are sure to condemn Aja's character motivations, and rightfully so, but "High Tension" delivers real suspense in the early going. We're clued in to the killer's existence when we see him in an ancient delivery truck, masturbating himself with the head of a recent victim, which he tosses out the window when he's done. Meanwhile, the girls laugh and sing as they drive the same roads into the country. Alex plays a prank on Marie in a cornfield that foreshadows her fate. Marie is given a guest room on the upper floor of the restored farmhouse, a vantage point that allows her to view the killer's arrival and attack upon Marie's father (Andrei Finti). With no means of making a telephone call, Marie hides and escapes the killer's notice. We can see this killer is highly intelligent but his use of hunter's ploys, checking the guest room's radiator for heat and sink and medicine cabinet for use. After also killing Alex's mother (Oana Pellea) and small brother (Marco Claudiu Pascu) in gruesome fashion, the large man shackles Alex in the back of his truck. As he makes one pass around the house, Marie, armed with a butcher knife, gets in with Alex, but instead of being able to attack, she is also locked inside. The girls get an unbelievable break when the truck stops at a gas station and Marie gets inside without detection, but station attendant Jimmy (Franck Khalfoun, "Snowboarder") is not so lucky and Marie, frustrated by the police, takes Jimmy's car and gun and follows the killer's van herself. Once you get over Lions Gate's odd decision to switch back and forth between dubbing and subtitles for this French film, it's easy to settle in for a solid genre outing. The isolated farmhouse's exterior spotlights make it stand out on the landscape, just as Jimmy's bright yellow muscle car screams its presence on dark country roads. Abandoned greenhouses make an eerie setting for Marie's final showdown with the killer, who accuses her of lusting for his prey. But Aja begins to lose audience sympathy for his heroine when she's too rash to work with police in determining her location at the gas station. He loses audience sympathy altogether with his irredeemable plot twist, which can't bear out all that has come before and isn't even well executed afterwards. Prepare for about seventy minutes of "High Tension" and be reassured you'll be laughing for its last twenty. It is a textbook case of a young director not knowing when to leave well enough alone.

Sophomore Helmer Alexandre Aja almost hits the mark in this oft-scary monster story that builds up genuine tension with its creepiness and edgy, sometimes gruesome violence. The ruthless, relentless killer that haunts Marie and, especially, Alexis could have been a horror classic in the realm of Michael Myers in Halloween” or Jason in “Friday 13th” (though not as good as Leatherface in “The Texas Chainsaw Massacre,” the 1974 original). But, as the story takes its surprise twist, it irreparably deflates the terror balloon that was so well built up during the first two-thirds of “High Tension.” Until the big surprise, the combination of the immediate, deadly threat of “le tueur” (Philippe Nahon), the moody photography by Maxime Alexandre and the most excellent sound designed that puts you on edge are a real draw to “High Tension.” When the shocking truth is told, though, the elaborate and fragile horror house of cards falls apart. Suddenly, instead of going with the flow, I found myself distracted and thinking of all the plot holes introduced. Alexandre Aja and Gregory Levasseur have crafted a truly gripping horror story that has more than a passing resemblance to “The Texas Chainsaw Massacre” and “The Silence of the Lambs.” It’s too bad that it takes the cheap way out with its twist. Philippe Nahon, who also gave a monstrous performance as a wife-beating butcher in “I Stand Alone,” is scary as hell brandishing his razor as he relentlessly hunts down his prey. Cecile De France is a decent, resourceful heroine but isn’t a super-woman in her battle against “le tueur.” She’s just a girl trying to survive – until she starts wielding a barbwire-studded club. Then, look out. The rest of the cast is background at best. Maiwenn Le Besco has to suffer through being held captive and gagged through most of the film. High Tension” fulfills its title promise for a goodly portion of the film but, at the critical moment, the plug gets pulled.