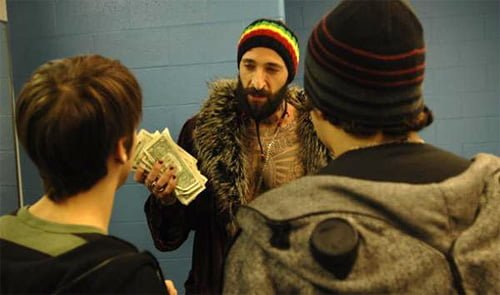 Henry Burke (Matt Bush) is in the midst of final exams that will secure his place as class valedictorian. Elated after acing one of his exams, he hooks up with school stoner Travis Breaux (Sean Marquette) and, in a moment of weakness, takes a hit on a monster joint. Unbeknownst to Matt, Principal Leslie Gordon has decided to crack down on marijuana use by making the students take a mandatory drug test at Morgan “High School.”

Valedictorian Henry Burke (Matt Bush, "Adventureland," "Margaret") is thrilled about his scholarship to MIT, but ends up in detention when stoner Travis Breaux (Sean Marquette) causes his parking lot accident with principal Gordon (Michael Chiklis, TV's 'The Shield'). Breaux apologizes and in the spirit of camaraderie Henry takes his first toke - right before Gordon announces a school-wide, mandatory drug test. Breaux calms a panicked Henry with a psychedelic solution - swap out the next day's bake sale with pot brownies so everyone's test results will come out positive in their "High School." Debuting feature cowriter (with Eric Linthorst)/director John Stalberg, Jr. sounded like he had the high concept for a great stoner comedy, especially as it was based on a personal experience, but make no mistake, "High School" is the dullest, deadliest excuse for a comedy in some time. At about the year's midpoint, this is easily the worst film to date. Oscar winner Adrien Brody seems to take perverse pleasure contracting himself to crappy projects. Brody's Psycho Ed, a former bright star who's now the town's drug dealer. Breaux knows about a jar of pure THC crystals he reaped from an entire harvest of his home-grown chronic, so he and Henry pay a visit to steal the stuff to have enough to bake all their classmates and faculty. And so they have one judgement-impaired guy after them along with Sebastian Saleem (Adhir Kalyan, TV's 'Rules of Engagement'), the salutatorian who's gunning for Henry's spot, the only student to forgo a chocolaty treat. There is nothing inspired about kids and adults all getting higher than high. Too much time is spent in school bathrooms where guys can try on prosthetic penis's to force double entendres. Michael Chiklis, in a bad, red wig, channels his inner nerd to no avail and a subplot involving him sexual harassing his secretary is nonsensical. Brett Kelly is cast as his son, because, well, Brett Kelly still looks like the kid he played in "Bad Santa," just as it's supposed to funny when "Revenge of the Nerds'" Booger, Curtis Armstrong, shows up as a teacher. Other desperate attempts at humor include the name of three time spelling bee champ, stoner Charlyne Phuc. Production values are about as basic as they get with an abandoned school whose interior consists of painted cinderblock (black in the detention room!), a depressing locale. And speaking of detention, "High School" is so bad it almost gives me fond memories of "Detention."

When I learned that “High School” was made in 2010, I had a sinking feeling in my stomach. This never bodes well when it takes a stoner comedy two years to get distribution and this un-funny comedy proves the point. Here’s the premise of the story – do not worry, I am not giving anything away – Henry gets high, principal institutes drug testing, Henry enlists Travis’s aid and they hatch an elaborate plan to get Morgan High high and foil the drug test. In experienced hands, this could have been funny. First time director and co-scripter John Stalberg shows his lack of experience in his debut work. He and co-scribes Erik Linthorst and Stephen Susco fall flat on their collected faces with a story that is obvious and not funny – I watched this seemingly endless flick with hardly a smile, never mind a laugh. The two young stars have no charisma and the veteran cast – Oscar-winner Adrien Brody, Emmy and Golden Globe winner Michael Chiklis and Colin (son of Tom) Hanks – are wasted. (What has happened to Brody’s career since “The Pianist”?)