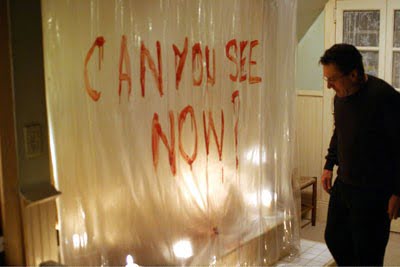 After his wife's suicide, David Callaway (Robert DeNiro) takes his ten year old, Emily (Dakota Fanning, "Man on Fire"), to a country house where they can both heal and make a fresh start. At first, David believes Emily's new imaginary friend Charlie is harmless, and her psychiatrist Katherine (Famke Janssen, "X-Men") suggests he is an acting out tool, but increasingly disturbing events lead David to question whether his daughter is becoming psychotic or her friend is flesh and blood in "Hide and Seek."

New Yorker Ari Schlossberg claims to have begun his first published screenplay by building on a fear of the woods, but what he has delivered is a hackneyed shocker stuffed full of ludicrous red herrings that does not stand up to examination once its 'twist' is revealed. Director John Polson ("Swimfan") invests the film with some genuinely creepy moments in its build, but the whole thing comes tumbling down in the third act. Of course, Callaway procures 'the largest house of the lake' in the prosperous burg of Woodland, and is shown around by realtor Mr. Haskins (David Chandler) and Sheriff Hafferty (Dylan Baker, "Happiness"). Emily is immediately drawn to an outdoor natural arch which leads to a cave mouth and remains withdrawn - her favorite dinner goes uneaten and she dismisses dad's attempt to recreate mom's bedtime game of hide and seek. The next day, Laura (Melissa Leo, "21 Grams"), the Callaway's neighbor, drops by with a welcoming gift of home made preserves. David takes Emily into town where he meets Elizabeth (Elizabeth Shue, "Leaving Las Vegas"), a newly divorced woman caring for her ten year old niece Amy. A play date proves disastrous, with Amy running screaming from the house, but Elizabeth returns for an even stranger dinner. Nightly recreations of Alison Callaway's bathtub suicide are increasingly disturbing and all blamed on Charlie. Polson and his director of photography Dariusz Wolskki ("Pirates of the Carribean") utilize the claustrophobic shots traditionally used in horror films, but limit themselves to only one cheap 'startled cat' scene which actually foreshadows an upcoming scare. Even so, they light the Callaways' bathroom door from every angle, an effect which, while perhaps eerie, is distracting in its illogic. Composer John Ottman ("X2") uses Fanning's warblings in his score, echoing "Rosemary's Baby" in the early goings. Fanning once again proves herself an actress mature beyond her years, but this material is beneath her. DeNiro's been slumming it for years and Amy Irving gets out of the picture early as his doomed wife. It is hard to believe Shue was once nominated for Best Actress anymore. Janssen is durable as Emily's trusted shrink. Every other supporting character is trotted out as a potential Charlie, with Laura's husband Steven (Robert John Burke) showing undue interest in Emily, Haskins showing up at two a.m. to slip additional keys under the door and the Sheriff's interrogation of Emily sounding more like conspiracy. Emily's dark renderings of Charlie - children's drawings quickly becoming the biggest cliche in horror films - seem to favor likenesses of everyone but the actual. Her final piece in crayon is another piece of psychiatric illogic, a cheap thrill. "Hide and Seek" boasts a high powered cast and throws out some satisfying crumbs, like the climatic revelation coming from a carton for 'The Padded Wagon,' but its surprise twist is more annoying than frightening. Count to ten before buying a ticket for this one.

A tragic suicide takes the life of Alison Callaway (Amy Irving) away from her husband, psychologist Dr. David (Robert DeNiro), and their daughter, Emily (Dakota Fanning). David decides it best to leave New York City and its sad memories behind and moves upstate to the small, peaceful town of Woodland. But, that peace is shattered when the doctor discovers that Emily has an imaginary friend named Charlie - or, is he really imaginary? - in "Hide and Seek." As the well-tread story of "Hide and Seek" plays out, I was struck by the derivative nature of the film while I watched many scenes and ideas that were extant in the far superior "The Shining," the similarly (to "H&S") mediocre "What Lies Beneath" and Johnny Depp's recent "Secret Window." Of these four films only "The Shining" stands out as a truly horrifying horror film. Robert DeNiro does nothing to make his David callaway either a believable or sympathetic character. The actor seems to be coasting along on his past laurels and gives a two-dimensional, cookie-cutter perf as a man conflicted by the arrival of Emily's new, imaginary friend. DeNiro goes through the motion as he must face one horror after another, only to be told by his daughter that "Charlie did it!" Dakota Fanning has been having a great acting track record - "I Am Sam" and "Man on Fire" come to mind - but even she cannot save "Hide and Seek." Her performance is split between looking wan with huge circles under her eyes to laying the blame for all the terrible things going on upon the shoulders of "Charlie." Supporting cast is wasted by the placing of some sinister, off kilter quirk on most of the film's other characters. Dylan Baker, the local sheriff, is under suspicion because he has keys to all the cottages on the lake and arrives at pointedly significant times. Others, like the realtor who shows up at 2:00AM to "leave a set of keys" or the neighbors who act really weird after losing their own daughter are introduced to deflect suspicion from the true monster - unsuccessfully. Elizabeth Shue has "victim" written all over her character. Famke Janssen is the only one who comes across at all well as Emily's psychiatrist and friend. It's not that "Hide and Seek" lacks creepy moments. There are several but they are so few and far between and the "surprise ending" really isn't, making this a waste of talents. Helmer John Polson, whose prior claim to fame is "Swimfan," does a routine, even stodgy, job in building his horror tale. Of course, the script, by first time screenwriter Ari Schlossberg, is also to blame by using clichéd and oft-told story of…I better not say any more, in case you don't take my advice and blow your hard earned bucks seeing this at the theater. If you must see it, wait until it is available for DVD rental and spend the money you saved to order a pizza.