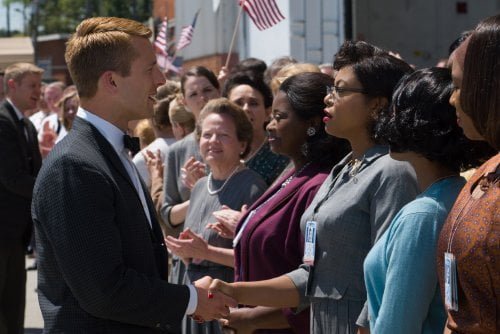 In this, the 21st Century, we take for granted the computer. For most of us, it has been a part of our daily lives for decades. But, back in 1962, as NASA prepared to launch the first American into earth orbit, there were no sophisticated computers to ensure his safe launch and return. This task fell upon the unsung heroes, the Human Computers, African-American women with a genius for mathematics who had the right stuff to bring John Glenn home in “Hidden Figures.”

I plead ignorance of the amazing contribution the African-American woman, those computers, who were responsible for making the calculations needed to put an American astronaut into space. “Hidden Figures” does a commendable job in bringing their story to light, a story that has for far too long been untold. I thought, going into this little known tale of American ambition, no matter the race, that the main characters – Katherine Johnson (Taraji P. Henson), Dorothy Vaughn (Octavia Spencer) and Mary Jackson (Janelle Monae) – might be composite figures representative of a number of people. No, these are real people whose story is told with a lot of heart by director/writer Theodore Melfi and co-scripter Allison Schroeder, adapting the book by Margot Lee Shetterley. The story of the three ladies and those around them is given the traditional biopic treatment with the obstacles facing African American trotted out as they prove themselves the equals of their white NASA coworkers. “Hidden Figures” does go through the paces and touches all the expected bases of the discrimination the women must face and, ultimately, their ability to overcome prejudice and earn respect for what they do, despite the color of their skin. The three femme stars make for one of the best and brightest ensemble performances of the year. But, each of the stars shines in her own way and each gives dimension and believability to her character. Supporting cast tends toward those opposing or grudgingly accepting the entrance of black women into their hallowed white enclave. Kevin Costner is the most developed as the head of the Space Task Force who see Dorothy’s genius, giving her the chance to shine when assigned to calculate John Glenn’s re-entry trajectory where a single mistake could be fatal. The concentration of “Hidden Figures” leans toward Katherine but Dorothy and Mary’s stories of success and overcoming racial obstacles are also given the shrift they deserve. Dorothy was the first black women to break down the race barrier at NASA and helped bring black, female computer programmers into the Space Race. Mary became the first black female engineer at NASA and broke precedent when allowed to attend an all white university for advanced engineering training. There are a number of Hallmark moments sprinkled throughout “Hidden Figures” that will slake the thirst for the sentimental and uplifting. But, the truly inspirational telling of an, until now, untold story is where the film shines. If this does not fill you with admiration for these unsung heroes, then you are a real Scrooge.