Hey, Boo: Harper Lee and ‘To Kill a Mockingbird’ 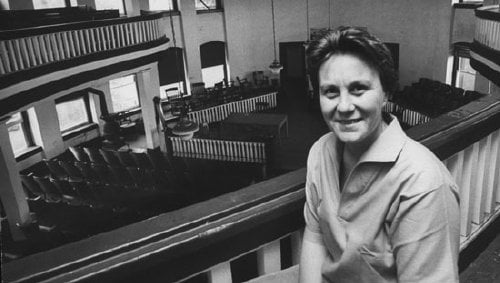 Harper Lee worked as an airline ticketing agent for years until she was befriended by Broadway composer Michael Brown and his wife Joy. As a Christmas gift to the struggling author, the couple gave her one-year’s wages “to write whatever you please.” Within that year, she wrote a Pulitzer Prize winning novel. Actress-turned-documentary filmmaker Mary Murphy tells Lee’s story before and after the fame in “Hey Boo: Harper Lee and ‘To Kill a Mockingbird.’”

Mary Murphy's "Hey, Boo: Harper Lee and ‘To Kill a Mockingbird’" is more a celebration of a book and its movie adaptation than a biographical documentary - there is no current interview with the author, although we do hear plenty from the sister fifteen years her senior who still practices law at the age of ninety-one. Murphy covers the usual ground - Lee's background and autobiographical influences, the friendship withTruman Capote (whose speculated 'help' is firmly debunked and whose jealousy is firmly underscored, damned by his own words), her involvement with the film. Murphy also gives explanations as to why she retired from the public eye (except to accept awards) and never wrote another book, but nothing in the way of how she's spent her life since (both she and her more talkative sister apparently have always been single, but there is no speculation about that, even though parallels between Harper and her literary 'tomboy' Scout are plainly laid out). Murphy would also have us believe that Lee was Scout, at least until she decides that Lee was Boo! "Hey Boo" really comes alive not when the filmmaker is concentrating on the author, but when she lets others - mainly famous writers - share their love of the book. Passages are read and we marvel at just how many great moments are there to be found. Oprah Winfrey reads the section about how Atticus is paid silent tribute as he walks out of the courtroom defeated and admits that this would have been the first book she would have encouraged others to read. It is also startling to be reminded that 'To Kill a Mockingbird' (originally titled 'Atticus') was published before the Civil Rights movement - where did this shy Southern woman find the bravery to take such a stance and how close did discrimination hit home? Unfortunately, Harper Lee remains pretty much the mystery she has always been in Murphy's film, but as a paean to a great piece of American literature, it does the job.

“Hey, Boy” is the story about the author’s incredible rise to fame with her one and only novel and her decision to not write another. After “Mockingbird,” Lee felt that “there was no where to go but down” and, despite the urging of her friends, put away her typewriter. Mary Murphy does a loving job in telling Nell Harper Lee’s story of ambition and the people that helped form both her character and the characters in her novel. Her father, Amasa Coleman Lee, was the role model for her seminal character, Atticus Finch, and Dill, the author says in her last radio interview in 1964, is modeled after her childhood friend Truman Capote. Scout is, of course, Lee herself. Murphy does not just chronicle Harper Lee’s life, she also delves, in depth, into the Academy Award winning film by the same name, a film that is an American masterpiece. The film, one that you can readily watch whenever it is on TV (and, I do), showcases many fine performances with a spectacular one by Gregory Peck in his finest performance ever, The filmmaker analyzes the book and the film with the help of many prestigious talking heads, like Tom Brokaw, Roseanne Cash, Oprah Winfrey and Andrew Young. Another contributor is Lee’s 99-year old still-practicing- law sister Alice. “Hey, Boo: Harper Lee and ‘To Kill a Mockingbird’” is a lovingly told biography that is well-crafted, informative and entertaining – all things that a good documentary should be.