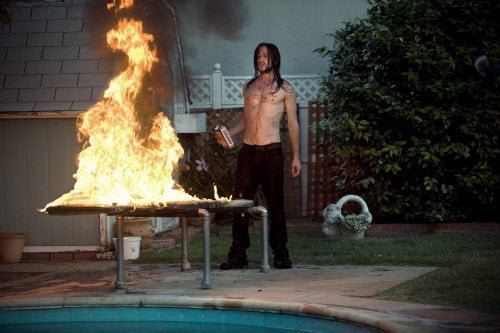 After his mother is killed in a car crash, T.J. (Devin Brochu, "In the Valley of Elah," "Rubber") has no one to turn to. He's bullied at school, his dad, Paul (Rainn Wilson, TV's 'The Office,' "Super"), has sunk into a deep depression and his grandmother (Piper Laurie, "Carrie"), whom they've moved in with, is kind but unrelatable. Expressing his anger by throwing a rock through the window of a new housing development, T.J. inadvertently outs the squatter who was living there. When that same metalhead suddenly appears in his grandma's living room, T.J.'s about to get quite the education from "Hesher."

Now here's an American independent that isn't easily categorized, even if it does go a little soft at the end. First and foremost, cowriter (with David Michôd)/director Spencer Susser had the guts to cast his lead against type and once again, Joseph Gordon-Levitt ("500 Days of Summer," "Inception") proves to be one of our most versatile and creative young actors. And while young Brochu holds his own, Gordon-Levitt and Piper Laurie make for one of the year's most intriguing screen couples. As with his cowriter's "Animal Kingdom," Susser knows how to keep his audience guessing about just what is coming next. Before T.J. even meets Hesher, he's funneling his grief into rage. He haunts the auto body shop where the former family vehicle sits, no matter how many times and in how many ways the unsympathetic owner (John Carroll Lynch, "Gran Torino," "Paul") tells him he cannot buy it. He paints a lewd insult onto the side of bully Billy's car and is saved from a beating by Nicole (Natalie Portman, "Black Swan," "Your Highness"), a supermarket cashier just coming off shift. She drives him and his bashed bicycle home. There his father lies glassy eyed while his fuzzy-haired grandma shuffles about in her house coat, making meals and hoping for company that never comes on her daily walk. T.J. is terrified when the unpredictable Hesher materializes, asking where the laundry is, stripping off his clothes to reveal tats of a stick figure shooting itself in the head on his chest and a giant middle finger on his back. The long-haired, taciturn vagrant appears to be dangerous, misanthropic and self-serving and while he is all those things, we get hints that there is more, like his totally blunt and crude sexual appetite, love of Metallica and Motorhead and, more surprisingly his uncluttered empathy with his unwitting hostess, T.J.'s grandma. Madeleine Forney and her son never question Hesher's presence, simply accepting him as a friend of T.J.'s, and the stranger (in the truest sense of the word) has an unexpected impact on the shattered family - he helps them though their grief. Hesher (which is the term for a diehard heavy metal enthusiast) is a study in contradictions and Gordon-Levitt does a deliciously deadpan take on the character, sending multiple signals at once, jamming expectations in your head. When T.J. turns down his grandma's request for a morning walk, Hesher demands he go because 'what if she gets raped?' The concern mixed with crude suggestion is typical of this character. He stands back while T.J. is shoved in a urinal, but later torches the perp's car (while also leaving a frantic T.J. at the scene of the crime). In fact, Hesher loves nothing more than to wreck havoc and destroy property, especially with flames. Nicole also has a place in T.J.'s healing, becoming an unlikely friend. She also gives T.J. someone to care about when she confesses what a bad hand she's been dealt. These two adults also connect without T.J. and when he discovers them, he feels betrayed. Unfortunately, so do we and the film never really recovers from this point on. Still, Susser's onto something here and he creates his own odd world. Madeleine Forney's ranch house is outfitted to a T, reflecting not only the worn decor of decades prior, but of her faith and optimistic outlook. It's a far cry from the clean modern lines of T.J.'s home we see in flash back, and, despite its outmoded shabbiness, it's welcoming. Outside everything looks uglier. The film's last act is perhaps the only expected happening in "Hesher," and the film sags into sentimentality, but Hesher stays true to form. The film's last image, too, is suspect, a 'gift' of questionable taste combined with a message only visible to external audiences, a touch that screams Sundance independent. Still, "Hesher" has a unique creation at its core and Gordon-Levitt breathes fire into it.