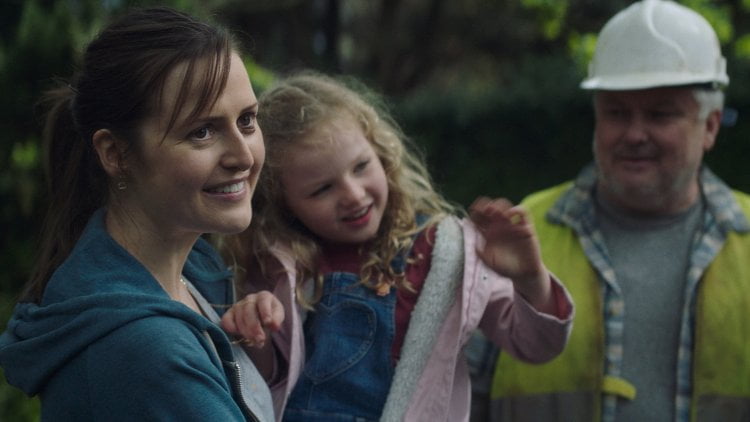 Sandra’s (Clare Dunne) become so fearful of Gary’s (Ian Lloyd Anderson) hair-trigger explosions of physical violence, she’s established ‘safe words’ with their eldest daughter Emma (Ruby Rose O'Hara).  On the day he begins to slam her around their kitchen, the ten year-old runs to the local convenience store, opens the lid of her lunchbox where Sandra’s taped a message proclaiming her imminent death, and demands the clerk call for help.  From that point onward, Sandra, Emma and Molly (Molly McCann, "Vivarium") find themselves navigating Dublin’s temporary shelter situations until a bedtime story gives Sandra the idea of building a home for them “Herself.”

Dunne, who cowrote the screenplay with Malcolm Campbell, crafted this story about a woman bucking against the odds after hearing about a friend in dire straits and engaged her Shakespearean stage director Phyllida Lloyd ("Mamma Mia!," "The Iron Lady") to helm the production.   Dunne is the central force of nature here, having crafted her character so specifically, her unusual birthmark (quite fetching actually) is written into the script.  Following a spate of UK films on the travails of the single mother (“A Good Woman Is Hard to Find," "Wild Rose," "I, Daniel Blake"), Dunne’s work encompasses not only financial hardship and the frustrations of bureaucracies which often contradict common sense, but the added burden of a toxic partner willing to destroy everything in order to ‘win.’

Living in hotel rooms where she’s forced to make meals for her family with no cooking facilities, we watch Sandra cope, working three jobs, meeting with Women's Aid worker Jo (Cathy Belton), and delivering and picking up her two girls from Gary.  She suffers something like PTSD after every meeting with Gary as he mounts the ‘we’ve-heard-it-all-before’ charm offensive and supposed easy way out, but when Molly starts to refuse to get out of the car for visits with dad, Gary’s behavior takes a typical turn.

This makes Sandra positively paranoid about keeping her ‘self build’ tiny home project a secret.  After presenting her well reasoned case to Dublin’s housing authority, proving how their loan would be repaid far more quickly than the money they’d have to expend keeping her dependent, and having it shut down because of its unorthodoxy, the young mother is shocked when one of her employers, Peggy (Harriet Walter), offers her the parcel of land behind her house to build on and a loan for construction.  But despite the apparent simplicity of the design she’s chosen, Sandra finds herself in over her head until she convinces a local contractor, Aido Deveney (Conleth Hill), to help.

If it seems a bit unbelievable that we never see Sandra lose patience with her girls, no matter how tired or troubled she is, the filmmakers otherwise do try to avoid many of the usual clichés.  One could say they go too far in stacking the deck against their heroine with a crushing final blow that is a bridge too far for even those who reject happy endings.  Yet even this is countered by support from a very unexpected place, and the film’s final scene quietly reflects on what really matters.  Dunne’s given us a character worth rooting for as she wends her way through a complex situation and the two young actresses supporting her are no mere moppets.