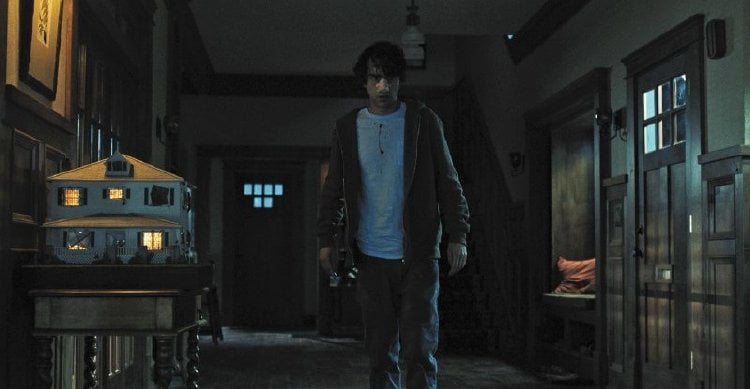 When her mother Ellen Taper Leigh dies at 78, her daughter Annie Graham (Toni Collette) delivers an odd eulogy, one in which she expresses surprise at how many have come to pay respects before noting that her difficult, secretive mother would have disapproved of her even talking about her. She, her husband Steve (Gabriel Byrne) and teenaged son Peter (Alex Wolff) seem relieved that the old woman is gone, but her thirteen year-old daughter Charlie (Milly Shapiro), Ellen's favorite, is having a difficult time. The household's preexisting tensions escalate after a horrific accident and Annie and Peter experience supernatural hauntings which just may be "Hereditary."

Talk about putting yourself on the cinematic map. With his feature debut, writer/director Ari Aster has given us the ultimate horror-film-as-mental-illness-metaphor, one whose story has clear influences in "Rosemary's Baby" and whose tone recalls both "The Babadook" and "Krisha," without feeling derivative. This is a masterpiece of freaky filmmaking, unsettling from its very first image through its hellish denouement. The first image we see is an elaborate tree house, one which has been designed into the landscape of the Grahams' stunning, sprawling Arts & Crafts home. Inside, we see a workshop with several dioramas representing its interior before the camera slowly zooms into one, a bedroom where a male figure sleeps, a video camera rig next to the bed covered by a jacket. Suddenly the scene springs to life, Steve entering to rouse Peter for his grandmother's funeral. Steve cannot find Charlie until he pulls down the stairs to the attic, his daughter curled up on the floor. In the Grahams' home, beware elevated spaces. At Ellen's service, we note that her daughter wears the same necklace as her mother lying in her casket. Charlie munches chocolate bars throughout, mom's question about nuts as loaded as spotting a gun in the scene. Charlie also sees an unusual mourner, a blonde man grinning both weirdly and inappropriately. That night, the little girl whose odd features are perpetually arranged in an anguished frown, asks her mother who will take care of her now. Astonished, Annie says that she will, of course. 'When you're dead?' Annie, already disturbed earlier at finding her mother's former locked bedroom's door ajar, enters and begins looking through her boxed belongings, mostly books on spirituality and the occult, one including a handwritten note from Ellen to her daughter stating 'our sacrifices will pale next to the rewards.' Spooked, Annie enters her workshop and turns one of her dioramas towards the wall, its contents chilling. After a bird strike on her classroom window, Charlie goes outside and surreptitiously snips the head off the dead pigeon with a pair of scissors, perhaps to add to her growing collection of homemade oddities in her room (following in the footsteps of her artist mother?). It is also a gruesome foreshadowing, followed by an unheeded warning when Steve gets a phone call from the cemetery that he does not share with his wife. Steve is grim normality, the anchor of a family being pitched more and more violently in emotional seas. Charlie is a depressed loner, Peter a distraught outsider escaping in clouds of pot smoke. Annie is becoming more and more volatile, her friendship with grief support group member Joan (Ann Dowd) leading her into Ouija-like seance scenarios that further unhinge a son already rattled by horrific nightmares. Byrne is the least compelling member of the cast, displaying little in the way of personality other than concern for his wife's mental state and its impact on their son. Shapiro, whose features suggest the bird she has mutilated, conjures a truly lost soul. But the powerhouse performances come from Woolf and especially Collette, the former looking more haunted by the day, the latter veering from guilt-wracked maternal concern to invective-filled fury. Every aspect of the production has been meticulously considered, the home's wallpaper, which suggests Annie's necklace design, often sporting mysterious words inked by an unknown hand. Aster resists spelling things out, leaving us to piece clues together, some of which we can (that video camera in Peter's room, for example), others teasing. Cinematographer Pawel Pogorzelski's ("Water for Elephants," "Tragedy Girls') camera creeps along hallways and peers through doors, at one point presenting Collette's image upside-down then rotating to rights as she moves. Editors Lucian Johnston and Jennifer Lame cut for maximum effectiveness, which often means away from horrors we only imagine, daytime and nighttime views of the home flipping like a switch for tonal change. Sound design induces chills, original music by former Arcade Fire saxophonist Colin Stetson featuring low, groaning brass instruments, cymbals, the fluttering of winged creatures and his own, heavily processed voice. Believe the hype. "Hereditary" crawls right under your skin and festers there. Grade: