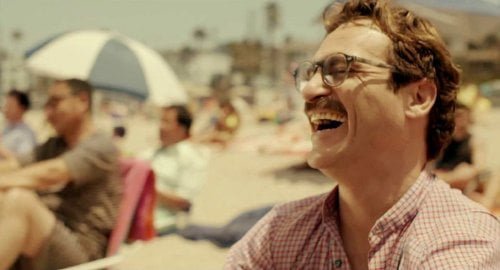 In a near future L.A., Theodore (Joaquin Phoenix) is the most eloquent and touching of writers at beautifulhandwrittenletters.com, where he composes missives for others for a fee, but his difficulty sharing feelings face to face has cost him his marriage to Catherine (Rooney Mara). Intrigued by an ad for a new O/S with artificial intelligence, Theodore comes home and installs it and finds himself indulging in conversations both deep and frivolous with "Her."

In 2010, writer/director Spike Jonze ("Where the Wild Things Are") made a short, "I'm Here," about a robot falling in love. With his latest feature, he continues to look at technology and its relationship to the human need to form relationships with others and yet the man who made the distinctly low tech "Where the Wild Things Are" is quite evident. Jonze's gentle, poignant yet ultimately joyful film distinguishes him as one of the most insightful chroniclers of the human condition. "Her" and its quietly unveiled performance from an extraordinary Joaquin Phoenix are the year's best. Theodore's reflections on his marriage are intertwined with the newfound joy of experiencing life through Samantha's eyes. The O/S has been programmed to grow based upon experience and her enthusiasm for each new concept she engages with pulls Theodore out of his shell. Here is a nonjudgmental intelligence he delights in sharing with (she's like a precocious, developing child) but Samantha is growing in leaps and bounds and when their intimacy births sexual feelings, they get lost in a virtual orgasm, a pure communication of adult love. But Samantha must come to grips with her lack of a physical body and when Theodore is made uncomfortable fulfilling her needs, she goes off to think, making a decision that is best for both of them. Jonze's script is subtle as he builds his case for opening ourselves to experience others. Theodore lives in a world of bubbles. The urban landscape is dotted with individuals all engaged with portable devices (only occasionally, and pointedly, do we see people interact with each other in public). Architectural space is open, predominated with glass. There is little privacy in a world where everyone can look in or overhear. When his friend Amy invites a look at her thesis film, we watch her mother sleep, and yet in this unconscious state, Amy posits that her subject is most free to explore her thoughts. At first, Theodore is even taken aback by his new O/S Samantha (voice of Scarlett Johansson) as she rifles through his files and emails. But what may at first be construed as a lack of privacy reveals the benefits of opening up. Whenever Theodore is too tentative - on a phone sex chatline (SexyKitten is hilarious voiced by Kristen Wiig), with his O/S installer, on a blind date (Olivia Wilde) - the experience ends with disconcerting abruptness. (Conversely, Theodore's impulsive decision to challenge the foul mouthed alien who has appeared in his videogame hologram (voice of Jonze) leads him out of his quagmire.) His own marriage, and the failure of his friend Amy's, are examples which Samantha intuitively acts against. Joaquin Phoenix has always had a strange, almost otherworldly, presence in films and even when we've seen his character in love, there's been a darkness to his acting. With Theodore, though, the actor achieves a radiance that is a new revelation, a buoyant delight in living as he sheds insecurities. Darker impulses such as jealousy and fear of abandonment may return, but the actor digs deep to come out on the other side. He's breathtaking, all the more so when we consider he's usually acting against a voice from an earbud. Equal kudos go to Scarlett Johansson, whose giddy vocals form an undeniable chemistry, one which she had to create singularly, having replaced Samantha Morton (whose name still graces the character). Rooney Mara traverses loving playfulness in her earliest flashback to a bitterness that suggest not only the failed relationship, but an essential mismatch while Amy Adams's sweet and funny Amy shows us that she's two steps ahead of her friend, waiting for him to catch up. Olivia Wilde embodies the desperation and neuroticism of modern life while Portia Doubleday reflects the alarming tendency to experience life one step removed in today's celebrity culture. The film also features Chris Pratt as Theodore's office receptionist Paul, an admirer whose more simple acceptance of things has led more quickly to happiness while Brian Cox gives plummy voice to 'Alan Watts,' an improved version of the British philosopher programmed by a band of O/S's. Jonzes's production is one of the year's most magical as well, production designer K.K. Barrett (along with art director Austin Gorg and costume designer Casey Storm) turning autumnal colors pastel, suggesting all the changing seasons (as well as character themes and emotions). Original music by Arcade Fire is integral to the story, with Samantha composing pieces that reflect her feelings. "Her" is a cinematic expression of alienation and intimacy, pure love and even our place in the cosmos. It is a sublime, perfect film.