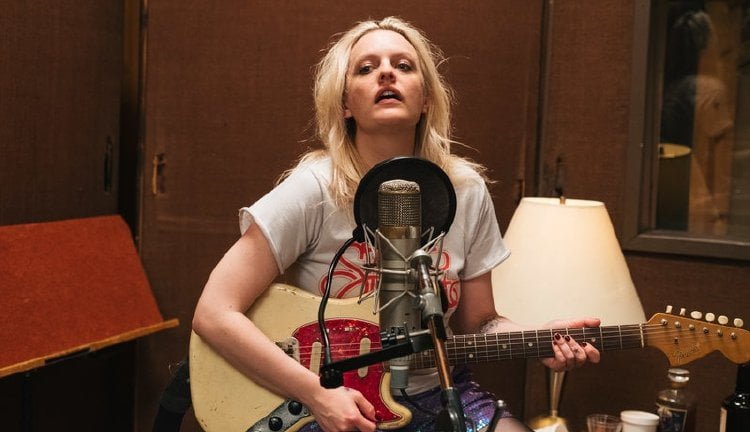 After becoming a punk rock icon in the 90’s with her female band Something She, Becky Something (Elisabeth Moss) has stumbled into such a monstrous pit of ego, drugs and alcohol, she’s alienating everyone around her. Becky is so out of control she doesn’t know whether she’s about to embark on a European tour or not and her antics are endangering her baby daughter Tama. Even the up and coming fans inspired by her, the Akergirls, eventually become disenchanted with “Her Smell.”

Writer/director Alex Ross Perry’s (“Listen Up Philip”) oeuvre is largely composed of psychological portraits of artists - writers, painters, filmmakers - often at odds with artistic parents or relationship partners. With his sixth film, and third with star Moss, he gives us an artist at odds with everyone as she flails about looking for the inspiration that will showcase her outsize talent once again. Moss not only goes there, she goes beyond there, ranting, vomiting, stumbling, strumming, cinematographer Sean Price Williams and composer Keegan DeWitt supporting the assault of her amazing performance.

Perry was inspired by Shakespeare to try a five act structure and it’s a canny choice, allowing for single scene snapshots in time with the loud-quiet-loud aesthetic of 90’s grunge. While Moss’s hair and costume (especially latter day) suggest Hole’s Courtney Love, Perry says he went to their predecessors, the riot grrrls of L7, to create Something She, their fanzines informing his title. Perry also bucks tradition by beginning on the downswing - not only of Something She’s prominence but even of their concert. We witness Becky, Mari (Agyness Deyn, “Sunset Song”) and drummer Ali van der Wolff (Gayle Rankin) celebrating their Spin Magazine cover in a home movie intro before they take the stage for an encore in the present. ‘I’m not f’in finished yet,’ Becky snarls before launching into ‘Another Girl, Another Planet.’

Backstage, her behavior becomes more and more manic. She’s delighted to see Tama, but not the ex, Danny (Dan Stevens), who brought her, disparaging his new girlfriend Tiffany. Ali has to tend to Tama, Becky’s focus all over the place, mostly on the shaman (Eka Darville) she has performing a ritual on Tiffany. Label owner Howard (Eric Stoltz, looking like a cross between Robert Redford and Paul McCartney) now in fairly desperate financial straits, hopes to get his girls back on tour by having them open for Zelda E. Zekial (Amber Heard), the glam pop rocker who was once a protégée. In contrast to Becky’s bile, Zelda’s cool and collected, not flinching in the storm of Becky’s withering criticisms as Ali and Mari watch their future burned to the ground. By the time she collapses in her own vomit, it is more than apparent that Becky is a special form of horror show.

Another home movie, this time of the band wrecking havoc in Howard’s office as they steal a platinum recordfrom its frame, introduces the next segment which finds Becky having hijacked a recording studio, engineer Keith (Keith Poulson)running tape with hopes of catching gold. He doesn’t. Fed up, Ali quits in disgust. Waiting for their studio, Howard’s newest band, the starstruck Akergirls (Cara Delevingne’s Crassy Cassie, Ashley Benson’s Roxie Rotten, Dylan Gelula’s Dottie O.Z.), instead find themselves commandeered by Becky who praises their three way harmony (to Alicia Bonanno’s ‘Can’t Wait’) while claiming sole authorship Something She right in front of Mari. Becky demands piggy back rides and sings Charlie Manson’s ‘Garbage Dump’ for her ‘three little witches’ who don’t know what to make of her.

It is here that Williams’s in-your-face handheld begins to settle for performances, Keegan DeWitt’s aggressive synthesized drum machine augmented by chaotic sampling giving way to women’s voices. But the assault ramps up again as Becky, documentary crew in tow, hits rock bottom, antagonizing her mom (Virginia Madsen) for the camera, coming at Ali with a broken bottle and addressing her audience incoherently, blood streaming down her face.

Perry takes a 180 degree turn for the fourth, quiet chapter which finds Becky finally sober in her rural home, Tama now a little person begging for a song. Moss, who learned to play both guitar and piano for this role, amazes with a moving one take performance of Bryan Adams’ ‘Heaven,’ the lyrics for a lover beautifully reinterpreted for a child. Becky’s long hair is now up, her face scrubbed clean, her message tees traded for comfort chic. A photo shoot brings us a more glamorous version, now reunited with former bandmates, Akergirls and even Zelda, Becky the flawed but more sure footed veteran.

With “Her Smell,” Perry’s cinematic style swings with Becky’s moods. It’s effective, even if early goings aren’t pleasant to sit through. When it’s Moss who’s assaulting us, bring on the beating.