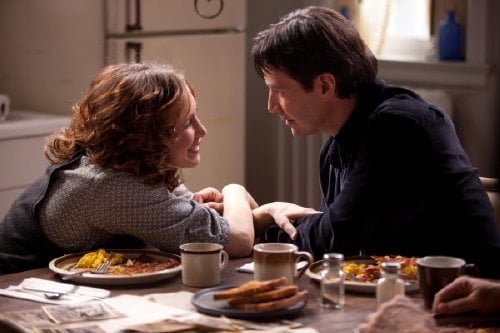 Henry (Keanu Reeves) is a Buffalo toll booth collector who is suckered by old high school friend Eddie Vibes (Fisher Stevens, "Short Circuit") into driving the getaway car on a bank job. Henry didn't have a clue what was going on, but was the only one to go to prison and when he gets out of prison he decides to profit on the time with "Henry's Crime."

With his second film, director Malcolm Venville ("44 Inch Chest") once again doesn't so much tell a story as provide an odd outline for an actor's workshop. This shaggy dog story just doesn't hold together, but Reeves charms as the deadpan hub of a wacky wheel. Reeves's minimal acting style makes understanding his character a gradual process, built in part by his generosity to costars who paint with broader, brighter strokes. James Caan, as Henry's cellmate Max, is terrifically funny here, and he and Reeves are an unlikely but effective team. The film plays a little like "Small Time Crooks" meets "Vanya on 42nd Street." Henry is in a kind of paralysis when we meet him, panicked by his wife Debbie's (Judy Greer, "Love and Other Drugs") desire for a baby. When Eddie shows up at their door out of the blue with a vomiting man in a baseball uniform, Henry's life takes a sharp turn. Believing he's subbing for a first baseman, Henry's sitting in the driver's seat when the bank robbery goes awry, a sitting duck for security guard Frank (Bill Duke, "A Rage in Harlem"). In prison, he's shown the ropes by cell mate Max, a man perfectly content to live out his remaining days on the state's dime. When Henry gets out, he's starting fresh, Debbie having left him for Joe (Danny Hoch, "American Splendor," "We Own the Night"), the vomiting would be criminal. Two things happen to set his path. First, he sees an old newspaper article about a tunnel to Buffalo Savings's vault from the Orpheum theater's basement. Secondly, he meets Julie (Vera Farmiga, "Source Code"), an actress about to star in "The Cherry Orchard" in said theater, when she hits him with her car as he cases said bank. Henry becomes smitten with the actress and Max gets a job as a volunteer at the theater. There is a lot of clunky execution in producer Sacha Gervasi ("The Terminal") & David White's ("Undisputed II: Last Man Standing") script. A tunnel to a bank vault discovered decades ago would surely not still be accessible, let alone through only one layer of wood framing. It makes no sense that the folks rehearsing Chekhov wouldn't notice the sledgehammering and drilling going on in the dressing room of Lopakhin, a role which Henry ends up taking after Max arranges the original actor's ousting. Frank's reintroduction into the action is not only cliched, but lumpen. The themes of the play have little to do with the goings on around it and the film's finale, in which Henry romances Julie on stage, ditches Chekhov altogether, a bad move. But the film's farcical elements are often delightful. It's amusing to see actors within a film critiquing Reeves's acting ability (Henry is deemed 'a natural' and looks quite striking bearded and in costume). Small elements, like Julie's fame in a local commercial, Joe's attempt to go straight or Max's desire for a hot bath, pop back up in understatedly amusing ways. This low budget indie is an odd duck and it rather falls apart at the end, but it's curiously likable nonetheless. The cast is terrific and includes Peter Stormare ("Fargo") as the play's enigmatic director Darek. B- Robin: Robin's review coming soon.