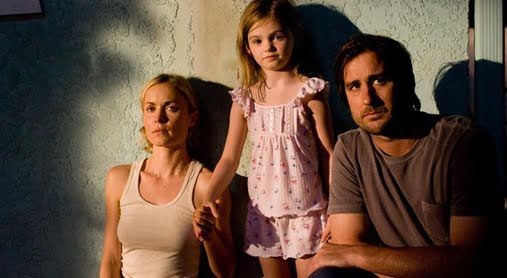 Real estate agent Meg Wyatt (Cheryl Hines, HBO's "Curb Your Enthusiasm") has never had a client like this before. He wants to pay the asking price for a stuccoed ranch that needs some work because, as he tells her, he doesn't intend to live there very long. Wyatt has the exterior redone anyway and neighbor Esperanza (Oscar nominee Adriana Barraza, "Babel") sees a miracle in what he views as a water stain. The neighborhood is perplexed by the sad and angry man they come to know once "Henry Poole Is Here."

If ever a movie pushed my cynicism buttons, this one was it, although, in its favor, it took a while. Maybe because director Mark Pellington and his cinematographer Eric Schmidt have an uncanny way of photographing eyes so that their carriers appear to be aliens which they do for the notable debuts of Rachel Seiferth as grocery store clerk Patience and Morgan Lily as Millie, the young daughter of Henry's other neighbor Dawn (Radha Mitchell, "Silent Hill," "Feast of Love"). There's also something to be said for a slow build that withholds information at the onset and gradually layers in the facts, although it is not at all hard to figure out just what's going on with Poole. Still, by the time this film reaches its climax, its hero's reluctance to try the obvious is just as annoying as that obvious act, a Hallmark card hope for a miracle. Henry Poole (Luke Wilson, "The Royal Tennenbaums," "Legally Blonde") moves in and keeps to himself, excepting forays to the local grocery store where he buys champagne, vodka and Krispy Kremes. He keeps himself in a bleary and disheveled state and resists Esperanza's attempts to be friendly. One day he overhears the conversation he just had and spies a little girl with a tape recorder next door, but she bolts when he attempts to talk to her. The next time he catches her in his own backyard and she flees without her machine. Upon returning it he meets Dawn, an attractive single mom. Meanwhile Esperanza's belief that the side wall of his house bears the face of Jesus and is dripping his blood is driving Henry crazy, but he eventually relents and allows Father Salazar (George Lopez, TV's "George Lopez") to come and conduct tests to lay the matter to rest. But then people begin to touch the face and walk away healed. This 2003 script by Albert Torres, originally titled "Stain," is like a cross between 1997's "Julian Po" and 2003's "Screen Door Jesus" and was chosen by Pellington because of his own life circumstances, having lost his wife suddenly and left with a two and a half year old child. While one can sympathize with the director's need to attach himself to a life affirming message, one can also yearn for the return of the man who made the (very underrated) "Arlington Road" and "The Mothman Prophecies," a pair of chillingly insidious films. There are no two ways about it - despite some good performances, "Henry Poole Is Here" is not only cloying (windchimes on the soundtrack!), it commits the major sin of not always playing by its own logic (the title is a reference to a bit of childhood graffiti, which Henry changes from the past to present tenses. However, the house he has purchased is a substitute for the one he really wanted - his childhood home. When Esperanza arranges to take him there, he describes his old room as 'the last place where I was truly happy.' Then, throughout the film, we only hear of parental fighting that alienated the lonely kid. It is also never explained how a grocery store clerk hears of the very local phenomenon of Poole's wall - she just shows up there one day.) Luke Wilson is OK in the lead role, as is Mitchell as the romantic interest. Better is the relentless Barraza, who has a convincing scene explaining her need to believe. Better yet are the aforementioned newbies. Morgan Lily is very good at playing a young girl, mute with abandonment issues and her late night scene at the wall is very effective, almost creepy (shades of Pellington's earlier films). Stage actress Rachel Seiferth as the coke-bottle-glassed Patience tuned in to Henry's melancholy is a real find with a great and unusual face and almost otherworldly presence. "Henry Poole Is Here" is for those who like to believe in miracles in lieu of real life and it skips along with the bouncing ball of all the pop lyrics it's embellished with.