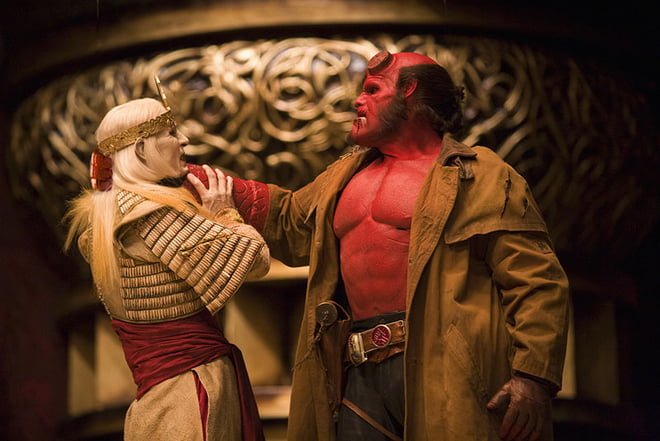 Underworld Prince Nuada (Luke Goss of "Blade II, Unearthed") is tired of having stayed within his own world of magical creatures for centuries in order to keep mankind blissfully unaware, and so a certain red superhero will be roused from his comfy, beer-drinking life with pyrokinetic girlfriend Liz (Selma Blair, "Hellboy," "Feast of Love") and their pet cats to take on the long dormant robotic forces Nuada awakens in "Hellboy II: The Golden Army."

Writer/director Guillermo del Toro ("Hellboy," "Pan's Labyrinth") returns to the Mike Mignola comic book character but puts his own indelible stamp on things. Featuring far more creatures than the first outing, "Hellboy II" echoes the creepy weirdness of "Pan's Labyrinth's" monsters reflected through a warped sense of humor. Some of the extended fight sequences grow a bit wearying, but on the whole the movie's a blast - where else can one see a blotto red devil beast and humanoid amphibian massacre "I Can't Smile Without You?" Before del Toro's signature clockworks opening credit sequence, he provides the Golden Army's back story in a thoroughly charming prologue. A young Hellboy ("The Orphanage's" makeup artist Montse Ribé) begs a bedtime story from his 'father,' Professor Trevor 'Broom' Bruttenholm (John Hurt, "Hellboy," "Indiana Jones and the Kingdom of the Crystal Skull") on Christmas Eve at Douglas AFB. The Professor tells the story of how King Balor (Roy Dotrice, "The Scarlet Letter") commissioned an indestructible army of 70 times 70 that could only be led by one wearing a golden crown fashioned from three distinct pieces. Balor kept one and gave the other two pieces to his children, Prince Nuada and Princess Nuala (Anna Walton). Back in present day New York City, a piece of that crown is about to be auctioned off at Blackwoods when Nuada appears with his henchman troll Wink (Brian Steele, "Hellboy," "Doom") and two crates of toothfairies, cute little creatures named for their habit of going for the teeth first in their pyranha-like feeding frenzy. At the top secret Bureau for Paranormal Research and Defense (B.P.R.D.), Hellboy's is taunting Tom Manning (Jeffrey Tambor, "Hellboy," TV's "Arrested Development") with his continual failure to be discrete in the 'real world' and having trouble at home. Liz is blazing mad about Red's slovenly ways, but it is something else that is eating her, something which empath Abe (Doug Jones, "Hellboy," "Pan's Labyrinth") figures out is pregnancy. When they get the call to respond to the carnage at Blackwoods, Hellboy assures Manning he'll be 'like a shadow' in exchange for a couple of Cubanos. The team is swarmed by the fairies and Hellboy ends up on the evening news. And so a new agent is called in to keep Red in line. Johann Krauss (voice of "The Family Guy's" Seth MacFarlane) is a protoplasmic mystic contained in a suit like a deep sea diver's. He's also German, which does not go over well with the devil-man rescued from the Nazis as a baby (and is the source for many amusing barbs from the pointy-tailed one). In order to stop Nuada, the B.P.R.D. needs access to the Troll Market, which Johann gains after outing one disguised as a bag lady (Jeanne Mockford). In this Star Wars bar type of place, the agents go unnoticed, but when Abe finds Princess Nuala, who is fleeing her brother after he killed their father, Nuada finds them and pits Wink against Red. They manage to escape with Nuala back to their Trenton HQ, but Nuala, who shares empath abilities with the smitten Abe, is also psychically tied to her twin and Nuada reappears to kidnap her back to Bethmoora. Abe, who finds Nuala's hidden piece of the crown, has his own agenda when the B.P.R.D. head to Northern Ireland to face Nuada. Del Toro has a fanciful visual style and "Hellboy II" explodes with treats (and tricks!) for the eyes, but he has paid very careful attention to his storytelling here. In the first film, he established his characters. In his second he lays down a mythology, testing Hellboy's allegiance, giving Liz a difficult and fateful choice via an Angel of Death (fantastically realized, a sibling of "Pan's Labyrinth's" Pale Man) and, in keeping with all the dualities, announcing the couple's impending twins. The film's humor is always clever with running jokes (John Landis's "See you next Wednesday" signature honored) and background gags. Intelligent commentary is contained in throwaway bits (a TV anchorman discussing interspecies marriage). In a scene intended to give Red pause about humankind's worthiness of his protection, del Toro also lays the groundwork for his fitness for fatherhood. The returning cast are all terrific, with Perlman born to play his 'Everyman' devil and Blair his dark other half, brimstone and fire. Doug Jones, who plays several characters in this outing, makes Abe a fastidious gentleman one cannot help but hold affection for. Seth 'Stewie" McFarlane is aces voicing Krauss and Walton is a winsome princess. Nuada is an odd creature - Marilyn Manson by way of "Hellraiser's" pinheads with the voice of David Bowie. Technically, the film is always a delight for eyes and ears with seamless effects and fantastical creatures - even the professor's story is envisioned via puppets of entirely their own world. "Hellboy" was fun, but "Hellboy II" is even better. Del Toro spins a multi-layered tale in a uniquely imagined world that is intelligent but playful.