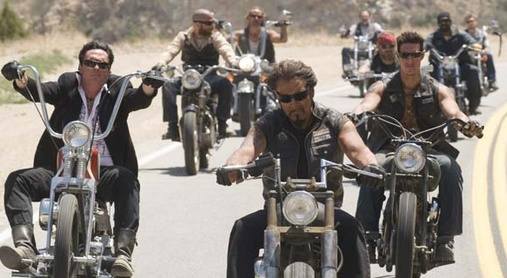 With the encouragement of fan and producer Quentin Tarantino, writer/director Larry Bishop ("The Savage Seven") returns to his roots, the biker flick, and a starring role as Pistolero, a member of the Victors motorcycle gang trying to avenge the fate of one of their own when rival gang the 666ers gave him a "Hell Ride."

Just what we need - another faux grindhouse flick that would have been better suited to one of "Grindhouse's" trailers than a full length feature. Bishop, who looks like a well trimmed beatnik that's been to the tanning booth once too often, is an odd choice for a hero and chic magnet and his pun filled dialogue is mostly groan inducing. Still, there is some fun to be had with Pistolero's sidekick, the Gent, confidently played by Michael Madsen ("Kill Bill") in a genre-defying tux. Also good is Eric Balfour ("The Texas Chainsaw Massacre" remake), giving his plot point character some real personality. Bishop tries some Tarantinoesque time line shuffling but achieves less impact. We find Pistolero lying on his back in the desert, an arrow protruding from his belly, some amusing observations escaping his lips, and a chick (Leonor Varela, TV's "Cleopatra," "Voces inocentes") to crouch over his face and pull the weapon out. 'Thirty-two years earlier' a young boy tends to his bike outside a motel where bikers gather. A beautiful woman, Cherokee Kisum (Julia Jones) is being tortured before being lit on fire. 'Thirty-two years later' we see the same fate befall St. Louie (Pete Randall) and it's somehow connected via the badder bike gang, the 666ers, led by the Deuce (David Carradine, "Kill Bill"), now more businessman than biker, and Billy Wings (Vinnie Jones, "Snatch," "X-Men: The Last Stand"). After burying their buddy, each Victor tossing in his empty Heisler bottle (a fictional brand of beer used in TV shows and movies, an in joke akin to Tarantino's Red Apple cigarettes), a party ensues and Pistolero wanders off with three woman. His no interruptions during sex rule mean he, Commanche (Balfour) and the Gent will wend their separate ways towards a showdown with the 666ers. Commanche will escape a set up when he comes up against Eddie “Scratch” Zero (Dennis Hopper, "Easy Rider," "Swing Vote"), who unbeknownst to him is a fellow Victor adept at outwitting the enemy by faking his own death. Bishop features several scenes with Varela that feature her coiling about like a snake spouting allegorical come-ons (she's his devil in hell, his hellhole; she's on fire and he's got the hose, etc.) plus assignations with multiple other woman and an obvious reverence for past love Cherokee (confusingly hooked up with Deuce, when flashbacks only show Victors in residence) and yet never projects the charisma or machismo to draw this level of female attention. There's also a ludicrous peyote scene with cheesy effects and an additional opportunity for female nudity. Billy Wings is shown to be a real psychopath by his treatment of some strippers, then offered up for a sadistic murder at the hands of Pistolero. The whole showdown has the air of anticlimax about it. Never once does "Hell Ride" feel like a member of the 70's genre it seeks to recapture. It's all too self aware and too obviously riding its executive producer's coattails. The sad fact is, Madsen riding a chopper is cooler than the sight of Hopper in a suede fringed jacket, proof that you can't go home again.