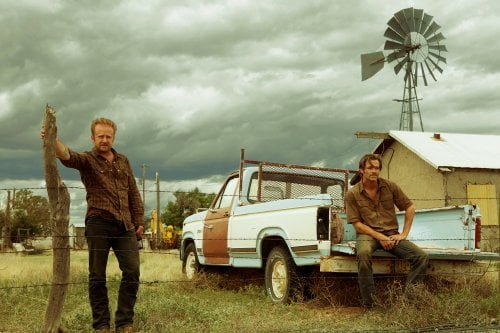 Toby Howard (Chris Pine, "Star Trek Beyond") is an unemployed single dad trying to forge a future for his sons, but with the loss of the family farm looming, he agrees to rob the very bank that is foreclosing on them with his rash ex-con brother Tanner (Ben Foster, Pine's "The Finest Hours" costar). The duo knock down branch after branch until they come under the suspicion of the Texas Ranger (Jeff Bridges, "True Grit," "The Giver") out for one last score come "Hell or High Water."

Wow. Not since "No Country for Old Men" has a modern Western been so thematically rich. With a script from "Sicario's" Taylor Sheridan, director David Mackenzie's ("Starred Up") terrifically entertaining crime thriller encompasses America's historical land grabbing from its own people from the perspective of two matched sets of 'brothers.' The stage is immediately set as Giles Nuttgens's ("Dom Hemingway") camera follows a woman (Dale Dickey, "Winter's Bone") on her way to work. '3 tours in Iraq but no bailout for people like me' is spray painted on the side of a building, one of few without a For Sale sign in front of it. Elsie's accosted by two ski-masked men as she opens up the Midland Bank, thrown to the floor by Tanner as Toby works to defuse the situation. They take loose money from teller drawers and move onto their next job, an old cowboy customer shooting at their fleeing vehicle. No matter. These boys' plan includes stealing getaway cars they later bury with a backhoe. But Tanner doesn't always think ahead, something Toby learns after they two eat in a diner, Tanner hitting the bank across the street during his alleged bathroom visit. Good thing Toby tipped their waitress (Katie Mixon, TV's 'Mike & Molly') well, his good looks and generosity buying loyalty. As Marcus Hamilton sits at his desk pondering his mandatory retirement notice, his partner Alberto (Gil Birmingham, "Twilight's" Billy Black) brings his attention to a series of low level bank robberies the Feds aren't interested in. After making his usual derogatory but affectionate slurs about Alberto's Indian/Mexican heritage, Marcus focuses. These boys, he says, are saving for a specific purpose and he thinks he knows their next target. Within this framework, the filmmakers nudge their audience to consider such ideas as the 2008 subprime mortgage crisis as not all that different from the U.S. Government stealing land from the Indians, that oppression leads to violence, that oil drives greed and corruption, why common folk champion criminal underdogs and the strong bonds that can exist between diametrically opposed men with a common goal. But Mackenzie and Sheridan are deft enough that you can enjoy their film without thinking about any of these things, many humorous passages distracting from the stakes at hand. (A bit featuring Marcus and Alberto in the T-Bone Cafe is an instant classic that can stand alongside "Five Easy Pieces'" diner scene. Another with Toby and Turner visiting their lawyer champions ironic criminality as American can-do spirit.) Mackenzie throws us right into the action, our four protagonists' backgrounds slowly coming into focus. Pine's Toby has been ground down, having lost his job, his mother after a prolonged illness for which he was the sole caregiver, his wife (Marin Ireland, "Hope Springs") and now, potentially, his farm and the unshaven actor radiates burdened decency. Foster's Tanner is a black sheep with an impish charm, feeling responsibility to none but Toby. Foster's sparkling eyes and quick wit add fuel to his volatile threat. Jeff Bridges, speaking with a gravely drawl like he's got a mouth full of marbles, is a good old boy on the surface with depths of understanding and a bloodhound's keen sense. He's never been better - watch him in a climactic scene where the actor combines euphoria with grief - he's devastating. Birmingham's stock is sure to shoot up with his portrayal of the put upon Alberto, a religious family man just starting to get into the swing of his buddy's macho insult banter. But this is the type of film where every role, down to the smallest, has been carefully cast. Margaret Bowman ("No Country for Old Men") is exceptional as that T-Bone waitress. Note Amber Midthunder in a state of shock as the bank teller paid a impulsive visit by Tanner. Nuttgens's cinematography makes us feel the dusty heat of Texas, but also finds what makes men tick in his liberal use of close-ups. Nick Cave and Warren Ellis's ("The Proposition") piano and bass-driven score subtly propels the action with Native American percussion. Art direction and costume all convey the sense of a depressed heartland. The film builds to a tragic climax, one in which both sets of men pay dearly, yet the romance of the pursuer and his pursued continues by two greatly changed by their experience. "Hell or High Water" is one helluva movie. Grade: